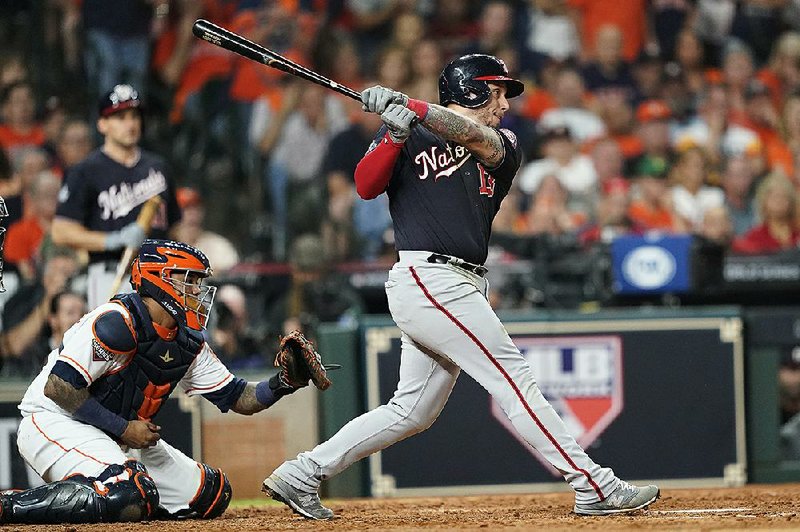 Washington’s Asdrubal Cabrera hits a two-run single during a six-run seventh inning for the Nationals in Game 2 in Houston. The Nationals romped 12-3, winning in Houston for the second consecutive night.

HOUSTON -- Justin Verlander, Joe Smith and Will Harris tossed the ball at Minute Maid Park as slanting light from the late-afternoon sun streaked through the large glass panels and across right field.

After arriving home at 4:30 a.m., they were back in familiar surroundings, but home, sweet, home has been anything but in this contrarian World Series. For just the third time in Series history, the visiting team has won the first five games.

In a tale of two cities, the Nationals outscored the Astros 17-7 in the first two games at Minute Maid Park last week. After the travel day, Houston had a capital time in Washington, outscoring the Nats 19-3.

"I think I would have rather played the last three games on the road, with the outcome," Washington shortstop Trea Turner said with a chuckle after Houston swept three games at Nationals Park.

This is the first time the road team has won the first five games since 1996, when the Braves rocked the New York Yankees by a combined 16-1 in two games to spurt ahead on the road, lost the final three games played at Atlanta-Fulton County Stadium, then were beaten in Game 6 in the Bronx.

Going back to the Windy City Series of 1906, when the home team alternated each day, the Chicago White Sox won Games 1, 3 and 5 at the West Side Grounds, and the Cubs took Games 2 and 4 at South Side Park. The White Sox finally gave the home faithful something to cheer in Game 6, bursting to a six-run lead and winning 8-3.

Houston was 60-21 at Minute Maid this season, the best home record in the major leagues since the 1998 New York Yankees. Washington's 50 home wins tied for third most in the National League.

But the World Series has been a bon voyage of late. Including Boston's victories at Dodger Stadium in Games 4 and 5 last year, visiting teams have won seven consecutive World Series games for the first time.

Washington first baseman Ryan Zimmerman doesn't think too much of the trend.

"I don't think home and road matters in baseball, other than the walk-off, obviously," he said. "During the season when you're home for a 10-game homestand and you get to sleep in your bed and other teams are maybe on a long road trip, but during the playoffs you have off days."

Washington and Houston looked like two different teams after the change of ballparks. The Astros stranded 20 at home and were 3 for 17 with runners in scoring position, then went 7 for 21 with RISP in D.C.

After going 7 for 21 with runners in scoring position on the road, the Nationals were 1 for 21 at home.

Some players have said over the years that it's easier playing on the road, without the distraction of dealing with well-intentioned but time-consuming family and friends. Nationals Manager Dave Martinez didn't think there was an advantage to being cosseted in a hotel.

"I'm not a big room service guy," he said. "I like to go out and eat. Houston has got some pretty good restaurants that I like."

Home teams are 43-24 in Game 6, winning five of the past six. The exception was 2016, when the Cubs overcame a 3-1 Series deficit and took the final two games in Cleveland for their first championship since 1908.

"We kind of had a chip on our shoulder, wanting to go in there and prove something," he said. "We're going back to their place where we've had some success. Hopefully we can have that villain mentality and come together as a group." 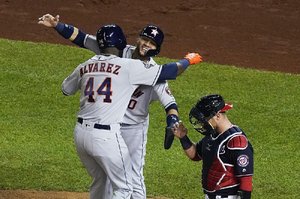 Photo by AP/PABLO MARTINEZ MONSIVAIS
Houston’s Yordan Alvarez is congratulated by Yuli Gurriel after hitting a two-run home run during the second inning Sunday of Game 5 of the World Series against the Washington Nationals in Washington. Houston went on to win 7-1 to take a 3-2 lead in the series, winning all of their games in Washington.