Spresser lifts Fayetteville out of its early doldrums 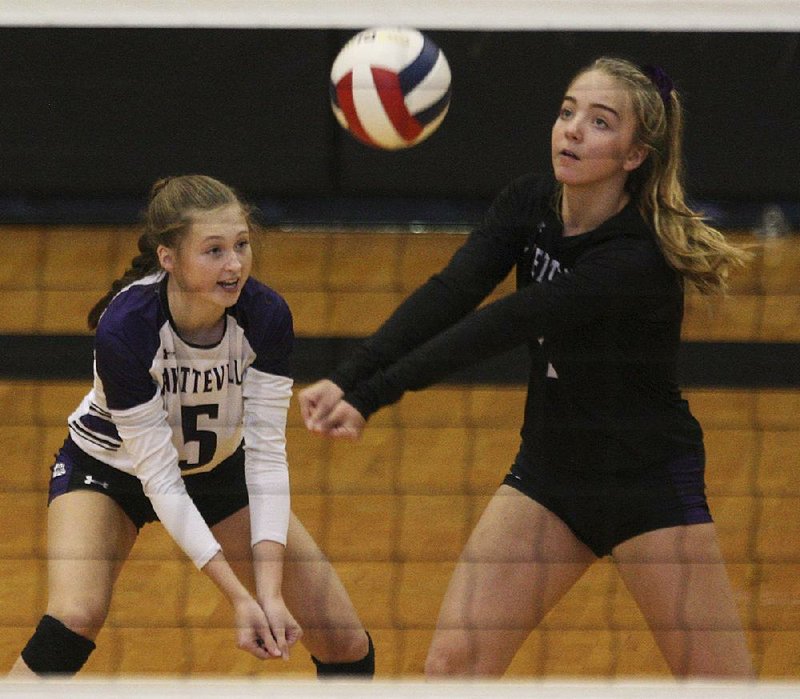 Fayetteville’s Gracyn Spresser (right) hits the ball Tuesday in front of teammate Sadie Thompson during the Lady Bulldogs’ 25-18, 25-9, 25-8 victory over Mount St. Mary in the Class 6A state volleyball tournament in Cabot. More photos are available at arkansasonline.com/1030volleyball6A/.

CABOT -- Fayetteville got off to a slow start in its opener at the Class 6A state volleyball tournament, but junior Gracyn Spresser stepped to the service line and everything turned in the Lady Bulldogs' direction.

Spresser served up four of her seven aces to key a 6-0 run midway through the opening set to lead Fayetteville to a 25-18, 25-9, 25-8 victory over Mount St. Mary on Tuesday afternoon at Panther Arena.

Mount St. Mary, the No. 6 seed from the 6A-Central, held the lead early in the opening set, but a service error by the Belles tied the score at 13-13. Spresser then led Fayetteville on a 6-0 run thanks in part to three aces for a 19-13 advantage. The Lady Bulldogs, the No. 3 seed from the 6A-West, went on to win the first set and were never really challenged the rest of the way.

Fayetteville Coach Jessica Phelan thought her team was having trouble getting comfortable in its state tournament opener. Spresser agreed.

"I don't know how to explain it. We had to settle in," Spresser said. "The first 10 points we had a lot of nerves. After that, we settled in and played great."

Spresser anchored the defense with 21 digs and helped the Lady Bulldogs (27-6) settle down with her strong serving.

Phelan said Spresser's experience has been a key to Fayetteville's success all season, but was especially big Tuesday.

"I think this time of year you want to rely on kids that have been there, and this is her third state tournament," Phelan said. "I thought she played really well, and she really brought her game up to another level. That service run really helped get us some separation there. And then defensively she really kept us in a lot of points."

Fayetteville advances to take on defending state champion Conway at 3 p.m. today in a quarterfinal match.

"We started with great, great energy," he said. "Beginning the second set, it was a different story. I think after losing that first set, we were a little bit down. We struggled with our serve recieve, and we were out of system a lot. In the third set, we tried to change our defense, but it was too late."

Northside Coach Matthew Waack said it was his team's first state tournament victory since at least 2006.

Sophomore Ryley Martin led Rogers (12-22), the No. 5 seed from the 6A-West, with a match-high 21 kills, while Gracie Carr added 13 and Abby Harris had 12. Martin, Carr and Harris each came up with double-doubles. Martin and Carr added 15 and 11 digs, respectively, while Harris dished out 11 assists. 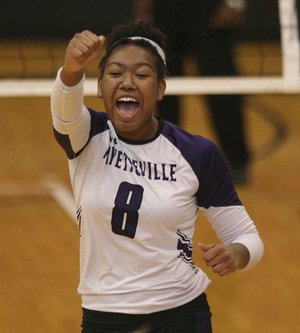 Print Headline: Spresser lifts Fayetteville out of its early doldrums