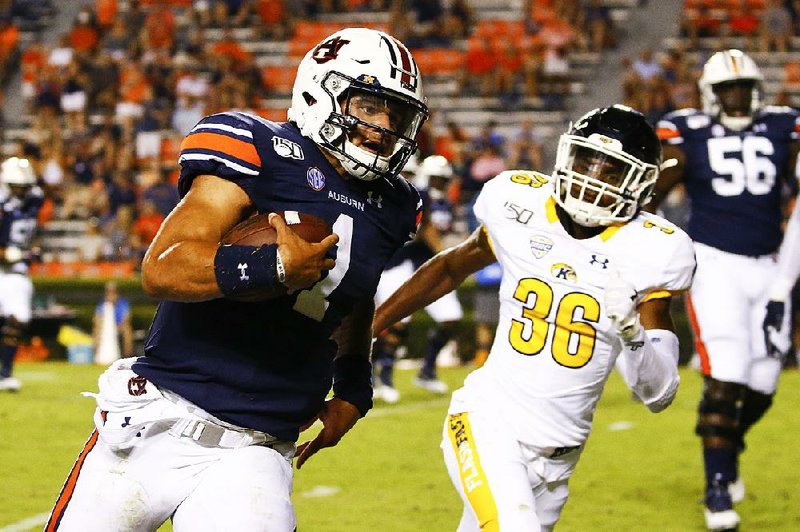 Auburn backup quarterback Joey Gatewood, a redshirt freshman who was beaten out for the starting job by true freshman Bo Nix in preseason camp, has left the team and is entering the transfer portal.

Gatewood, a four-star recruit from Jacksonville, Fla., played in all of Auburn's first eight games, but got limited snaps off the bench behind true freshman starter Bo Nix.

"I really appreciate Joey," Malzahn said. "The thing about it, when he didn't win the job earlier, he chose to stick around.

"Most quarterbacks this day and time would have quit, and he didn't do that."

Malzahn said he met with Gatewood on Monday before practice.

"He's just at a point where he wants to be a starting quarterback and feels like he needs to start looking for schools now so he can find the right spot, and I respect that," Malzahn said. "He's a fine young man, and I really appreciate everything Joey's done for our program.

"Everybody in our program will be rooting for him moving forward."

With Gatewood's departure, redshirt freshman Cord Sanford -- who is 24 years old and came to Auburn after playing professional baseball as an outfielder in the Philadelphia Phillies organization for six seasons -- is the Tigers' backup quarterback.

"Cord's been with us and understands what we're doing," Malzahn said.

Beating Arkansas by 41 points wasn't enough for Alabama to stay atop The Associated Press Top 25 poll.

LSU, which beat Auburn 23-20 at home, leapfrogged over Alabama to take over the No. 1 spot the Crimson Tide had held for four weeks since replacing Clemson on Sept. 29.

It's the first No. 1 ranking for LSU since 2011, when the Tigers beat the Tide 9-6 in overtime in the teams' regular-season meeting, but Alabama won the rematch 21-0 in the Sugar Bowl to take the national championship.

"We don't pay too much attention to that," LSU Coach Ed Orgeron said on Wednesday's SEC coaches teleconference when asked about his team being ranked No. 1. "Obviously it's great for our school, it's great for the team, it's great for recruiting. But we've still got a lot of games left to play.

"When the final poll comes out, that's the one that matters. So we're aiming for that. This is not a finish line for us. This is just the start."

The two points separating LSU and Alabama in this week's poll is the closest in an AP poll since No. 1 Florida State also led No. 2 Auburn by two points on Oct. 5, 2014.

Alabama Coach Nick Saban said quarterback Tua Tagovailoa returned to practice Wednesday for the first time since undergoing surgery for a high ankle sprain suffered in the Tide's 35-13 victory over Tennessee on Oct. 12.

Saban said he still doesn't know whether Tagovailoa will be ready to play against LSU on Nov. 9 after Alabama's open date this Saturday.

"His rehab is progressing well," Saban said Wednesday on the SEC coaches teleconference. "It'll be a game-time decision based on how he progresses. I don't think there's anything else I can really say about that."

LSU Coach Ed Orgeron said he expects Tagovailoa to play against the Tigers.

"No doubt, we're preparing for him to play, and I think that he will play," Orgeron said on the SEC coaches call. "Knowing the competitor that he is, he's going to be in that game."

Bowden in a rush

The SEC's best rusher might be a receiver playing quarterback.

Kentucky junior Lynn Bowden, who moved from receiver to starting quarterback three games ago against Arkansas because of injuries to Terry Wilson and Sawyer Smith, is averaging 8.0 yards per carry at his new spot.

Bowden has rushed 62 times for 499 yards in starts against Arkansas, Georgia and Missouri, and led the Wildcats to a 2-1 record in those games.

"He's done a remarkable job," Kentucky Coach Mark Stoops said. "I think the thing that goes undervalued is just all that he's doing. It's a lot more than just a good athlete back there taking a direct snap and running around, making plays.

"He's doing a great job of directing our offense. The fact that he's so intelligent and can handle a lot helps [offensive coordinator] Eddie Gran and our offensive coaches really put in a good plan. We put quite a bit of deception in there, but also quite a bit of reads."

Tigers Coach Barry Odom said Bowden has benefited from running behind a good offensive line, but he also has done a lot himself by reading the blocks.

"He's an explosive, dynamic playmaker, there's no question about that, but his patience and his vision are what I think sets him apart," Odom said. "That sounds easy to be patient, but that takes a feel, that takes a trust, that takes an understanding."

Tennessee Coach Jeremy Pruitt was ready to head home from the office about 11:30 p.m. after the Volunteers' 41-21 victory over South Carolina, but first he had to make a stop.

Pruitt's wife, Casey, who is six months pregnant with the couple's third child, called with a late-night food craving.

"My wife asked me to stop and get her something to eat," Pruitt said at his weekly news conference Monday. "At 11:30, there's not a whole lot of spots, so I got her some French fries."

"If Mama ain't happy, ain't nobody happy," he said.

Alabama has the SEC's longest home winning streak at 31 games after beating Arkansas 48-7 on Saturday night at Bryant-Denny Stadium.

The Tide had shared the record with Florida, which won 30 consecutive home games between 1994-99.

LSU no longer is perfect in the red zone.

The Tigers had scored on 45 consecutive trips inside an opponents' 20-yard line going back to its final four last season, but the streak ended when Auburn stopped receiver Ja'Marr Chase on fourth down at the 1 on a screen pass.

LSU has scored on 43 of 45 red-zone trips this season, with 34 touchdowns and 9 field goals. That's the most red-zone scores of any team in the country. Oklahoma is second with 40 red-zone scores in 44 trips.

Notre Dame is perfect in the red zone, but on just 24 trips with 21 touchdowns and 3 field goals.

• Missouri quarterback Kelly Bryant left last week's game at Kentucky with a hamstring strain, but Coach Barry Odom said he should be ready to go when the Tigers play at Georgia on Nov. 9 after an open date.

• Florida has won six games in which it trailed going into the fourth quarter since the start of the 2018 season under Coach Dan Mullen.

• Texas A&M did not allow a sack for the first time this season in the Aggies' 49-30 victory over Mississippi State.

Pitts figures to be a key target for quarterback Kyle Trask against Georgia, which still hasn’t allowed a rushing touchdown this season. Pitts, a 6-6, 235-pound junior, leads SEC tight ends with 35 catches for 391 yards. He’s made at least four receptions in all five of the Gators’ SEC games. “He’s a big guy, he’s a true 6-6, his catch radius is out of this world,” Georgia safety J.R. Reed said. “So we have to be real physical and be real tight in coverage.”

The winner of the Florida-Georgia game at Jacksonville, Fla., will take control of the SEC East race and stay in the hunt to make the College Football Playoff. The loser probably can start making bowl plans for Orlando or Tampa. Florida (7-1 4-1 SEC) has a 6-5 lead in the series over the past 11 games, but Georgia (6-1, 3-1) has won two in row under Coach Kirby Smart. Don’t be surprised if it’s a low-scoring game with Florida’s pressure defense and Georgia’s inconsistency on offense. Georgia is favored by 6 1/2 points.

2013 The last time Texas A&M swept Ole Miss and Mississippi State before beating the Rebels 24-17 and the Bulldogs 49-30 this season.

8521 Margin by which Florida has outscored opponents in the fourth quarter.

211 South Carolina record for career receptions for senior Bryan Edwards. He caught eight passes for 83 yards against Tennessee to pass Kenny McKinley, who had held the record with 207 receptions from 2005-08.

“We’re going to come for their heads. I mean, we’re going to do what we need to do.” — LSU receiver Justin Jefferson on playing Alabama

“We’re 5-3 and we’ve earned 5-3. It’s not where anybody wants to be. Right now that’s who we are.” — Missouri Coach Barry Odom on the Tigers’ back-to-back losses at Vanderbilt and 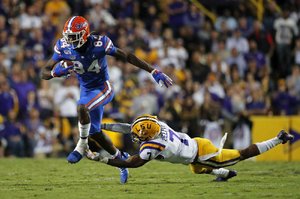 Photo by AP/GERALD HERBERT
Kyle Pitts (84) figures to be a key target for quarterback Kyle Trask against Georgia, which still hasn’t allowed a rushing touchdown this season. 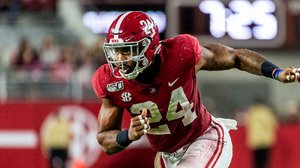