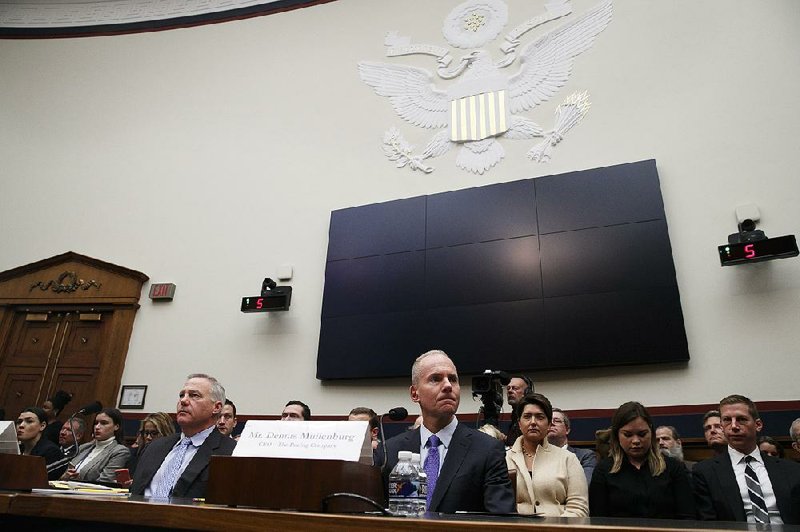 Facing Congress for the second day in a row, Boeing's chief executive, Dennis Muilenburg, was confronted by irate lawmakers who presented new evidence that people inside the company raised concerns during the development of the 737 Max, which crashed twice in five months and left 346 people dead.

Rep. Peter DeFazio, D-Ore., began the hearing before the House Transportation and Infrastructure Committee by presenting several documents that offered new information about how Boeing designed an automated system in the plane, known as the Maneuvering Characteristics Augmentation System, which was later found to have played a role in both crashes.

In a partially redacted email that DeFazio displayed, a Boeing engineer raised concerns in 2015 about whether the system was vulnerable to malfunctioning if a single sensor failed. That is precisely what happened in both doomed flights: a Lion Air flight that crashed off the coast of Indonesia in October 2018 and another 737 Max that went down in Ethiopia in March.

Another image presented by DeFazio showed that Boeing employees considered putting in the cockpit an alert for a failure of the system, but the feature never appeared on the plane. John Hamilton, a vice president at the company, said the light would indicate only when the system wasn't triggering when it was supposed to.

A third document showed that in June 2018, months before the Lion Air flight, Boeing employees said that if pilots took 10 seconds to respond once thes ystem was activated, the result could be "catastrophic."

Together, the newly public documents added to evidence suggesting that numerous people inside Boeing were aware of the potential dangers of the new system. The representatives also questioned Muilenburg on messages by Mark Forkner, the plane's chief technical pilot, who said in private messages during the plane's development that he was having trouble with the system during simulator training and had unintentionally lied to regulators.

Wednesday's hearing in the House followed a hearing Tuesday before the Senate and comes a year after the crash of Lion Air Flight 610 off the coast of Indonesia, in which 157 people died. Less than five months after that accident, the crash in Ethiopia killed 189 people.

The plane has been grounded since soon after the second crash, and the company faces several federal investigations into the design of the plane, including a criminal inquiry led by the Justice Department.

In another emotional moment during Wednesday's hearing, Rep. Albio Sires, D-N.J., read from an email sent to the head of the 737 program in 2018, from a Boeing employee complaining of fatigue and safety concerns on the production line.

"Frankly right now all my internal warning bells are going off," the employee wrote. "And for the first time in my life, I'm sorry to say that I'm hesitant about putting my family on a Boeing airplane."

Rep. Stephen Cohen, D-Tenn., was aggressive in his questioning of Muilenburg, repeatedly asking him why he had not taken a pay cut, despite 346 people having lost their lives in the two 737 Max accidents.

"What does accountability mean?" Cohen said. "Are you taking a cut in pay? Are you working for free from now on until you can cure this problem? These people's relatives are not coming back. They're gone. Your salary is still on."

Muilenburg's face reddened as he noted that the board determines his pay.

The barrage of questions seemed to strike a chord with the cluster of more than a dozen family members of victims gathered in a corner of the hearing room. Chris and Clariss Moore, the parents of Danielle Moore, who died in the Ethiopia crash, began to cry, and a man took tissues to them.

On Tuesday, Muilenburg told senators that the company would have grounded the plane sooner if it had more complete information. He also acknowledged for the first time that he was made aware of a top pilot's concerns about the plane before the second accident.

The admission likely will lead to more questions about why Boeing did not act more decisively before that second crash.

"If we knew everything back then that we know now, we would have made a different decision," Muilenburg said.

The crisis has cost Boeing at least $8 billion and roiled the global aviation industry. Muilenburg said in his opening remarks Tuesday that the company had "made mistakes," and he vowed to redouble its focus on safety.

Bayihe Demissie, husband of Elsabet Menwyelet, a flight attendant who died on the Ethiopian flight, said Muilenburg seemed genuinely apologetic and the conversation was "a little bit productive."

"It was not an easy meeting. We were straightforward with him, and he tried to be direct with us," said Demissie, who is now a single father of a 1-year-old.

But he added that the families wanted more transparency from Boeing about what the plane-maker knew about the flaws in the Max's design. "His actions will define him, not his emotions," Demissie said.

Speaking during Wednesday's hearing, Muilenburg's voice cracked as he recalled meeting with the family members.

"These stories, they're always going to be with us," he said. "I wish we could change that."