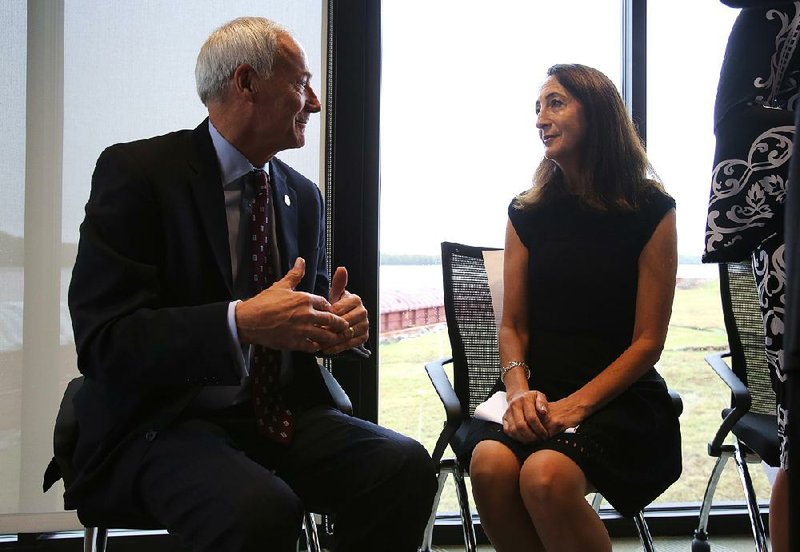 Gov. Asa Hutchinson speaks Wednesday with Janet Sofy, president and chief executive officer of HMS Manufacturing, after the company announced plans to open a manufacturing facility at the Port of Little Rock.

HMS Manufacturing Co. announced Wednesday that it will add about 90 jobs over the next two years in a production and distribution facility at the Port of Little Rock. HMS will begin hiring in the spring and plans to start manufacturing in a 550,000-square-foot plant by June, company officials said.

The company is a privately held, family-owned business that started in 1960 in Troy, Mich., before expanding into plastics manufacturing in 1987. Two co-owners, sisters Janet Sofy and Nancy Negohosian, attended the announcement at the Little Rock Port Authority offices.

"There were only three states that could do this, and you won out over all those other states," Sofy told the state and local officials attending the announcement. "The ease of doing business in Little Rock ultimately was the reason that we came here."

HMS designs and manufactures plastic houseware products in four categories: storage, waste, laundry and kitchen. Their brands include Hefty and Home Logic. "You probably have something in your house that holds your trash or your dirty clothes, and we make it," Negohosian said.

Product lines include laundry baskets, hampers, indoor and outdoor wastebaskets and kitchen and storage products. HMS products are sold in more than 10,000 stores worldwide, including retailers such as Walmart, Lowe's and Target. "Walmart is thrilled to have us in Arkansas," Sofy said.

The plant at 6901 Lindsey Drive will be the company's fourth manufacturing and warehouse facility in the United States. The others are in Kentucky, Ohio and Texas with an additional plant in Hong Kong. HMS is investing $20 million, which includes the purchase and renovation of the plant and purchase and installation of manufacturing equipment.

"Our growth has really been outpacing the capabilities of manufacturing in the United States and in China," Sofy said. "We found we were saying no to our customers on very important opportunities. So, we said, 'enough with that.' We went out and looked across three states for the possibility of what we could accomplish and felt very much at home in Arkansas."

Arkansas was attractive because it had an existing production/warehouse facility of more than 500,000 square feet that was serviced by rail lines. The quick access to roadways to move products also was a plus, Sofy said, adding that the "support we got here was overwhelming" and made for an easy decision to place a new facility.

Gov. Asa Hutchinson noted that HMS was one of the businesses he called in January, on his first day in office for his current term. "It is nice to see the fruition of that call," the governor said.

Little Rock Mayor Frank Scott Jr. also welcomed HMS officials to the city. "It is a great day in our city to have a woman-owned company here at the port that is committed to growth," Scott added.

In addition to the availability of ready-made infrastructure, Negohosian said that the local collaboration that HMS experienced during its search process was a deciding factor in selecting Little Rock.

"It's so important that we have collaboration between the private sector and the public sector down here in Arkansas ... and that's the best way to operate, we feel," she said.

HMS will build its manufacturing operation and add employees in two phases, according to Steven Bayird, who has been hired to run the Little Rock operation.

Hiring is scheduled to begin in March or April, with production expected to begin as early as June. "In the first phase, we'll hire 50 to 60 employees, and then we'll grow to 80 to 100 employees in the second phase," Bayird said.

HMS will install eight injection molding machines in the first phase and another seven machines in the second phase. About 100,000 square feet of space will house the manufacturing operations with the remaining 450,000 square feet available to store products that will be shipped out by truck. Raw materials, some from China, will be transported to the facility by rail.

To help land the manufacturing plant, the Arkansas Economic Development Commission has offered incentives that include a five-year cash rebate based on the number of jobs added; sales-tax refunds on building materials, taxable machinery and equipment for the project; and $500,000 from the governor's quick-action closing fund.

University of Arkansas-Pulaski Technical College in North Little Rock has been instrumental in planning workforce training for the manufacturing operation. School officials have met with HMS executives several times over the past year, outlining a plan to have Pulaski Tech involved in identifying potential workers and then training them once hired.

"We're going to help them get ready to go into production and assist them once they're in production," said Bentley Wallace, dean of the school of technical and professional studies at the community college. "A big part of the conversation with them early on and through their subsequent visits was could they be comfortable that there would be an adequate, highly skilled workforce available to them should they put an operation here."

Company officials offered no specifics on wages. "It depends on who we hire and how we hire," Sofy said.

Bayird, the plant manager, has been supervising production operations in Little Rock for other manufacturers at the port. He said the company is still considering its pay scales. "It will be a very competitive wage," he said. "I've worked in this area for the last 12 to 13 years so I know what other employers in the area are paying."

Once operating, HMS will add to the growing manufacturing industry in Arkansas. There are about 160,500 manufacturing workers in Arkansas, the fourth-largest employment sector in the state. Average wages in 2018 were $23.08 hourly or $48,006 annually, according to state figures.