CHEAP EATS: Sticking to the ribs best bet at Dickey's in Little Rock 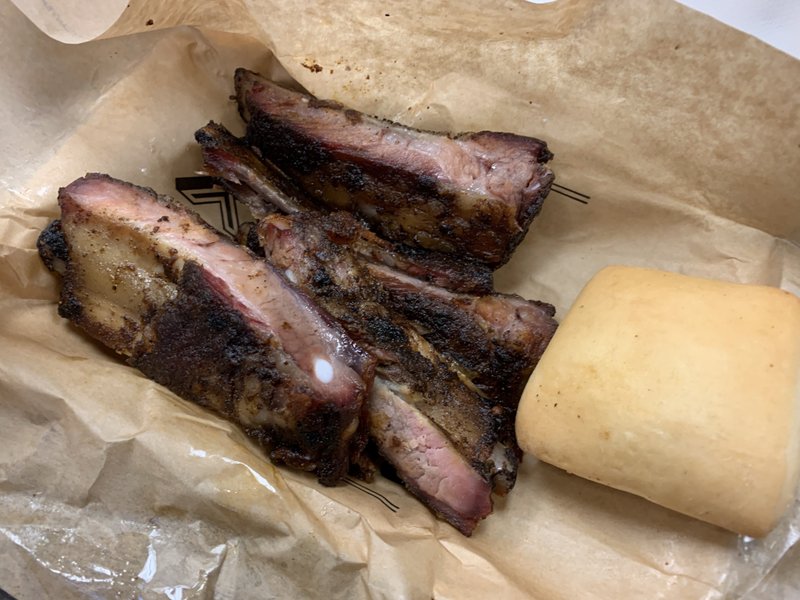 Dallas-based Dickey's Barbecue Pit is not new to this market — there has been an outlet in Bryant for some time, and a short-lived franchise was open for a few months in North Little Rock.

So it shouldn't be totally unfamiliar as franchisee Lonnie Shere sets up shop in a former Starbucks on North Rodney Parham Road.

Whether you will enjoy eating there depends on how you feel about the style of barbecue — folks have been known to fight practically to the death over how the meat is smoked and whether it's wet or dry and the attributes of the sauce(s) — and the virtues, if any, of chain vs. local.

Dickey's, since 2014, which used to use actual wood chips to impart a hickory flavor to its meats, now uses a pellet smoker, which uses compressed wood pellets made of a wood blend "specified by Dickey's, so the flavor will be the same no matter where in the world the store is located."

In other words, those chunks of wood that line the front of the production line are there for show.

It bothers some people, but we don't particularly object to pellet-smoked meat as long as it tastes good, and Dickey's mostly does. But we did encounter some goofiness in our order and dining process.

The new Dickey's is small — seats about 40 patrons at fairly close quarters. Enter and place your order at one end of the line; staff members assemble your choices in disposable baskets and containers on a paper-lined metal tray, which you carry yourself to a table which you bus yourself when you're done — just about everything except the tray goes into the trash.

The one distinguishing thing is Shere's repurposing of a 1941 Chevy pickup, repainted bright yellow with orange flames on the sides, as a patio table. Lousy weather prevented us from sitting there, but it's a fine conversation piece and a nice background for selfies.

We didn't have any problem with the six-bone Pork Rib Plate, which we got to go. The ribs and the roll came in one container; the sides (baked potato casserole and barbecue beans) came in separate little tubs. Five of the six ribs were close to fall-off-the-bone tender; the sixth actually was — we reached into the pile and pulled out just a bone and delved again for the meat. The flavor was good, though not so good that the sweet version of Dickey's barbecue sauce wasn't an enhancement. (Dickey's has three unexceptional, thinnish sauces — original, sweet and spicy; those dining in fish it out themselves from a warmer; they're prepackaged if you get them to go or if you just don't, for some reason, like them warm.)

Sides were a mixed bag. We enjoyed the potato salad, apparently ranch-based, and the potato casserole; the mac and cheese was cheesy but squishy and the barbecue beans, with one shred of meat in a sea of sweet sauce, were, well, meh. (We're told that next time we should order the creamed spinach. Who knew?)

For an extra buck upfront, you get an endlessly refillable (for $1) big yellow plastic drink cup.

The staff couldn't have been nicer or friendlier, but the service does need some coordination. In addition to the 2 Meat problems, on our first visit, we were asked three times by three different people what we wanted for our sides; on our second, the young man who totaled up our order got so involved in explaining the chain's points-based rewards system that he totally forgot to bag up and hand us our food.