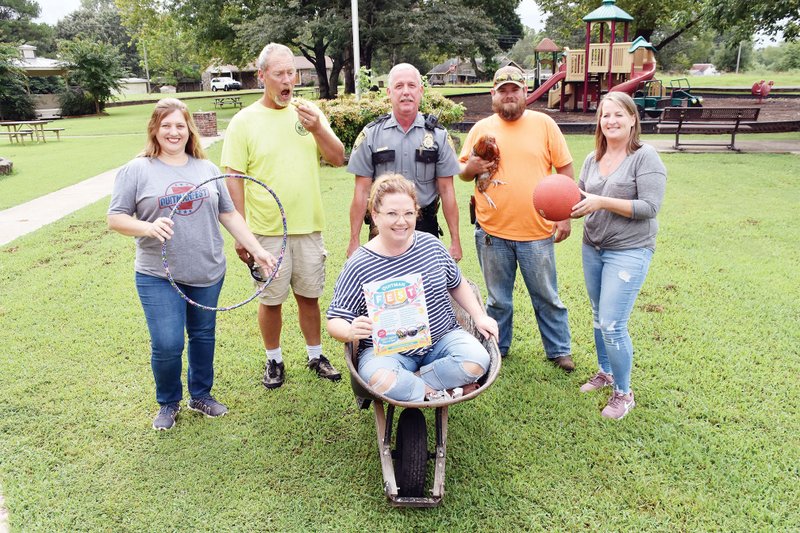 The city of Quitman plans to build a community center, and officials are counting on chicken bingo and a 5K race to help raise some of the money for the project.

Mayor Cyndi Kerr said the festival in the city of 768 residents is a tradition.

“Everyone looks forward to it because it’s basically like a big family reunion,” she said. “It’s one of the most important things we do here — bring people together to enjoy visiting and reminiscing.”

She got involved with the QuitmanFest committee when she was on the City Council.

The festival started as a way to support the ball fields in the city, Kerr said, “but we feel like the ball fields are at the point they can be maintained. Now [the event has] shifted to the city. This year, we have a community-center fund we’ve set up, and it will go toward that.”

A 1-cent sales tax was passed more than 10 years ago, she said, and proceeds supported building the ball fields at the sports complex, as well as building a library and community center, which the city doesn’t have.

Organizers said they aren’t sure how many years QuitmanFest has been held because it was suspended for a few years. Tonia Shue said she thinks that “technically, it’s the 12th one.”

Kerr said the free-admission festival prides itself on old-fashioned activities.

“A lot of the things do not cost money. That’s one of the things [participants] love about it. We’re wanting to keep it where families can afford to come out and play,” Kerr said. “Everybody enjoys the down-home events we have. Everybody loves that it’s kind of like stepping back in time, versus events in bigger places.”

Kerr is in charge of the 5K race, which starts and ends at the ball field. The entry fee is $25, and registration begins at 7:30 a.m. Preregistration to get a T-shirt is open through Monday. Participants may register online at www.quitmanfest.com or by calling Kerr at (501) 589-3312.

She said a lot of teenagers run the race.

“Last year, our [school-district] track team ran it. It was really nice to have that support from our school,” she said. “We welcome anybody who wants to do that.”

She said high school track teams can race at a discounted cost if they don’t want T-shirts. Everyone who pays $25 will get a goody bag, she said.

There is a $5 entry fee, and each child receives bubbles.

The hot-dog-eating contest is free, but Shue said she hopes more people have an appetite for the event this year.

“A lot of people go over there and eat one hot dog to get a free hot dog,” Shue said, laughing. “I’ve heard a lot of people throughout the year say, ‘I can’t wait for the hot-dog-eating contest, ‘cause I can eat more than that guy.’”

The winner last year was no Joey Chestnut, an American competitive eater.

“He only ate three,” Shue said of the QuitmanFest winner.

In addition to bragging rights, the hot-dog-eating champion gets a medal.

“All things we do like that are just for fun,” she said.

One of the more popular events every year is chicken bingo, the women said.

Squares on the ground are numbered, and tickets are sold for $1 each. When all the squares are sold, a chicken is released to wander and do his business. The person who owns the ticket to that square that the chicken marks wins half the pot, $50; the other $50 goes to the city.

“It’s pretty fun,” Kerr said. “We had a chicken that he didn’t go to the bathroom forever last year. It took us almost to the end of the day before we had a winner. Kids and adults love it; it’s amazing to me how many people love that part of it, but they do.”

Shue said the greased-pig race for kids is a big draw, too.

“Last year, we had people who drove from Little Rock because they had never heard of it; they wanted to come see what it was. Then they wanted their kid in there after they saw what it was,” Shue said.

She said that this year, there will be a petting zoo and pony rides, and the pigs will come from that vendor.

“If it’s hot, you don’t want to use the same little piggy for all the age groups. We let the little kids do it first — 4 and under. It’s the parents who decide. We had lots of 2-year-olds

last year; it was really cute. That little pig group lasted forever. They could not catch it, so we ended up, one of the parents kind of grabbed the pig to kind of slow it down a little so they could catch it. It’s pretty fun to watch,” Shue said.

Another activity is a Baggo tournament, which costs $20 a team to enter. The winning team gets a cash prize.

“There’s a whole circuit of Baggo people,” she said, adding that QuitmanFest is hoping to attract those groups.

Kerr said the event brings vendors and attendees from other cities. Attendance to the festival has been as much as 1,000 — more than the population of Quitman.

The event boosts the city’s economic development, she said, as well as provides money for the city’s projects. The community center is a project that can benefit all Quitman residents, Kerry said.

“We do not have land yet, but it’s something we’re starting to look at — what we want in it and how much land we need. Different people have different ideas of what should be in the community center; we’ve been all over the place with that. We’re a small city — we can’t have the community center that other people have. It might be a work in progress, and we’ll add on to it.”

But first, there is chicken bingo to play.