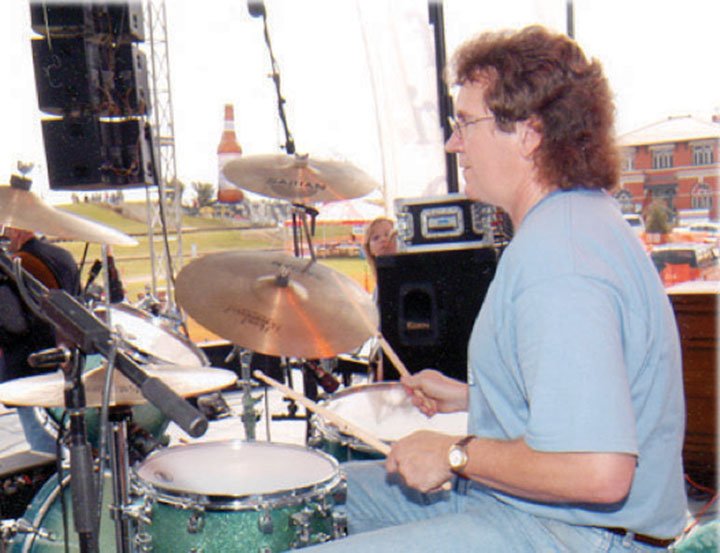 Daryl Cox, who died in 2012, is shown in this photo playing drums in the band Capitol Offense. Cox’s wife, Teri, started Daryl Music Makers as a way to honor her late husband’s love of music. Daryl’s Music Makers will host a battle of the bands on Saturday in the Cabot High School Fine Arts Center.

CABOT — A nonprofit group that helps bring the love of music to underprivileged countries will host its biggest fundraiser in Cabot on Sept. 7.

Daryl’s Music Makers will host the Battle of the Bands from 7-9 p.m. in the Cabot High School Fine Arts Center. The event will feature about nine bands from across the state.

“We’ve been around about seven years,” said Dixie Hardin, executive director of Daryl’s Music Makers. “It is an organization that was birthed out of an unfortunate tragedy. My friend Teri Cox — her husband, Daryl, who used to be in a band with Gov. Mike Huckabee, died in 2012. Daryl was a great guy, and lots of people in central Arkansas had the chance to get to know him. He worked at the state Capitol.”

Both Daryl and Teri Cox were members of the band Capitol Offense with Huckabee. Although the band doesn’t perform regularly, Teri is still a singer in the band.

Daryl Cox, who started playing drums in the sixth grade in Harrison, died March 16, 2012, after suffering a series of strokes that year.

“He passed away, and his wife, Teri, started this organization on behalf of him,” Hardin said. “Daryl’s Music Makers provides instruments, teachers and all the necessary supplies to help cultivate a lifelong love of music, education and faith in underprivileged countries around the world. We work with Haiti and the Dominican Republic, and the newest country we work with is the Philippines.”

Hardin said the organization gives funds, and places in those countries are able to purchase instruments and pay teachers’ salaries.

“We take on all the supplies that they need to have a music program established in those countries,” she said, “so that way, they can teach kiddos music, and they can start learning a trade over there. That’s our main goal — to empower children with hope and a future through music education.”

Teri Cox said Daryl’s Music Makers was started with the premise that music brings people together.

“Music connects in a language that is unspoken with words,” Cox said, “so it doesn’t matter what language you speak. Your heart speaks a language of music, no matter where you are.”

The Battle of the Bands is Daryl’s Music Makers’ primary fundraiser. Hardin said the organization previously hosted a Christmas dinner for area businesses.

“We’re taking that away and trying this Battle of the Bands,” she said. “It goes with who we are much better.”

“I think we have found the core of who we are,” she said. “I know it’s going to be an awesome and great event. It will make Daryl smile. He would be on the front row. Actually, that’s a lie. He’d be in the sound booth. That was his thing. If he wasn’t behind the drums, he had to be in the sound booth making sure everybody sounded great.

“I’m excited to see all the different groups that we have.”

Right now, Hardin said, there are eight bands signed up for the contest, and they are all from Arkansas.

“We’ve got all different kinds of music,” she said. “We’ve got an a cappella group. We’ve got some Southern rock and some Christian. We’ve also got some folk music.

“They are all coming together for a legit battle of the bands.”

The winner will receive a full day of recording at Blue Chair Recording Studios in Austin, free of charge. Hardin said there are other prizes as well.

Tickets are $5 and will be available at the door.

“There is a great buzz about it,” Hardin said. “As far as more bands, we probably could do one more band. We’re going from 7-9 p.m. They each have 12 minutes.

“If anyone is interested, they should definitely let us know.”

Bands who want to compete may go to www.darylsmusicmakers.com/battle-of-bands and fill out the form online.

“I will contact them as soon as possible,” Hardin said. “There’s only been one band that we couldn’t take. This is a family-friendly event, and we need to keep it that way.”

The money raised from the Battle of the Bands will go toward the goal of Daryl’s Music Makers.

“All of the money that comes through, other than what we have to pay for staffing the event, goes directly toward our programming in other countries,” Hardin said.

“We do music camps and go into places like churches,” she said. “We teach kids rhythms and beats. We spend about two days with them, and the kids will perform for their parents or church congregation.”

For more information about Daryl’s Music Makers, find the organization on Facebook or visit www.darylsmusicmakers.com.