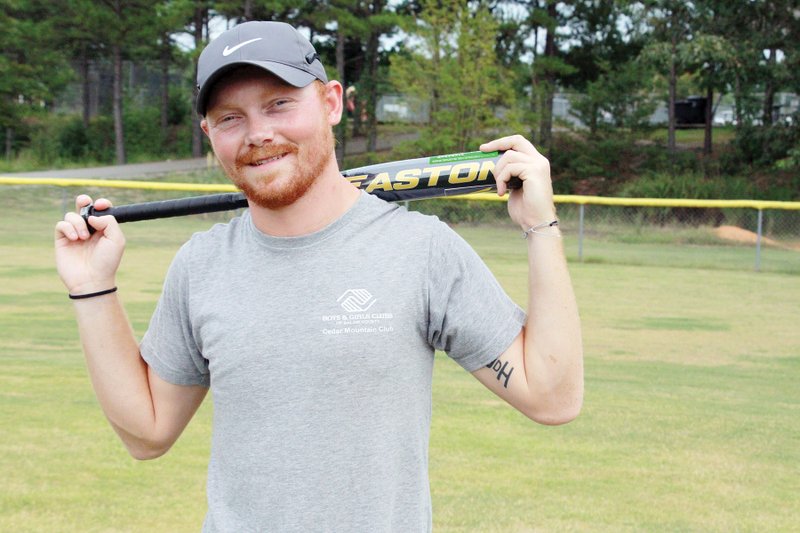 Colton Hooper is the new athletic director for the Cedar Mountain Club in Jessieville, which is a part of the Boys & Girls Clubs of Saline County. Hooper, who graduated from Jessieville High School in 2015, said the club “truly puts its focus toward the children over anything else, and that’s a cool thing to see.”

Colton Hooper never really envisioned himself working with kids, but once he started and saw what it was about, it was an easy decision.

“Honestly, it was whenever I heard the first kid’s story,” Hooper said, “like of him actually being upset about what was going on in his life and him talking about it — it gets you emotional and sticks you to the job.”

On July 29, Hooper was named interim athletic director for the Cedar Mountain Club in Jessieville, which is part of the Boys & Girls Clubs of Saline County.

Jasen Kelly, chief executive officer for the Boys & Girls Clubs of Saline County, said Hooper has been a part of the club since 2016 but has been involved with more than just athletics.

“He has been in other programs and has been pretty diverse and has a strong work ethic and has good communication skills,” Kelly said. “I think he will be a good fit as our athletic director.”

Kelly said that while it is an interim position as of now, if Hooper does well in the fall, he could possibly be hired on permanently in January.

“He has a vast knowledge of all the sports that we provide in the Jessieville and Fountain Lake area, including flag football, soccer, basketball, T-ball, baseball and softball,” Kelly said. “Baseball and softball are huge sports out there and something that is different from our other locations. … Colton grew up in sports and has good knowledge of it.

“He has been helping in sports since he started at the club, and he has a really strong work ethic. We think he is going to work out well.”

Hooper graduated from Jessieville High School in 2015, and Kelly said that by being from the area, Hooper has a lot of connections that are helpful in a small rural area.

“[One advantage is] just having the opportunity to connect with everybody because it is a great community to be a part of,” Hooper said. “I enjoy being a part of Jessieville and Fountain Lake. Everybody is friendly and down-home here. You also really get to connect with the kids.

“You get to hear their stories and their background and where they came from. You can relate to a lot of their stories, and it makes it more of a personal-type thing, more than just a job.”

Hooper worked part time for the Cedar Mountain Club as a youth-development professional, but he also worked in the mornings for golf courses in Hot Springs Village.

He left the club and began working at Hot Springs Langston Magnet School and its after-school program through the YMCA. Hooper said he did that for about two years and took a break to sell cars in Hot Springs before returning to the club full time this summer.

“I missed it, and this was a lot better,” he said. “It is a lot less stressful than what I was doing and more beneficial. When this opportunity became available, they knew how I worked and thought I would be a good fit for the program.

“They gave me an opportunity.”

Hooper replaces former athletic director Jamie Miller. Hooper said that even while he was working at the car dealership and at Langston, he still volunteered with the Boys & Girls Club.

“Once I became a part of the club, I knew it was something I wanted to stay with,” he said. “The Boys & Girls Club is a great organization. Everybody I know, their No. 1 focus is the kids.

“They truly put their focus toward the children over anything, and that is a cool thing to see. And of course, when you get around that, you want to stay.”

“Familywise, he had some struggles, but he did a good job of putting that aside and keeping direction in his life,” Phillips said of Hooper. “He had a vision of where he wanted to go and allowed people in his life, such as coaches and teachers, in assisting him in getting there.

“Just like all young men, he didn’t know the exact direction that he wanted to go, but at the same time, he felt like if he was given an opportunity, he would make the most of it.

“I’m tickled to hear that he got that opportunity.”

Phillips said that by working in an environment such as the club, “there is not more of a pressing area of responsibility than that.”

“We can all do very well when things are going well, but how we respond when adversity confronts us is what defines us,” Phillip said. “Colton is a young man, and having an opportunity such as this, finding out a lot about himself as he goes through the process, each time he has the opportunity — it is a learning process that he can grow from.”

The Cedar Mountain Club has been having open sign-ups

for flag football. Hooper said the club has 10 to 15 signed up for football.

Flag football costs $65 per child. He said the cutoff for registration was set for Aug. 30,

but the club is open to possibly extending the deadline to Sept. 9, when the clubs host the evaluations and draft.

“Since this is new to me, we are focused on having a very successful football season; then we will ease into basketball in the winter,” Hooper said.

Kelly said this is the second year for flag football, and the club had 80 players last year.

“It doesn’t sound like a lot, but it is in that community, especially when the district offers tackle football in third grade,” Kelly said.

Hooper said his goals are to help build the program and “put it on the map and let people know all the sports that we have.”

“We would love to have a bigger building here, but right now, my main goal is to just help build the sports program to where we don’t have to reach for numbers.”

He said that right now, he is just trying to get communication with everybody within the schools, as well as the parents, and let them know what the club is doing, what it is about and what it is trying to do.

“Most of the kids who are going to be a part of the sports programs, I have relationships with through the after-school program, so that’s made it easier, also,” Hooper said. “Because I already know most of the kids, they already have that respect and know who I am.”

Hooper said some of these kids he has been around for several years, so the transition has been pretty easy, with the only thing changing is bringing athletics into it.

“Being a part of athletics, in general, that’s my personality — that and being outside,” Hooper said. “I am able to combine the kids program and athletics, which is awesome and a huge plus.”