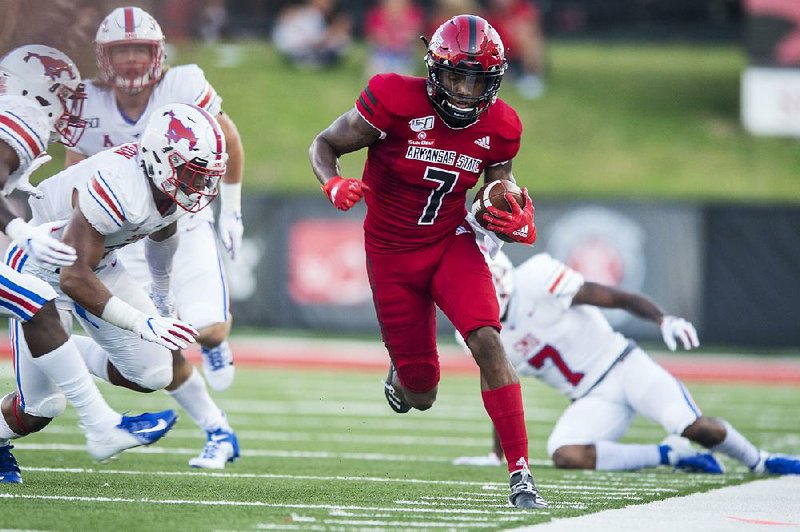 JONESBORO -- The tempo was unrelenting, and the offensive firepower seemed too much to handle.

By the end of the night, the Red Wolves' defense looked gassed.

SMU and Coach Sonny Dykes' high-powered, air-raid offense rolled into Centennial Bank Stadium on Saturday night and put on a show in a 37-30 victory over Arkansas State University, dropping the Red Wolves to 0-1 in interim coach David Duggan's debut.

Despite a prolific connection between ASU junior quarterback Logan Bonner and senior wide receiver Omar Bayless -- the duo connected on four touchdowns -- SMU's offense outdueled the Red Wolves by racking up 508 yards of offense and claiming 35:14 of possession time.

"We were worn down a little bit," Duggan said. "They kept us on the field, and it's difficult to get the guys off the field against tempo football teams."

"Our guys got worn down, and that's on me. I got to do a better job of trying to prepare them and try to get them off the field and keep our guys fresher."

SMU quarterback Shane Buechele, making his Mustangs' debut after transferring from the University of Texas, threw for 360 yards on 30-of-49 passing. Xavier Jones rushed for three touchdowns, and Reggie Roberson caught 11 passes for 180 yards for SMU.

Trailing 37-30 with 2:27 remaining, ASU still had a chance to tie the game on the final possession. Bonner, who made his first start, marched the Red Wolves to SMU's 23 with seven seconds left. A shot at the end zone fell incomplete, then on the next and final play, Bonner scrambled around before being hit and fumbling, ending ASU's hopes.

"Every kid's dream," Bonner said of the final drive. "I loved it. I told the guys it's gonna be a great story. We just didn't get it done."

After Buechele gifted the Red Wolves an interception on the opening series of the game, which was returned 51 yards inside SMU's 10 by senior nickel back Darreon Jackson, Bonner and Bayless struck first with a 7-yard touchdown hookup on the ensuing play to put the Red Wolves up 7-0.

For the rest of the first half, ASU's offense stagnated. The Red Wolves' only other score came on a safety early in the second quarter.

Senior slot receiver Kirk Merritt was knocked out of the game on the Red Wolves' second series, leaving ASU without two of its top three wideouts (senior Dahu Green suited up but did not play with a nagging knee injury).

Bonner committed multiple mistakes in the first half. On the first play of the second quarter, he overthrew Merritt's backup, junior Brandon Bowling, who was streaking down the seam wide open and would have walked into the end zone. It was one of a few deep balls Bonner missed Saturday.

Later in the quarter, Bonner lost grip of the ball while trying to make a pass, and it was intercepted in midair by SMU nose tackle Terrance Newman. That led to a 29-yard field goal by SMU, which pushed its edge to 13-9. The Mustangs tacked on a 25-yard field goal to take a 16-9 lead at halftime.

After the break, a wild third quarter ensued.

Bonner and Bayless connected on touchdown passes on back-to-back drives -- the first from 8 yards and the second from 29 yards -- to start the second half, giving the Red Wolves a 23-16 lead with 7:36 left in the third quarter.

SMU receiver CJ Sanders took back the ensuing kickoff for a 98-yard touchdown to make the game 23-22 in ASU's favor after SMU missed the extra point.

Later in the quarter, another special-teams gaffe cost the Red Wolves.

Senior safety B.J. Edmonds coughed up the ball near midfield on a punt return, which led to SMU driving down the field in nine plays and punching in a 1-yard touchdown run by Jones. The Mustangs then converted a two-point conversion off of a wide receiver reverse pass to take a 30-23 lead with 44 seconds left in the third quarter.

In the fourth quarter, each team added a touchdown. Jones put SMU up 37-23 with a 2-yard rushing touchdown with 9:11 to play. Minutes later, Bonner hit Bayless for a 34-yard touchdown -- their fourth scoring connection of the game -- with 5:59 remaining.

Bayless' four receiving touchdowns tied the school's single-game record, but it mattered none to the senior wideout.

The Red Wolves will have to wait for that first win for at least another week. It's still unclear when Coach Blake Anderson -- who's on leave after the death of his wife, Wendy -- will return to the team.

All the Red Wolves can do is continue forward.

"I really hurt for our team. They've been through a lot of adversity," Duggan said. "I wish that I could have done a better job getting a win for them." 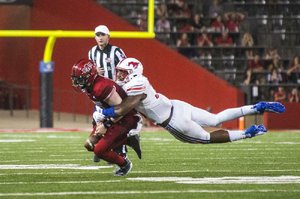 Photo by Jeff Gammons
Arkansas State quarterback Logan Bonner was sacked by SMU’s Delontae Scott on the game’s final play Saturday as the Red Wolves fell to the Mustangs 37-30 at Centennial Bank Stadium in Jonesboro.