Wright's famous House lets us in 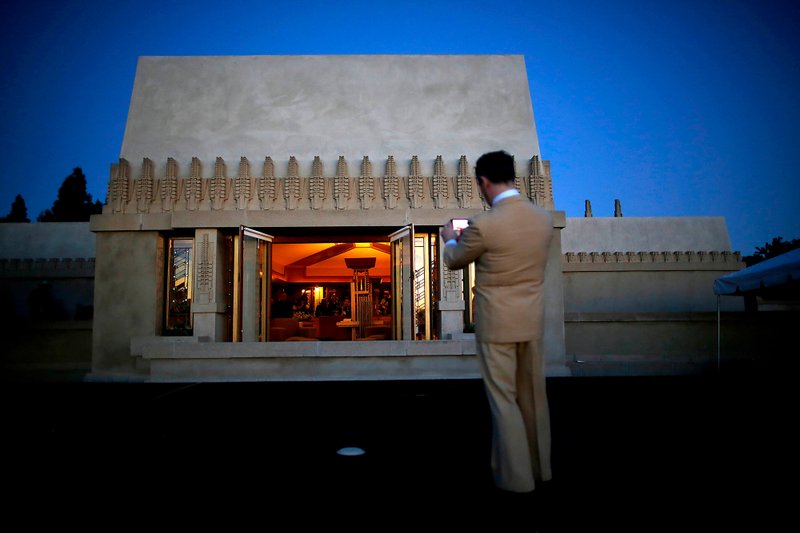 LOS ANGELES — Visitors may finally set foot in the sunken living room, the dining room and the conservatory of Frank Lloyd Wright's famed Hollyhock House in Los Angeles' Barnsdall Park, even though they still have to cover their shoes with paper booties and keep their hands to themselves. And more rooms upstairs and down are expected to open to visitors by Oct. 1, curator Jeffrey Herr said recently.

That means you can walk through the dining room to the kitchen door to admire its mahogany counters and cabinets. Previously, visitors could only get a glimpse from the foyer. You also now have access to the conservatory/breakfast room, which features a wall of windows, and the sunken living room. Visitors can now stand near the massive couch Wright designed to curve around the fireplace whose hearth is decorated with one of his most famous works of art.

It's all because the city is nearing completion of its "Virtual Accessibility Experience," an online virtual tour of the house with a hollyhock motif and a Maya-temple style that Wright built for oil heiress Aline Barnsdall, starting in 1919. The house on July 7 became Los Angeles' first UNESCO World Heritage Site, part of an homage to eight Wright designs, including Fallingwater in Mill Run, Pa., and the Guggenheim Museum in New York.

Barnsdall never lived in the house atop a hill in Hollywood. Instead, she donated it and the surrounding land to the city in 1927. It became Barnsdall Art Park, which also has a nearby art gallery and community art center.

Prior to 2005, visitors had fairly open access to the building. But after a major restoration in 2015, the city's Department of Cultural Affairs clamped down and limited visitors to areas where they could see but not step into the living or dining rooms. The idea was to limit access to areas where people of all abilities could tour the house.

"It was just a matter of being fair," Herr said. "We were very cautious about where access was allowed to the general public until we were able to offer at least a commensurate experience to people with physical challenges."

The online "Virtual Accessibility Experience" is live now, but the project won't be completed until Wi-Fi is installed at Hollyhock House, Herr said, so visitors who can't physically manage the steps can use their smartphones or tablets provided by the city to "tour" the rooms they can't reach.

Herr emphasized, however, that the "Experience" is more than an accessibility tool. The online tour provides a high-resolution look at every room in the house, allowing viewers to zoom in to closely examine details of Wright's architecture and design.

By Oct. 1, the city expects to open up the gallery area on the main floor and the upstairs master bath, child's bedroom and bathroom for self-guided tours between 11 a.m. and 4 p.m. Thursdays through Sundays. The site also offers one-hour guided tours at 11 a.m. and 12:30 p.m. on Tuesdays and Wednesdays. Advance tickets are required ($7), and tours are limited to 10 people. Check the website for information about what areas the tour will include.