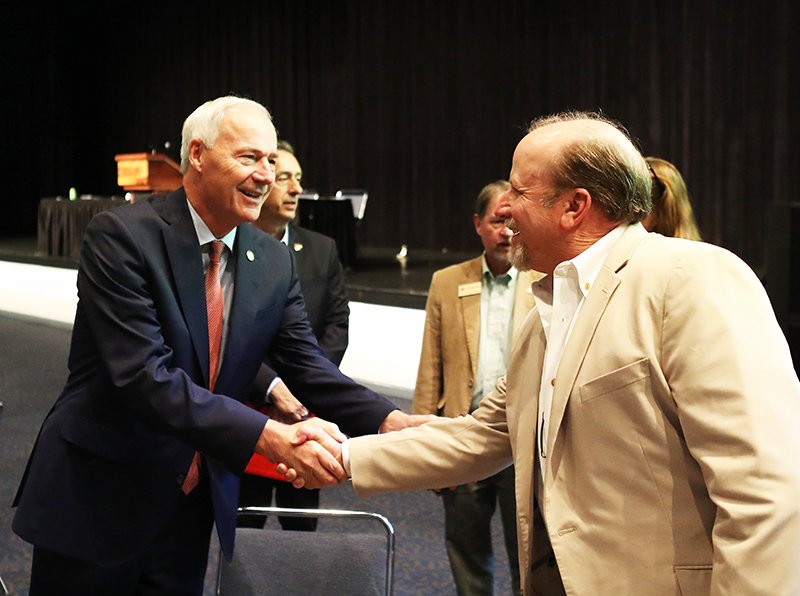 HOT SPRINGS -- Arkansas Gov. Asa Hutchinson spoke last week at the Arkansas Emergency Management Association Conference about the state's Levee Task Force, the "modernized" 911 system and the importance of getting an accurate federal census count for the state.

Hutchinson announced at the conference that he had signed Executive Order 19-12 to establish the Arkansas Complete Count Committee that will assist in counting everyone for the federal census taken every 10 years.

A news release from the governor's office, issued around the time he was speaking in Hot Springs, said the Arkansas Complete Count Committee will consist of 30 volunteer members appointed by the governor from state, municipal, and county government, as well as citizen and private sector representatives.

Hutchinson told the conference that an accurate census is essential in disaster work because the Federal Emergency Management Agency uses the census data to determine the need for federal assistance and Homeland Security bases grant funding upon census information.

The United States Census Bureau estimates that Arkansas has seen an increase of nearly 3.4% in population since the previous decennial census, which occurred on April 1, 2010, the release said. Arkansas surpassed 3 million residents in 2017.

Regarding the Levee Task Force, Hutchinson said he created it because the 92 statewide levees protect homes, businesses and farms from floodwaters, but some are weakening from constant pressure or are no longer high enough.

"It is critical for our state, as part of the Levee Task Force, though we not only convened it, but I put in $10 billion of our reserve allocation fund to help build the levees," he said. "That's probably just a start, but it's an important start. And I know that we've got a lot of work to do."

Hutchinson said the work of the Levee Task Force is "critically important" because it will provide information that policymakers need to improve the current levee systems.

Also, Hutchinson said, the 911 system has been modernized, and more money was invested in it statewide during the latest session of the General Assembly.