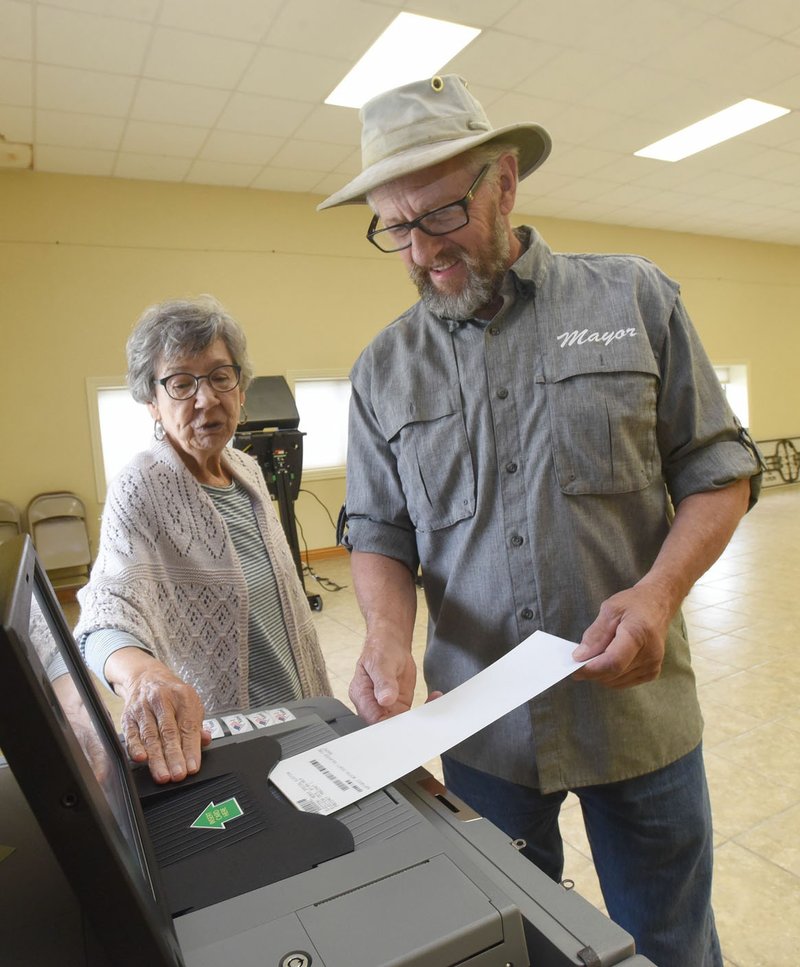 FAYETTEVILLE -- Local election officials say they're struggling to find poll workers as they prepare for the 2020 presidential election year.

"It's about normal going into a big election year," Dennison said. "People have moved or passed away or found full-time jobs where they can't work elections any more."

Jennifer Price, executive director of Washington County's Election Commission, said she's in a similar situation. She's trying to determine how many on her list of 350 workers will be available in 2020.

"In any election year, we typically need anywhere from 100 to 120 new poll workers," Price said. "It's a pretty good struggle."

Washington County has closed some rural polling places when it became impossible to find enough workers, Price said. She gave Hazel Valley and Viney Grove as examples. The poll at Sulphur City was closed after the longtime supervisor became ill and decided not to continue working, she said.

"We're hesitant to close any polling places because we want voters to have access to elections," Price said. "It's certainly not something we look forward to."

Dennison said she hasn't had to close any polls because of staffing levels. Her greatest need is for workers to staff locations in Rogers and Bentonville.

Dennison and Price said they draw workers from a limited pool of retirees, stay-at-home parents and people whose jobs allow them to miss work for elections.

Poll workers are expected to work up to 13 hours on election days, checking voter registration and identification and making sure voters get the correct ballots.

The majority of workers were 61 and older in both counties for elections in 2018, according to reports.

Price said election supervisors are paid $11.30 an hour, and poll workers are paid $10.30 an hour. She has asked for the pay to be raised by $1 per hour for both.

The primary and general elections are the only ones scheduled so far for next year.

Recruiting poll workers is harder than retaining them, Price and Dennison said. They have sought help from civic groups, the political party organizations, schools, the University of Arkansas and Northwest Arkansas Community College.

Many polling places are staffed by longtime poll workers and many supervisors have recruited their workers from friends, family and neighbors, they said.

Barbara Verdery has lived in Fayetteville for 30 years and has worked elections for about 15 years. She's the supervisor at Central United Methodist Church in Fayetteville. Verdery said most of the poll workers at the church have been together since she began.

"We did have one woman who was 90 years old," Verdery said. "She decided it was time to retire last year."

Verdery said the staffing at the church has been pretty constant, but there have been election days when people were unable to work.

"If we're short-handed, the voting is going to go slower. People might have to wait anywhere from 15 minutes to an hour longer depending on when they come to vote. Most people understand. They want to exercise their right to vote and are willing to wait," she said.

Brenda Taylor of Lowell has been an election worker in Benton County for seven years and a supervisor the past four.

What may be a small problem -- say someone showing up to vote who has moved from Washington County to Benton County -- requires a supervisor to take them aside, check their voter registration, then return them to the queue. If someone else needs additional assistance, they may have to wait until a poll worker or supervisor is available.

"It tends to disrupt the flow of voting," Taylor said. "Most people are so nice, and they want to work with us, but tempers can get a little short."

Jimmy Cummings is Cleveland County clerk and serves on the board of the Association of County Clerks. He said the problem of finding and retaining poll workers is recognized across the state.

"Every time we have a meeting and talk elections, we talk about poll workers," Cummings said.

Cummings said in Cleveland County, with a population of about 8,600 and about 4,900 registered voters, he needs 66 poll workers and he has 40 to 45 he counts on.

"I'll have to find the other 20," Cummings said. "We recruit poll workers year-round."

Renee Oelschlaeger, a Republican, is chairwoman of Washington County's Election Commission, serving off and on since 2008. She said the need for poll workers has been a chronic problem.

"If I could find the answer to that, I would probably make $1 million," Oelschlaeger said. "As long as I've been on the Election Commission, that has been a constant. I don't know how to fix that. I wouldn't call it a crisis, but we are mandated to carry out elections, and we can't do it without people."

Max Deitchler, the Democratic Party's representative on the commission, agreed the need for poll workers is a chronic problem. Deitchler said he has focused on outreach efforts and believes that has to continue. He said the outreach effort did score a notable success in advance of the 2018 election.

"We were able to recruit a number of translators for the last election," Deitchler said. "That was the result of talking to other people about our needs. For the most part, that's what our recruiting efforts have been. It's word-of-mouth and friends asking friends."