Big band looms large: It will take more than detours to turn Stardust’s fans away 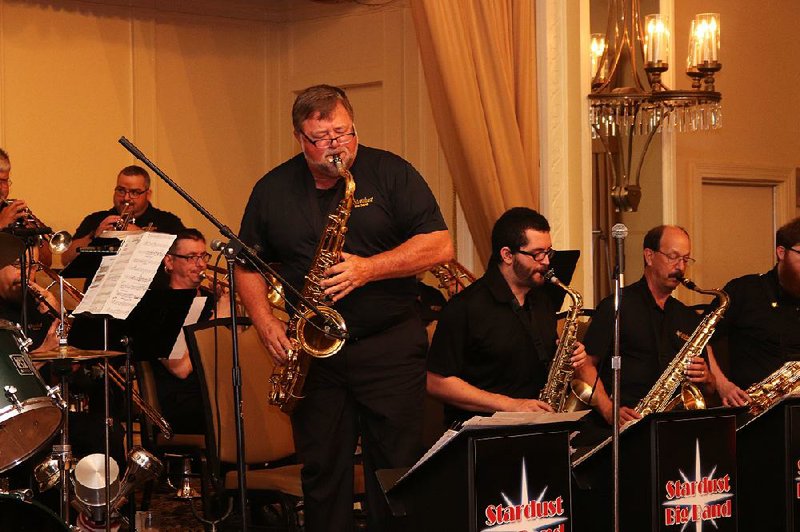 HOT SPRINGS -- A police-involved incident in Hot Springs has resulted in much of downtown Central Avenue being closed off. As a result, some attendees are late for the July 28 appearance of the Stardust Big Band at the historic Arlington Resort Hotel & Spa.

But the band's popularity suggests that it would take much more than an inconvenient detour to make this crowd skip this performance.

The Stardust Big Band -- a 14-piece ensemble that has performed here during once-a-month "tea dances" since 1996, as well as every New Year's Eve since 1992 -- specializes in music its ballroom-dancing fans can't easily find on the live music scene, like jazz and swing compositions dreamed up by the likes of Benny Goodman, Duke Ellington and Glenn Miller.

Big band "generally refers to the swing era starting around 1935," according to the website Acousticmusic.org. "It had evolved naturally from the blues and jazz of New Orleans, Chicago and Kansas City ... In the 1920s the music of jazz began to evolve to bigger band formats combining elements of ragtime, black spirituals, blues, and European music."

The website names Ellington, Ben Pollack, Don Redman and Fletcher Henderson as big-band pioneers who nurtured up-and-comers such as Goodman and Miller.

In the 21st century, Stardust continues its original mission to keep this music alive.

Bill Halbrook, who leads as well as plays drums for the band, notes that big bands made a resurgence at one point with Big Bad Voodoo Daddy and the Brian Setzer Orchestra. "And then they went away again. But we've stuck to it ... Hopefully, it's coming back again."

But Stardust doesn't limit itself to jazz and swing. It's also known for taking songs made famous by Sam Cooke, the Beach Boys or Earth, Wind & Fire and having everyone tapping their feet, if not up on the floor.

It's early in the nearly three-hour performance in the hotel's second-floor ballroom. The musicians are seated in rows -- those in front behind short, podium-shaped music stands bearing the band's name; those in subsequent rows, behind regular metal stands. They deftly accompany auburn-haired vocalist Shirley Chauvin when she launches into "How Sweet It Is (To Be Loved by You)." Chauvin is one of two female band members, the other being keyboardist Kristen La Madrid.

Eager dancers hit the floor. One couple is dressed as if they're competing on Dancing With the Stars, with a nod to Ginger Rogers and Fred Astaire. But most sport a mix of business, casual and cocktail attire.

The saxophones, trumpets and trombones blend sweetly. Even on this soulful ditty by Cooke, the band evokes silver-screen movies with Rogers and Astaire. Chauvin croons as couples glide across the floor, most obviously well versed in ballroom dance. They applaud as the songs come to a close.

"We appreciate y'all being here ... especially on such a day as today with all the fun we've had getting here," quips Halbrook. Then he announces the next song, "a nice little ballad" called "Skylark," again with Chauvin on vocals.

The band is unusual for what it does and how long it has done it. It was organized in 1982 by area high-school band directors and former professional musicians. Several years later, Stardust came under the directorship of Harvey Haley, a trombonist and a secondary public school band director, and it flourished. The membership has changed over the years, "but the dedication of the musicians is unwavering," Chauvin says. The only time the band has ever missed its monthly gig at the Arlington was during a long-ago ice storm, she adds.

The dedication of the band's aficionados, who hail from throughout the state and beyond, is also unwavering. These fans include Ryan Murry and her husband, Monty, of Texarkana. The couple have been coming to the monthly dances for the past five or six years.

"When Monty and I first got married ... we always wanted to dance, but we were too nervous," Ryan Murry says. "We took a local ballroom dance class in Texarkana and then discovered the bands up here, especially this one. And so we started coming on New Year's Eve.

"This is the one venue ... that you can find this sort of music. It's a step back in time. We've met people from all over the country who come to this venue because it's getting harder and harder to find excellent ballroom music and swing. Luckily, Bill and the band here, they ... do a wonderful job."

She also loves the friendly atmosphere at the dances. "Coming from out of town, that's really nice ... they just welcome you with open arms."

James and Stephanie Syler, also from Texarkana, are longtime fans of music from the 1940s. "When we started learning to ballroom dance, we were excited" to find out about the Stardust Big Band, Stephanie Syler says. The couple look forward to heading to Hot Springs each month.

"If you want big band, this is it," James Syler says.

In addition to the monthly and New Year's Eve gigs, Stardust performs for weddings, conventions and special occasions. These days, not all members are band directors -- "We have a varied skill-set of guys and gals," Chauvin says. She cites the auto mechanic and school principal who help make up the trombone section, the U.S. Department of Veterans Affairs executive who plays the trumpet, the former rock 'n' roll drummer in the rhythm section and the lawyer in the saxophone section.

"As usual, we try to hit you with a few new pieces every month -- and this is one of them," he says. "It's a nice little waltz that most of you will recognize. It's called 'Are You Lonesome Tonight.'"

The hits, and the music-genre excursions, keep coming. Trumpeter Guido Ritchie performs a solo during "As Time Goes By," after which Halbrook announces they're going to play "a little Beach Boys here" before the band launches into "Kokomo." After that, it's on to "Leap Frog," the brisk, percussion-rich number made famous by bandleader Les Brown and the first jitterbug song of the evening.

Howard Glatstein and Shirley Windland, ballroom dancers from Memphis, are on the floor for just about every song. The couple learned about the Stardust Big Band from a publication in their town that heralds coming dance events.

"We said, 'Let's go try it,'" Glatstein says. "And then, we just wanted to get away from Memphis. You just don't want to dance all the time [with the] same people, same places. So we said, 'Well, let's get a little variety in our life.' ... We've been coming back off and on for maybe three years."

Which is not surprising, as "they play the music we like," Glatstein says. "They do a good job of emulating a big band from the '30s and '40s."

Rick and Sarah Pinedo of Cabot say the band was instrumental in their own interest in ballroom dancing, which they've done for 13 years now. "We never would have come out here to the Arlington if they weren't here," Sarah Pinedo says.

"They don't do this for the money," says Halbrook, of Caddo Valley, a career musician who's been with Stardust about a decade and a half. "We don't get a lot out of this, and we rehearse basically every week on top of that. It's the love for this kind of music and the 'want to play.'"

The lawyer, Brian Trubitt of Bismarck, backs that up. The attorney with the Taylor King Law Firm in Arkadelphia has been with Stardust about seven years.

"What I like about this band is all these guys are basically better than me, and I get to play with the big boys and sound really good," Trubitt says. "It's rather an ego boost to be able to keep up with guys like this. It's amazing that a band like this can exist at all."

Frank Janaskie, principal of Fountain Lake Middle School in Hot Springs as well as a former band director, has been playing bass trombone for Stardust about 30 years. He sticks with the band because "number one, it's got a great bunch of people playing in it, and number two, I love to play."

Haley was his high school band director, he says. "I ended up playing second trombone as a senior in high school."

Janaskie loves to see dancers coming from afar. "It's really great to see them not let swing music die out."

Another Stardust long-timer, Ron McHone of Sunshine, is the band director at Lake Hamilton Middle School. He played with Stardust in the 1980s, took a sabbatical "and did some rock 'n' roll stuff." When he moved back to Hot Springs three years ago, he rejoined the band.

One of the band's youngsters, 33-year-old Sean LaFollette of Hot Springs, has been with Stardust five or so years.

"Playing saxophone, you gotta kind of ... play everything," he says, "so when someone calls you and says, 'You want to play some big-band music?' you answer the call. I wasn't really super into it before this." But, LaFollette adds, it's grown on him.

Chauvin and the band launch into "Summertime." The seductive trumpet dominates in an instrumental interlude during this ultra-jazzy number. But again, the whole horn section would make a grown man cry. The band even plays the strip-tease classic song, simply known as "Stripper," and does a good job there, too.

During the second set, Chauvin introduces Quynh Chau Stone and her husband, Wes, former Arkansas residents now living in Plano, Texas. It's the Stones' first time at the hotel in 25 years. They are, in fact, celebrating their 25th anniversary. Chauvin has them stand up and announces that the band will play "I'll Take Romance" for them.

"It's jitterbug time again," Halbrook says in introducing the Stray Cats' 1981 song "Rock This Town." The horns whine in glorious unison as the couples get up and re-create a mid-20th-century vibe. After that comes Earth Wind and Fire's R&B hit "Fantasy," which the band covers skillfully and magnificently, even down to a triumphant-sounding end. The last song: "The Lady is a Tramp," sung by Chauvin.

And, as the evening comes to an end, it's Chauvin who gives the last words.

"Wow. Thank you all so very much. See ya next month."

The next appearance of the Stardust Big Band at the Arlington Hotel Ballroom, 239 Central Ave. in Hot Springs, will be Sept. 22. For more information, visit the band's website, stardustband.net. 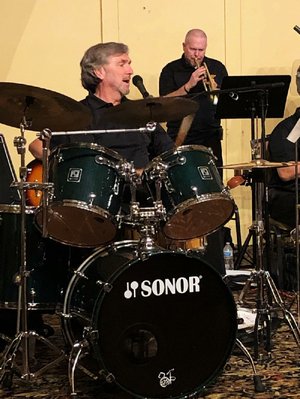 Photo by Arkansas Democrat-Gazette/HELAINE R. WILLIAMS
Bill Halbrook of Caddo Valley, who leads the Stardust Big Band, prepares to play drums at the band’s monthly performance. In addition to jazz and swing, Stardust performs other genres for weddings, conventions and special occasions. 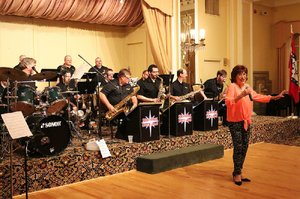 Photo by Arkansas Democrat-Gazette/HELAINE R. WILLIAMS
Shirley Chauvin of Hot Springs sings to the accompaniment of the Stardust Big Band, which performs at the Arlington one Sunday each month. 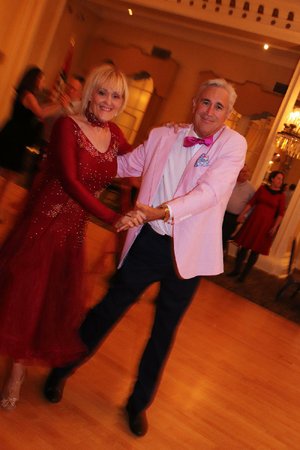 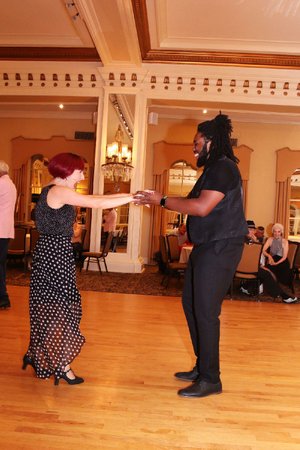 Photo by Arkansas Democrat-Gazette/HELAINE R. WILLIAMS
Roxy Kirchhoff and Donnie Brown, both of Hot Springs, dance at the monthly performance of the Stardust Big Band.