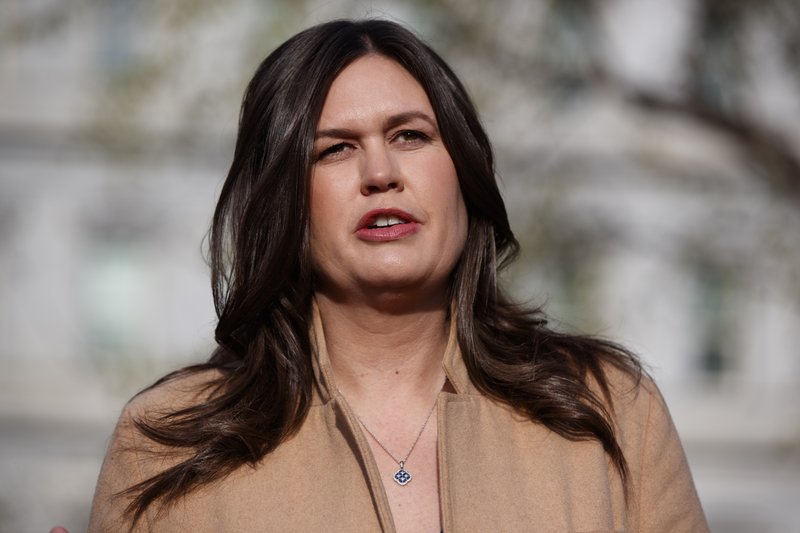 WASHINGTON -- There are better uses for money than donating it to the Draft Sarah Huckabee Sanders for Arkansas Political Action Committee, her father, Mike Huckabee, maintained Monday.

The priority, for now, is the 2020 election cycle, not 2022, he told the Arkansas Democrat-Gazette via text message.

"Sarah's focus and the one she hopes donors will make a priority is to re-elect President [Donald] Trump and elect Republicans at every level, but especially at the House and Senate level," he said. "Sarah is not a candidate for any office right now. Her singular goal is to help the President and other Republicans in the 2020 cycle. Any contributions made to an unauthorized PAC would be better made to 2020 races."

Huckabee said he can't vouch for the new PAC, which is urging his daughter to run for governor three years from now.

"[Neither] Sarah nor anyone connected to her has ANYTHING to do with it," the former Arkansas governor wrote. "The person who launched it is unknown to everyone in Sarah's family, her political orbit, or her circle of friends."

Created in June, the PAC had no Arkansans on its board until late last week. Its newly recruited chairman, Jarrad Shelton of Nashville, has no previous political campaign experience.

The group's treasurer, Patrick Krason of Charleston, W.Va., has overseen a string of other PACs, including several centered on marijuana legalization. He typically receives "10 to 12% of net funds raised," he told the Arkansas Democrat-Gazette.

Asked about Huckabee's advice to potential donors, Shelton said, "I don't have anything to do with the money part of it. I'm just out trying to help Sarah win."

In May, Krason was convicted in absentia of driving on a suspended or revoked license and of failing to appear in court, according to Virginia court records.

The license was suspended due to an unpaid ticket, he told the Democrat-Gazette.

Krason was fined and is in the process of paying what he owes, he added.

Initially, the PAC's bank was in California, then in West Virginia. Last week, First State Bank of Nashville was added to the list and then removed, replaced by Red River Credit Union, according to Federal Election Commission filings.

Thus far, the pro-Sanders PAC has collected less than $10,000, Krason said, though he predicted the figure would rise.

"We've only sent fundraising messages two times this week," he said in an interview on Friday.

Krason has never been to Arkansas and doesn't know the Huckabees, he told the Democrat-Gazette. But he was paying attention on June 13, the day Sanders' resignation as press secretary became public.

In a tweet that afternoon, Trump praised "wonderful Sarah Huckabee Sanders" for her service, adding, "I hope she decides to run for Governor of Arkansas -- she would be fantastic."

That same day, the domain name DraftSarahForArkansas.com was snapped up.

After forming the PAC and securing the domain name, Krason focused on finding an Arkansan to lead the group, turning to social media for help.

"Who do I know in Arkansas?" he posted on his Facebook page Aug. 1.

The first person Krason approached turned the position down.

"It took us two months to find the right person in Arkansas...before we even really launched it," he said.

Now, the group is up and running.

Its website promotes the PAC, highlights one of Trump's June 13 tweets and solicits donations.

Thursday, it switched its address from Washington to Nashville, according to FEC filings.

"Please help financially support our outreach work so we can let Sarah know Arkansas and America are behind her 100%!" the webpage states. "Please note, US Individuals and Green Card Holders and [sic] well as US Businesses may donate unlimited amounts to the Draft Sarah Huckabee Sanders For Arkansas PAC. Please be generous and donate now!"

Huckabee, meanwhile, portrayed the effort as unsanctioned and premature.

"While it's always nice to know people support Sarah and appreciate her service, an out of state PAC soliciting funds for a campaign for her when she has barely had time to move home and get her kids in school is not something any of her family and friends are part of in any way," he said.

Asked whether he would like to see Sanders run for governor, Huckabee said, "I would support all my children in whatever they did. Only she can determine if that's something she will pursue someday."