Walmart plans to curb its sales of ammunition; customers asked to refrain from openly carrying guns 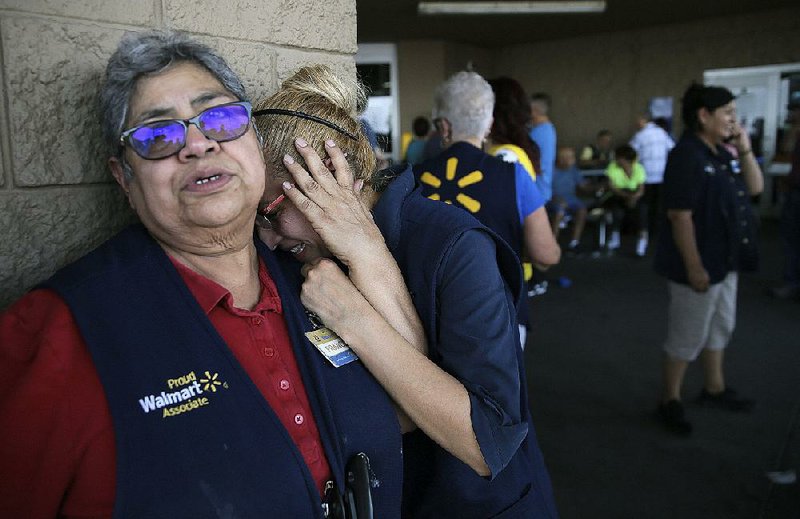 Walmart employees console each other Aug. 3 at a Walmart store in El Paso, Texas, in the aftermath of the shooting there that killed 22 people.

Walmart Inc. said Tuesday that it has revised its policies on sales of ammunition and the open carrying of firearms in the wake of two recent deadly shootings in its stores.

The retailer's remaining assortment of firearms and ammunition "will be even more focused on the needs of hunting and sport-shooting enthusiasts," Doug McMillon, Walmart's president and chief executive officer, said in a letter to employees Tuesday. These items will include "long-barrel" deer rifles and shotguns, "much of the ammunition they require," plus hunting and sporting accessories and apparel.

While responding to the needs of employees, victims' families and law enforcement authorities since the shootings in Texas and Mississippi, McMillon said, "We've also been listening to a lot of people inside and outside our company as we think about the role we can play in helping to make the country safer.

"It's clear to us that the status quo is unacceptable," he said.

In the letter, McMillon said Walmart "will discontinue sales of short-barrel rifle ammunition such as the .223-caliber and 5.56-caliber that, while commonly used in some hunting rifles, can also be used in large capacity clips on military-style weapons."

Other companies have responded to public pressure to restrict gun sales. Dick's Sporting Goods announced in March that it would stop selling firearms and ammunition at 125 of its 700-plus locations. Kroger joined Walmart on Tuesday in asking customers not to openly carry their guns in stores.

McMillon acknowledged that Walmart's changes will inconvenience some customers, adding, "We hope they will understand." He said the company expects its market share of ammunition to drop over time from about 20% to a range of 6% to 9%.

Walmart sells firearms at about half of its 4,700-plus U.S. stores, with many more selling ammunition.

McMillon's letter also addressed numerous instances since the Aug. 3 store shooting in El Paso, Texas, of people around the country carrying firearms into Walmart stores to make statements or test the retailer's response. The letter also mentions customers lawfully taking their weapons into stores and unintentionally alarming shoppers and employees.

To avoid such incidents, McMillon said, "We are respectfully requesting that customers no longer openly carry firearms into our stores or Sam's Clubs in states where 'open carry' is permitted -- unless they are authorized law enforcement officers." Walmart's policy allowing shoppers with concealed-carry permits to carry guns in stores remains unchanged, he said.

McMillon closed his letter with a call for expanded background checks and measures allowing the removal of weapons from people determined to pose an immediate threat to themselves or others, known as "red-flag" laws. He said he was writing to the White House and congressional leaders to urge action on such measures.

In the weeks since the shootings, Walmart has faced calls, both inside and outside the company, from activists for a ban on all firearms sales. Employee Thomas Marshall organized a walkout days after the El Paso shooting, and he started a petition on Change.org that asked the retailer to ban all guns from company property and to stop giving money through its political action committee to politicians endorsed by the National Rifle Association.

"It is shameful to see Walmart succumb to the pressure of the anti-gun elites. Lines at Walmart will soon be replaced by lines at other retailers who are more supportive of America's fundamental freedoms," it said.

Michael Bane of Colorado, a weapons expert and television producer for the Outdoor Channel, said in a phone interview that he is unconcerned about Walmart's policy changes.

"It's absolutely Walmart's right to do whatever they want, so cool," Bane said. By the same token, he added, consumers have the right to spend their money -- or not -- wherever they choose. And there are many places besides Walmart to buy ammunition.

"In most of the country, you can buy ammunition at the hardware store," Bane said. "In some places in Texas, you can buy it at ... convenience stores."

As for making any dent in mass-shooting casualties, though, "it's of no consequence whatsoever," he said.

Information for this article was contributed by Anne D'Innocenzio of The Associated Press.