Bowling strikes for ASU in relief 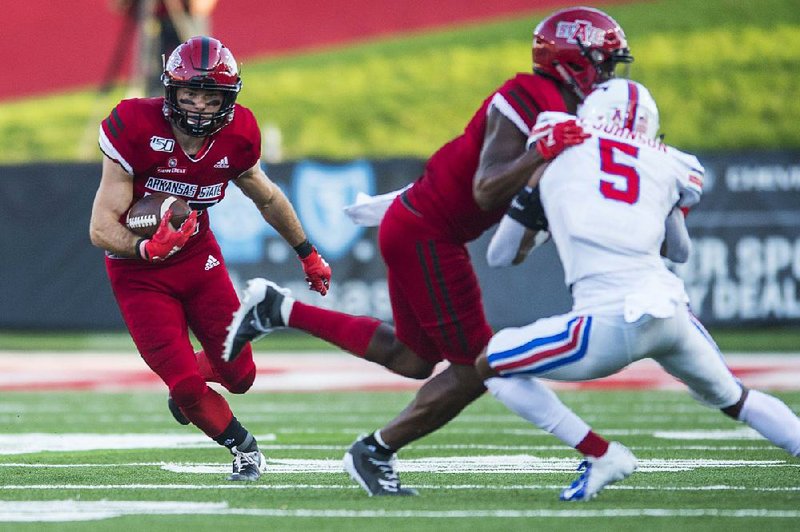 Junior Brandon Bowling (with ball) had a game-high 12 receptions for 92 yards Saturday against SMU in Arkansas State’s 37-30 loss to the Mustangs. ( Jeff Gammons)

Merritt took a big hit over the middle while trying to catch a pass in the first quarter, and he was on the ground for a while before he slowly got up and walked to the Red Wolves' sideline under his own power. SMU safety Trevor Denbow was called for targeting on the play and ejected from the game.

But Merritt's absence didn't derail the Red Wolves' offense Saturday night, nor was there a significant dropoff in production from the slot receiver position.

Give credit to junior Brandon Bowling, Merritt's backup, for that.

Bowling caught a game-high 12 passes for 92 yards in the defeat, both career highs. Prior to Saturday, Bowling had registered 15 receptions for 108 yards in his entire Red Wolves career, all coming last season.

"Our team really wasn't fazed by [Merritt's injury]," ASU offensive coordinator Keith Heckendorf said Monday. "We kind of have that next-guy-up mentality for [when] a guy gets hurt. Control the things you can, don't worry about the things you can't. Brandon Bowling did a great job stepping up in Kirk's spot."

Bowling spent his first two years at ASU mostly on the scout team, and he briefly appeared in two games as a redshirt freshman in 2017. Last year, Bowling earned a chance for more playing time, but his season was cut short after six games because of a torn MCL.

"Coming up on scout team and just trying to make my way onto the field, last year, I sort of proved myself a little bit," Bowling said. "But tearing my MCL, that hurt. And then now, trying to come back from that, and then having the game that I had, it was pretty cool -- and an unfortunate event at the same time, too. It sucks to see a teammate go down like that, especially one that I'm pretty close with."

Bowling's big night was overshadowed by that of his counterpart, senior wideout Omar Bayless, who tied ASU's single-game record with four touchdown catches and tallied 10 receptions for 132 yards.

Bowling's performance was still critical, and for the time being it may have helped quell concerns about the Red Wolves' slot position and offense as a whole.

But Bowling knows how big Merritt is to ASU (0-1) moving forward.

"[Kirk's] freaking really fast. He's got next-level ability," Bowling said. "I try to learn from him as much as I can, and I even think that he learned from me as well. I think we both bring different things to the table, so I think that's why our offense is gonna be really good this year."

Merritt was sidelined and wearing a noncontact jersey during Wednesday's practice.

During his Monday news conference, ASU interim coach David Duggan wouldn't disclose Merritt's injury or whether the senior receiver was in concussion protocol.

After Wednesday's practice, Duggan reiterated that Merritt is still day to day along with fellow senior receiver Dahu Green, who's been nursing a knee injury since fall camp. Green did not play against SMU, but he was a participant in Wednesday's practice and worked with the second-team offense. Junior Jonathan Adams Jr., who's listed as Green's backup on the depth chart and caught eight passes for 84 yards against SMU, ran with the first team.

Duggan said both Merritt and Green will "pretty much" be game-time decisions against UNLV (1-0) on Saturday night. The game kicks off in Las Vegas at 9 p.m. Central and will be streamed on Facebook.

"Hopefully we're gonna get Kirk back, and that'll help a lot," Bowling said. "Because then, we'll be able to split some reps, have fresh guys on the field.

"On Saturday, it was just me, Omar and J-Adams. So if we were able to get Kirk back and then get Dahu back, that will help a lot spreading it around and having so many weapons."