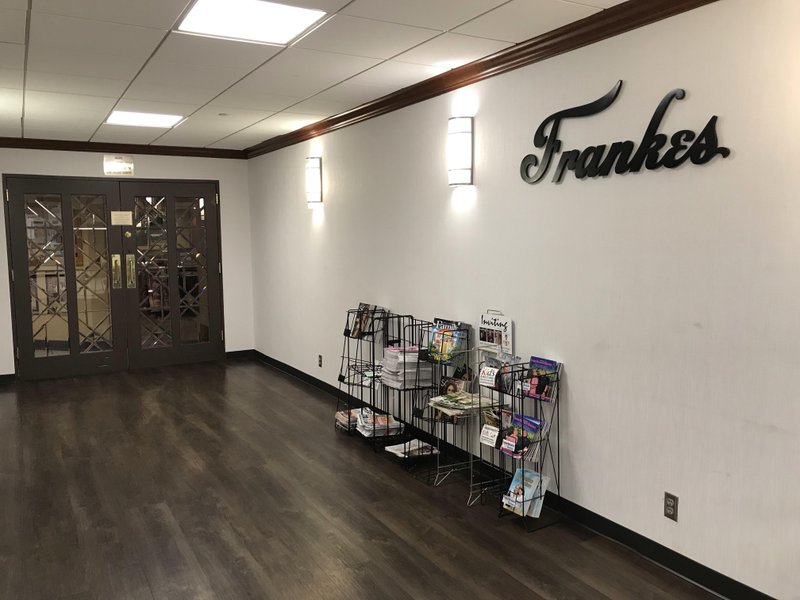 Franke’s Cafeteria, which opened a century ago in downtown Little Rock, has closed its location in the Regions Center Building, 400 W. Capitol Ave.

Bob Perell, manager of the Franke’s location at 11121 N. Rodney Parham Road in west Little Rock, confirmed the unexpected closure of the downtown location Thursday morning. “It’s an ownership decision — that’s all I can say,” he said.

Perell said for the time being, the subsidiary Sack It sandwich shop will remain open for breakfast and lunch.

The bank building’s property management office said it sent out a note to building tenants informing them of the unexpected closure of the long-time tenant and a that a redevelopment plan for the space has been in progress for some time.

The phone number, (501) 372-1919, had not yet been disconnected as of Thursday morning, but nobody answered it during business hours. Business owner Abraham Delgado did not respond by deadline to a message seeking comment.

Franke’s opened a Conway branch May 23 at 1101 Fendley Drive, Conway, in the former Dixie Cafe building. That location and the one on Rodney Parham Road remain open.

Just before noon Thursday, Doris Rancifer and Angeria Graves sat outside Franke’s at a plastic table. They work in the building and said they came to the restaurant for lunch several times a week. When they saw the sign announcing the restaurant was closed Thursday, they sat down outside, unsure where else they would go.

“It had great food and nice people,” Rancifer said. “I’m trying to figure out why it closed because it always had a decent number of people in here.”

Next door at Morrison’s Capitol Barber Shop, owner Bill Dickinson reclined in the waiting room, chatting with patrons and others about the restaurant’s closing.

Dickinson said he ate at Franke’s almost every day since it opened in that location in 1989, and before that, he ate at a previous downtown location.

“The only time I eat vegetables is over there,” he joked.

He said he remembered when the restaurant next door opened and it regularly had a line out the door.

He guessed the restaurant probably closed because it needs to re-brand into something more modern. Menu items like fried chicken with squash or baked fish with okra were maybe designed for a different generation.

Rancifer and Graves said the restaurant had mostly middle-aged and older customers, but they figured that was who the restaurant should have expected.

For lunch, the pair debated going to Sack It next door they’d been to many times as well, but the line was long — a side effect, Rancifer assumed, of Franke’s being closed.

As the customers filtered through Sack It, nearly every one asked the cashier about what had happened to the restaurant next door.

Leasing agent John Martin of Newmark Moses Tucker Partners, representing the building’s owners, says the closure, while sudden, was not entirely unexpected. He said conversations with Franke's management over "refreshing" the 9,000-square-foot cafeteria space had been ongoing in conjunction with a substantial renovation of first- and second-floor public and retail spaces, including Dickinson's barber shop.

He said he has not yet seen a formal notice from Franke's but received an informal notice Wednesday that they would close. He would not comment on the terms or length of the lease, except to note that provisions in the lease prevented the building management from pursuing certain food and beverage options.

Franke's retains the option of renegotiating the terms of their occupancy, but if it comes to their departing the building, Martin said, there are options under consideration for what to do with the space that would benefit "the building, its tenants and downtown Little Rock."

That could include a multi-vendor food hall and operations that would open earlier and/or stay open later than the bank or the rest of the building, among them a business that would be licensed to sell beer and/or cocktails. The cafeteria space currently has separate entrances that don't require an entrance into the building proper.

Martin said there's been a push on the part of building management to increase amenities for tenants as building occupancy has increased from 67% to 93% over the past three years. That has included "pop-up" retail outlets.

Franke’s has been marking its centenary this year. C.A. Franke founded it as a doughnut shop on West Capitol Avenue in 1919, according to the Franke’s website, frankescafeteria.com/history, and in 1922 built a large bakery at 111 W. Third St. He opened the original Franke’s Cafeteria In 1924 at 115 W. Capitol at Louisiana Street, where the customers included shoppers at the major downtown department stores. A separate dining room subsequently opened around the corner at 511 Louisiana, sharing the same kitchen.

The location in what was originally the new First National Bank building, subsequently the First Commercial and now Regions, at 400 W. Capitol opened in 1989. The Rodney Parham cafeteria, which continues to operate and serve the cafeteria’s popular eggplant casserole, took over what had been Wyatt’s Cafeteria in the fall of 1994.

Franke’s son, William J. Franke, began running the operation in 1967. William Keliher “Bill” Franke, his grandson, took over in 1983. His wife, Carolyn, and their daughter, Christen Franke, also worked in the business. Christen, who became the manager after she got out of college, died in December 2016 at the age of 37; Bill, her father, died three months later in March 2017 at age 67. Carolyn Franke sold both locations in August 2018 to Delgado, who had been Franke’s general manager.