In NW, trainee program in works 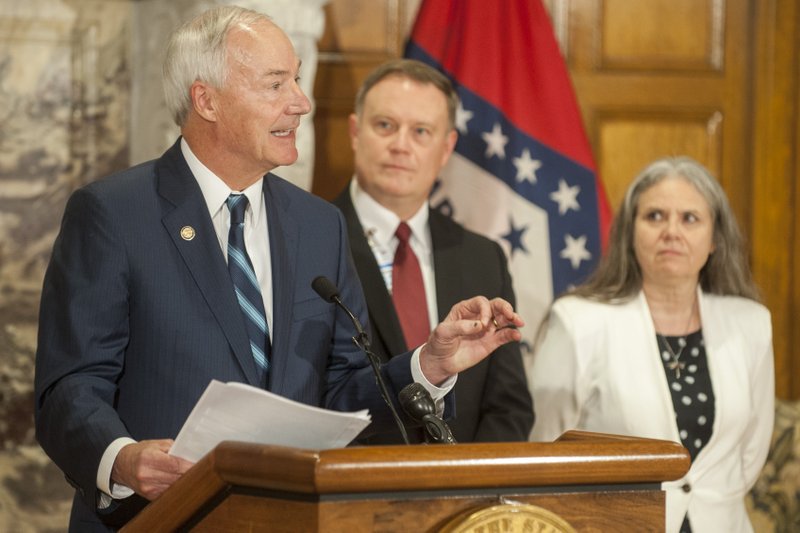 SPRINGDALE -- To help grow the number of qualified tech industry workers in Northwest Arkansas, state and business leaders are working to create more than 200 apprenticeships for those interested in careers in technology.

The apprenticeship program, led by the Northwest Arkansas Council and the Arkansas Center for Data Sciences, would combine classroom education with on-the-job training for a minimum of one year, with areas of study in cybersecurity, website development and data analytics.

Efforts to increase the region's technology workforce through apprenticeship and accelerator programs come as area employers grapple with a shortage of startup companies and qualified workers.

"We have to be able to expand our workforce in that arena to meet the needs of industry," Gov. Asa Hutchinson said Wednesday in a room filled with business leaders at the Northwest Arkansas Council's office in Springdale.

In addition to the apprenticeship program, companies RevUnit and Startup Junkie announced plans to hold a second Fuel accelerator program next year for startup companies interested in machine learning and artificial intelligence.

"This is exciting for the entire state of Arkansas, because it illustrates that we are accomplishing a strategic plan, that we're carrying out our desire to increase not only businesses that can excel in technology, but we can also supply the existing industry that's here with the talent that's needed," Hutchinson said.

The apprenticeship program led by the council and Arkansas Center for Data Sciences is geared toward high school and university students set to graduate in the spring, as well as adults who want to make a career change. The program pairs entry-level apprentices with businesses, with the end result being a qualified employee, the organizations said. A combination of state and federal grants will pay for the training, excluding certain fees.

"There's a gap between demand and supply, both in terms of capacity and in terms of capability, and fixing it will be a long-term project," said Bill Yoder, executive director of the Arkansas Center for Data Sciences. To counter that, the region's new apprenticeship program is one of the most efficient and cost-effective available in the state, he said.

Apprenticeship applications will be available in October at careersnwa.com. Employers will review the applications and select their own apprentices.

The Fuel accelerator program led by Revunit and Startup Junkie began last year, when eight startup companies took part in 16 weeks of workshops, feedback sessions and training. As part of the process, the startup business leaders had a chance to build relationships with the region's Fortune 500 companies. Some of them even put down roots in Arkansas.

"This is a huge win for us, of course we hope to have similar stories like this for the upcoming year," Hasley said. "This wouldn't be possible without the awesome support that we have."

Fuel 2020 will be a shorter 12-week program focused on artificial intelligence and machine learning, he said. Applications are available and interviews will begin later this year.

More information is available at fuelaccelerator.com.

Business accelerator programs are partially funded with tax dollars. In 2017, the general assembly allocated, at the governor's request, $2 million every two years to be used for accelerator programs, Hutchinson said. About $250,000 was used for each accelerator program that would recruit startup companies across the nation to Arkansas to be mentored, with the goal of landing some companies, he said.

"The accelerator program has exceeded all of our expectations, not just in Northwest Arkansas, but in Little Rock, Conway and other parts of the state," Hutchinson said.

"Let me tell you, if you're not excited about what we are doing in the Northwest Arkansas ... in the area of technology, then you are missing the boat."

CORRECTION: There are no fees for an apprenticeship program led by the Northwest Arkansas Council and the Arkansas Center for Data Sciences. An estimate of fees for the program was incorrectly included in an earlier version of this story.