Miner of platinum turns to Montana 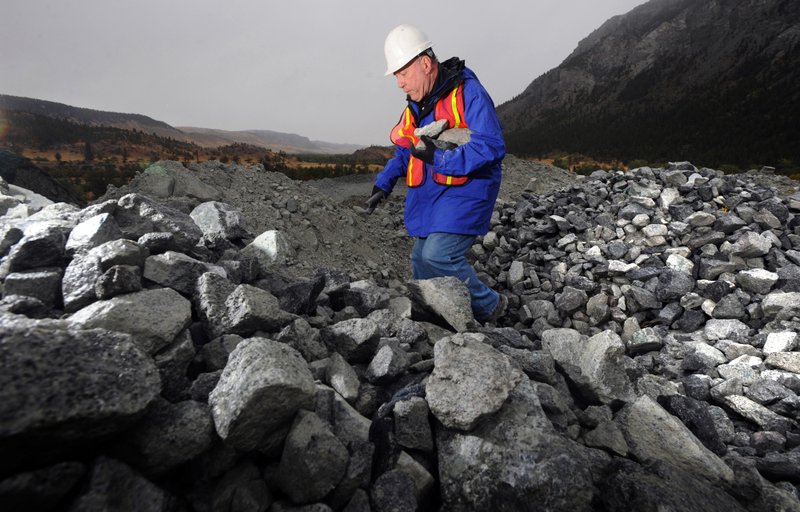 FILE - In this Sept. 2009 file photo, U.S. Geological Survey project geologist Doug Stoeser looks through a huge pile of waste rock from the Stillwater Mine in Nye, Mont. Mine owner Sibanye-Stillwater says it will add around 300 workers in Montana by the end of 2021. (James Woodcock/The Billings Gazette via AP, File)

BILLINGS, Mont. -- After a prolonged strike and a string of workplace fatalities in South Africa, executives at Sibanye-Stillwater are leaning heavily on its Montana platinum mines to turn things around at one of the world's largest precious metals mining companies.

The firm posted a $19 million loss for the first half of 2019, driven largely by a five-month strike at its South Africa gold mines that resulted in $193 million in costs and lost revenue. Twenty-four employees lost their lives last year, drawing scrutiny from industry regulators.

Chief Executive Officer Neal Froneman said in an interview that the difficulties in South Africa haven't slowed investments in the company's Montana operations, including the only platinum and palladium mines in the U.S., where there hasn't been a fatality in almost eight years.

Carved into the ancient rocky crags of south-central Montana's Beartooth Mountains, the underground mines will take on about 300 new workers and support staff by the end of 2021 as digging enters new areas, Froneman said. That will bring the Montana workforce to almost 2,000 employees.

Within a few years, the mines are projected to increase production by about 70 percent compared with when Sibanye bought them two years ago.

"Sibanye is putting a whole bunch of money into this place," said Ed Lorash, who works at the south-central Montana mines and is the local chapter president of the United Steelworkers union. "This is their sugar daddy right now."

Since the Stillwater purchase, there have been no repeats of the contract disputes that occurred under previous owners. The company also is honoring a "good neighbor" agreement signed in 2000 with local conservation groups to avoid lawsuits and protect waterways against environmental damage from mining.

Froneman says the company has been spending at least $100 million annually to expand its flagship Stillwater mine near Nye. The company's Montana assets now account for the majority of the company's earnings.

"We had a very tough 2018," Froneman said, characterizing last year's deaths in South Africa as anomalies. Most of the deaths occurred in its gold mines, which extend miles beneath the surface and suffer earthquakes and other problems.

There were two fatalities company-wide in the first half of the year.

"It's in a high-risk environment," Froneman said. "We've achieved more fatality-free shifts, but we've got a large number of employees."

The Montana mines and a palladium recycling facility in Columbus generated more than $200 million before taxes for the company in the first six months of the year, helping offset steep losses in its gold division.

High metals prices are also helping blunt the impact of the gold miners strike that ended in April with a new wage agreement. Palladium is trading at more than $1,500 an ounce -- roughly twice the price of two years ago. Platinum prices also have been trended up in recent months.

The metals are used in electronics, jewelry and to build catalytic converters that help reduce pollution from vehicle exhausts. The Trump administration last year listed platinum, palladium and related metals as minerals considered critical to U.S. security and the economy.

Before its acquisition by Sibanye, Stillwater Mining Co. gained attention when General Motors cancelled its supply contract with the Montana company in 2009 after the car maker went into bankruptcy. The move drew sharp criticism from the state's congressional delegation and former Gov. Brian Schweitzer, and the companies renewed ties the following year.

In 2013, Schweitzer became the public face of a shareholder takeover of Stillwater that ended with the ouster of its chief executive officer and Schweitzer as the chairman of its board. Schweitzer left with Sibanye's $2.2 billion purchase of Stillwater.

The expansion in Nye was in the works before Sibanye's purchase.