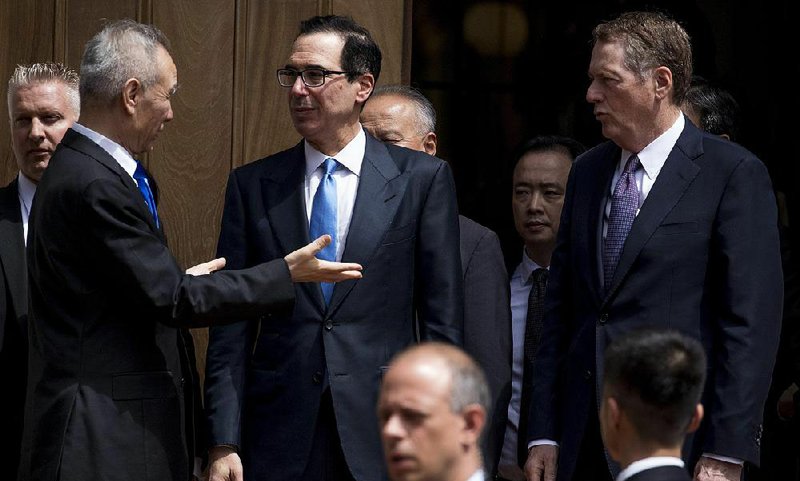 China’s chief trade envoy, Vice Premier Liu He (from left), talks with Treasury Secretary Steven Mnuchin and U.S. Trade Representative Robert Lighthizer during an unsuccessful round of talks in Washington in May. They plan to meet again in early October.

BEIJING -- U.S. and Chinese envoys have agreed to meet in early October for more talks aimed at ending a tariff war that threatens global economic growth.

Stock markets rose on Thursday's announcement but there has been no sign of progress since Presidents Donald Trump and Xi Jinping agreed in June to resume deadlocked negotiations about trade and technology.

The Trump administration is scheduled to ratchet up tariffs on Oct. 1 and in December.

The agreement on timing came in a phone call conducted by the chief Chinese envoy, Vice Premier Liu He, with U.S. Trade Representative Robert Lighthizer and Treasury Secretary Steven Mnuchin, the Chinese Commerce Ministry said in a statement.

A statement from the the trade representative's office confirmed that ministerial-level discussions will take place in "the coming weeks," without specifying when.

Officials will "conduct conscientious consultations" in mid-September to prepare, the Chinese statement said. It gave no details but said the two sides want to create "favorable conditions."

U.S. stock indexes marched broadly higher on the news of the planned talks. Bond yields jumped and the price of gold fell as investors regained a bigger appetite for riskier holdings.

Beijing is balking at U.S. pressure to roll back plans for government-led creation of global competitors in robotics and other industries.

The U.S., Europe, Japan and other trading partners say those plans violate China's market-opening commitments and are based on stealing or pressuring companies to hand over technology.

The U.S. and China have raised tariffs on billions of dollars of each other's imports, disrupting trade in goods from soybeans to medical equipment and battering traders on both sides.

In their latest escalation, Washington on Sunday imposed 15% tariffs on $112 billion of Chinese imports and is planning to hit another $160 billion on Dec. 15 -- moves that would extend penalties to almost everything the United States buys from China. Beijing responded by imposing duties of 10% and 5% on a range of American imports.

"The US is set to turn up the tariff pressure again on October 1st and if we don't see that threat taken off, markets will be skeptical that the October meeting [will] likely not see anything meaningful happen and that the trade war will not be resolved until after the 2020 US Presidential election," Ed Moya, an analyst with foreign exchange firm Oanda, wrote Thursday in a note to investors.

The October talks -- the 13th round of dialogue -- were previously scheduled for September. Chinese officials in recent weeks have suggested that lower-level discussions with Washington were continuing even while Trump has fumed on Twitter about China's behavior and threatened "much tougher" actions.

China has imposed or announced penalties on a total of about $120 billion of U.S. imports, economists estimate. Some have been hit with increases more than once, while about $50 billion of U.S. goods is unaffected, possibly to avoid disrupting Chinese industries.

Beijing also has retaliated by canceling purchases of soybeans, the biggest single U.S. export to China.

The Chinese government has agreed to narrow its politically sensitive trade surplus with the U.S. but is reluctant to give up development strategies it sees as a path to prosperity and global influence.

The trade war is taking a toll on both economies.

"Logically, it makes sense from economic and political standpoints for both Trump and Xi to put an end to the trade war," said Daniel Ikenson, director of the center for trade policy studies at the libertarian Cato Institute. "The U.S. manufacturing sector appears to be contracting and signs point to a broadening U.S. economic slowdown .... Meanwhile, the trade war is worsening troubles in the Chinese economy."

Ikenson said Xi is getting push-back from other Chinese officials who "are unhappy with the trajectory and tenor of the U.S.-China relationship under his leadership, [believing] that Xi has been unnecessarily provocative."

As a result, "there may be a window for striking a deal, which is far less significant than has been advertised, but which Trump and Xi can spin as respective wins to the domestic audiences they need to assuage," Ikenson said.

High-level talks broke down in May over how to enforce any agreement.

China insists Trump's punitive tariffs must be lifted once a deal takes effect. Washington says at least some must stay to make sure Beijing carries out any promises.

The last round of talks in July in Shanghai ended with no indication of progress. Neither government has given any indication it is ready to break the deadlock by offering concessions.

Some analysts suggest Beijing is holding out in hopes Trump will feel pressure to make a more favorable deal as his presidential campaign picks up. Trump has warned that if he is re-elected, China will face a tougher U.S. negotiating stance.

Xi has appeared to play down the possibility of a swift and comprehensive resolution to the trade conflict. In recent speeches, he has rallied the ruling Communist Party to brace for a protracted "struggle" with foreign adversaries.

On Tuesday, Xi spoke again in martial terms, telling the party to adopt a "combat spirit" and "be both commanders and combatants, cultivate and maintain a strong fighting spirit, and have tenacious will and superb fighting skills."

"The trade war has become a real stalemate -- the U.S. has more economic advantages, while the Chinese political advantage is more obvious," according to a commentary Thursday in the Communist Party tabloid Global Times. "Both sides face the choice" of whether to continue the lose-lose situation or to reach a deal with compromise from both sides, it said.

"The bigger impact is on China in our estimates at this point," International Monetary Fund chief economist Gita Gopinath said on Bloomberg Television, referring to the tariffs. "If these tensions continue and global growth were to, say, slow even at a faster pace than we think, then that could change financial market sentiment, that could change business confidence and that can slow down the global economy."

Information for this article was contributed by Joe McDonald and Paul Wiseman of The Associated Press; by Gerry Shih and Taylor Telford of The Washington Post; and by Josh Wingrove, Miao Han, Shawn Donnan, Kevin Hamlin, Michael Heath, Cormac Mullen, Qizi Sun and Yinan Zhao of Bloomberg News.