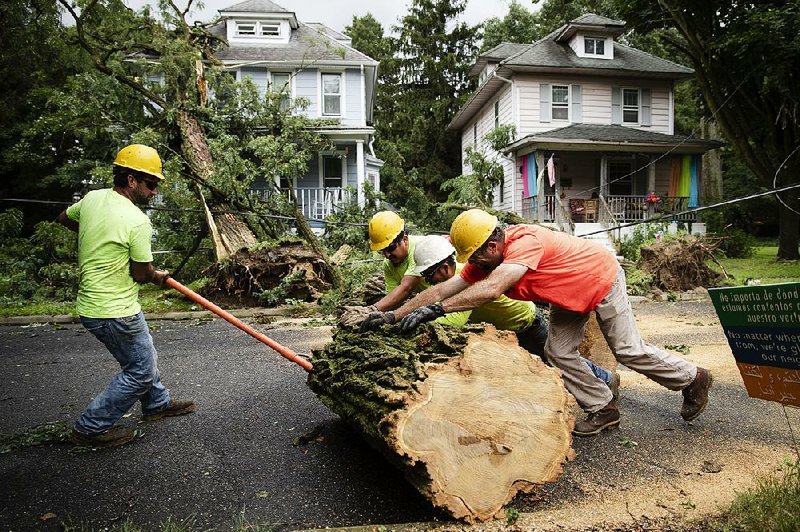 A tree service crew removes a downed tree in July after a storm in Collingswood, N.J. A trade group of purchasing managers reported a rebound in its index of nonmanufacturing activity in August.

WASHINGTON -- U.S. productivity rose at a healthy pace in the second quarter but dropped at American factories, another sign of trouble for manufacturers, the Labor Department said Thursday.

In a separate report, services expanded at a stronger pace in August, driven by an uptick in business activity and new orders, according to a purchasing managers' group.

The Labor Department said overall productivity -- output per hour worked -- rose at a seasonally adjusted annual pace of 2.3% in the April-June period after rising 3.5% from January through March. The second-quarter figure was unchanged from an initial estimate last month.

But manufacturing productivity fell 2.2% in the second quarter, the worst performance since a 4% drop in the third quarter of 2017.

Manufacturers have been hurt by President Donald Trump's trade war with China and a weakening global economy. The Institute for Supply Management reported Tuesday that its August manufacturing index signaled a contraction in factory activity for the first time in three years.

The Labor Department reported that output and hours worked at American factories dropped for the second straight quarter for the first time since recession year 2009.

Improving productivity is a key ingredient in raising living standards. It enables companies to lift workers' wages without raising prices. The recovery, now in its 11th year, had been held back by historically weak productivity growth.

In a sign that workers were more efficient, overall productivity rose partly because output rose 1.9% while hours worked fell 0.4% -- the biggest drop since the third-quarter of 2009.

Second-quarter labor costs rose 2.6% after a surging 5.7% from January through March. The increases could push up inflation.

Meanwhile, the Institute for Supply Management, an association of purchasing managers, said Thursday its non-manufacturing services index rose to 56.4 from 53.7 in July after two months of cooler growth. Readings above 50 signal growth, and the U.S. services sector has been expanding for 115 months.

Services make up the bulk of U.S. economic activity, so the results are a reassuring signal of continued economic strength.

While services companies surveyed express their concern over tariffs and geopolitical uncertainty, they appear so far to have avoided the challenges faced by the manufacturing sector. The institute's manufacturing index released Tuesday reported the sector shrinking for the first time in three years.

Paul Ashworth, chief economist at Capital Economics said the report was a reminder that "the U.S. economy is hanging in there, even though the manufacturing sector specifically is in recession."

The index's measures of business activity and new orders drove the rebound, climbing by 8.4 and 6.2 percentage points. Hiring activity fell by 3.1 points. This prompted some economists to compare the measure with a private survey released by payroll processor ADP, which reported Thursday that U.S. businesses added 195,000 jobs in August.

"Overall, you see the employment typically pick up in the fall," Nieves said.