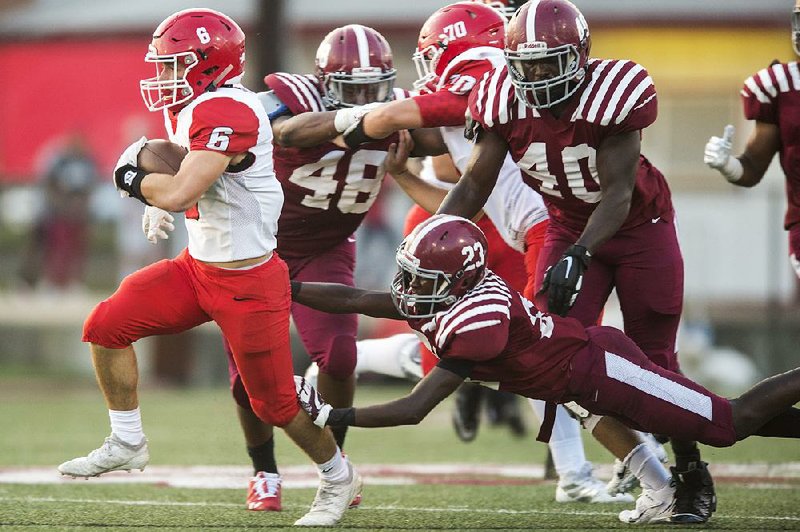 PINE BLUFF -- It was all about the Cabot Panthers in the second half.

In Scott Reed's first game as the Panthers' head coach, Cabot scored 31 consecutive second-half points on its way to a 43-19 victory over Pine Bluff on Friday night at Jordan Stadium.

Cabot (1-0) take advantage of two Pine Bluff turnovers in the second half to pull away from the Zebras.

"We calmed down," said Reed, who took over for the retired Mike Malham in December. "Our defense got turnovers. We got short fields. Our execution was much better in the second half."

Senior Rhett Thurman's second field goal of the game, this one from 38 yards, extended Cabot's lead to 22-13 with 6:54 remaining in the third quarter.

Cabot stretched its lead to 29-13 with 5:51 left in the third quarter as Gee found senior tight end Gage Morrow for a 20-yard touchdown.

Senior running back Graham Turner, who rushed for 66 yards on 21 carries, scored from 3 yards out to give the Panthers a 36-13 lead with 11:10 remaining.

Junior William Sheldon tacked on a 3-yard touchdown run with 2:47 remaining to make it 43-13.

Gee completed 11 of 17 passes for 135 yards with 3 touchdowns and 1 interception for Cabot, which has gone from former Malham's run-dominant Dead-T offense to Reed's Spread offense.

"Tyler's a gamer," Reed said. "He threw balls under pressure. He stood in and made some great throws. He has a good arm. He can throw the football."

Gee was proud of his team's offensive performance.

"We did amazing," Gee said. "I didn't think we'd accomplish this in the first game."

Rudolph caught 9 passes for 111 yards and 2 touchdowns for the Panthers.

Foots went 9-of-16 passing for 97 yards with 2 touchdowns and 1 interception for the Zebras (0-1), who were led by new Coach Rod Stinson.

Cabot led 5-0 after the first quarter thanks to a 34-yard Thurman field goal and a safety.

The Zebras took a 13-12 lead with 2:12 left before halftime as Foots completed a 67-yard touchdown pass to Xavier Turner.

Cabot hosts El Dorado, which was led by Reed for the previous 12 seasons, on Friday night at Panther Stadium. Gee hopes the Panthers can build on their victory against the Zebras.

"We just need to keep going with the momentum right now and don't stop," Gee said.