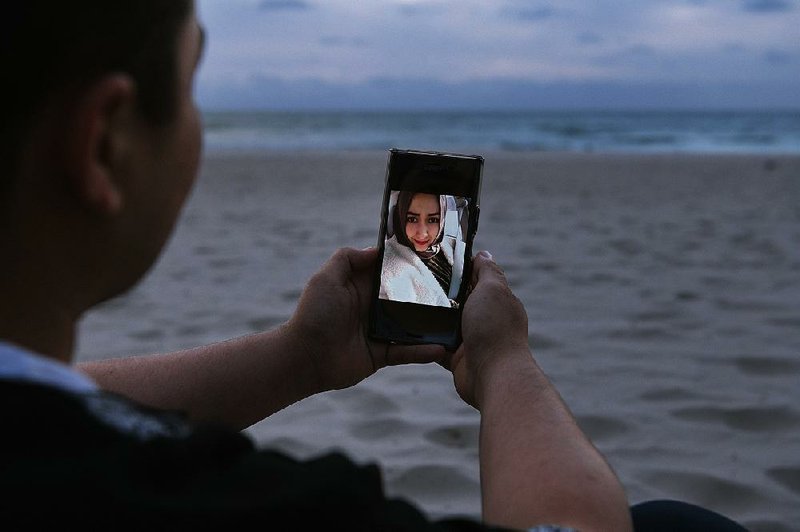 Almas Nizamidin is pictured with his wife, his high school sweetheart, at Glenelg Beach outside Adelaide, Australia, in January. His wife, Buzainafu Abudourexiti, was sentenced to seven years in prison in Xinjiang in 2017 for what Nizamidin calls trumped-up offenses.

The Chinese government has built a vast network of re-education camps and a pervasive system of surveillance to monitor and subdue millions from Muslim minorities in the Xinjiang region.

Now China is also turning to an older, harsher method of control: filling prisons in Xinjiang.

The region in northwest China has experienced a record surge in arrests, trials and prison sentences in the past two years, according to a New York Times analysis of previously unreported official data.

As the Chinese government pursues a "strike hard" security campaign aimed overwhelmingly at minorities in Xinjiang, the use of prisons is throwing into doubt even China's limited protections of defendants' rights.

Courts in Xinjiang -- where largely Muslim minorities, including Uighurs and Kazakhs, make up more than half of the population -- sentenced 230,000 people to prison or other punishments in 2017 and 2018, significantly more than in any other period on record in decades for the region.

Experts, rights advocates and exiled Uighur activists said Chinese officials have swept aside rudimentary protections in their push. The police, prosecutors and judges in the region are working in unison to ram through convictions, serving the Communist Party's campaign to eradicate unrest and convert the largely Muslim minorities into loyalists of the party.

Arrests, the critics said, are often based on flimsy or exaggerated charges, and trials are perfunctory, with guilty judgments overwhelmingly likely. Once sentenced, prisoners face potential abuses and hard labor in overcrowded, isolated facilities.

Xinjiang, like other parts of China, does not disclose how many people are in prison, and the regional government did not answer questions about incarceration and the legal statistics. Not all the people imprisoned in Xinjiang are from Muslim minorities, and not all charges are baseless.

The wave of arrests, prosecutions and sentences, however, points to an enormous upswell in imprisonment. It also appears unequaled in China's past, based on official reports going back decades.

"It's as if the whole population is treated as guilty until proven innocent," said Sean Roberts, an anthropologist at George Washington University who studies Uighurs, whose religion, Turkic language and traditions set them apart from China's Han majority. "These internment camps and prisons are not going away and stand as a warning to the population that they better be more loyal to the party."

The rates in Xinjiang, which has 24.5 million residents, far outpace those of comparable Chinese provinces. By contrast, Inner Mongolia, a northeast region of China that has roughly the same size population, including a large ethnic minority, sentenced 33,000 people last year.

Han Chinese residents have been largely spared from the wave of detentions, according to experts as well as data from Han-majority parts of Xinjiang. Arrests and indictments in areas run by the Xinjiang Production and Construction Corps -- a quasi-military administration overseeing areas with an 85% Han population -- rose modestly or remained flat in 2017.

"Uighurs have generally borne the worst" of security campaigns since the late 1990s, Roberts said. "It can be assumed that they were targeted inordinately in the arrests that have taken place since 2017."

The expanding population in prisons raises questions about Xinjiang officials' recent avowals that most of the inmates in re-education camps -- a separate system of incarceration -- have been released.

Uighur activists and overseas Uighurs with relatives in the camps have disputed Beijing's claim that the camps are shrinking. Interviews and government documents indicate that former camp inmates may be pressed into assigned labor or other kinds of detention.

And Uighurs living abroad who spoke with the Times said a sizable fraction of people held in re-education camps end up in prisons, citing messages from relatives still in Xinjiang. Detainees, they said, have been arrested and convicted after interrogators in the camps decided that they had committed offenses and sent them for criminal investigation.

"If you're willing to play along, and you work hard to show your loyalty to the Communist Party, then maybe you can move into less coercive detention," said James Leibold, an associate professor at La Trobe University in Australia who has studied the security offensive in Xinjiang. "But if you show any signs of resistance, it's escalated to formal imprisonment."

Security in Xinjiang has been tight for years. In 2009, hundreds were killed during ethnic riots in the regional capital, Urumqi, prompting the government to start instituting harsher policies.

Officials took the security drive to new extremes after Xi Jinping became China's leader in 2012 and demanded an end to the increasingly bloody anti-Chinese attacks by Uighurs. These attacks had spilled into other areas of China, including an assault in 2014, when perpetrators with knives killed 31 people near a train station. Prisons and re-education camps became weapons in the government's offensive to stifle the unrest.

That year, prosecutors in Xinjiang approved 227,261 arrests, more than eight times as many as a year earlier, according to a recently released official regional yearbook. In 2018, they approved an additional 114,023 arrests, an annual report from the regional prosecution office said. The total number of arrests over these two years was more than 70% higher than the cumulative total for the entire previous 10 years.

Few defendants are released as innocent. Xinjiang courts finished hearing 147,272 criminal cases in 2017, a more than fourfold increase from a year earlier, according to a yearbook of Chinese law. Last year, the courts heard 74,348 cases. They declared just 22 people not guilty.

The result has been a stark rise in the region's prison population.

In 2018, Xinjiang courts sentenced 133,198 people to criminal punishments, even more than the previous year. Many of the convicted face many years in prison.

Some receive death sentences, although the number is not publicly known. China does not release statistics on executions, which international human rights groups estimate to exceed any other country's.

The number of detainees in re-education camps who end up in prisons is also unclear. In interviews with the Times, many Uighurs and Kazakhs who have left China said they had been told of relatives imprisoned, sometimes after being detained in camps. Among 24 ethnic Kazakhs interviewed in January, six said family members had been imprisoned since 2017.

A sizable fraction of Uighurs sent to prisons were business people, professionals and academics, said Habibulla Altay, a Uighur tea merchant who left China in 2016 and has settled in Switzerland.

"The government thinks they are more dangerous because they have money and knowledge and often have been abroad," Altay said. He added that business friends in Xinjiang had informed him that one of his brothers-in-law, Aikeremu Tuerxun, a trade company manager, had been imprisoned.

"Families often don't know where their loved ones have disappeared," he said. "Then we hear that this person was sentenced, or that one is in prison. Almost every family has this experience."

Around towns and cities across Xinjiang stand hulking prisons, many newly built. The budget of the regional prison administration nearly doubled in 2017, and many prisons in Xinjiang expanded, construction announcements online show.

Even so, the prison system in Xinjiang has struggled to cope with a flood of new inmates.

Reports from Radio Free Asia, a Washington-based news service whose Uighur-language service has reported extensively on Xinjiang, have described trains full of detainees shipped from the region to prisons in other parts of China.

The Xinjiang government has not confirmed those reports. But there are other clues of a drastic expansion of the region's prison population.

"Together we've endured the hardest, riskiest, most challenging period in the history of prisons in Xinjiang," the regional prison authority said in a 2017 message thanking hundreds of prison officers transferred from other Chinese provinces to deal with a swelling population of inmates.

Analysis of satellite images from 23 sites of possible prisons in Xinjiang identified by Shawn Zhang, a law graduate in Canada who has studied the region's security buildup, revealed heavily guarded detention facilities. It was impossible to be certain if they were prisons, detention centers for suspected criminals, high-security re-education camps or a combination of such facilities.

Their features included multiple walls and fences, tall watchtowers and guard buildings with access to the walls. Nine of the sites had been built since 2016, and 12 previously built facilities had been expanded with new buildings in that time.

When Times reporters tried this past month to see one such facility on the desert outskirts of Hotan, a city in southern Xinjiang, guards stopped them. They claimed that the road was dangerous because of power cables, which they had just flung across it. When the reporters tried another route, police officers threw up a roadblock using traffic cones.

"I'll just tell you that this is a closed road," an officer said. 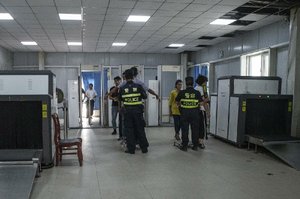 Photo by The New York Times/GILLES SABRIE
A security checkpoint is equipped with facial recognition technology in Hotan, China, in Xinjiang province. The region in northwest China has experienced a record surge in arrests, trials and prison sentences in the past two years. 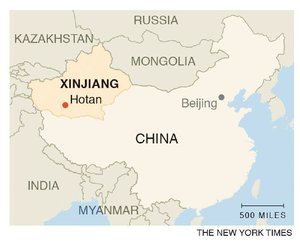 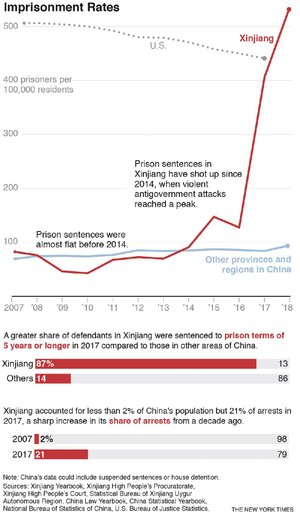