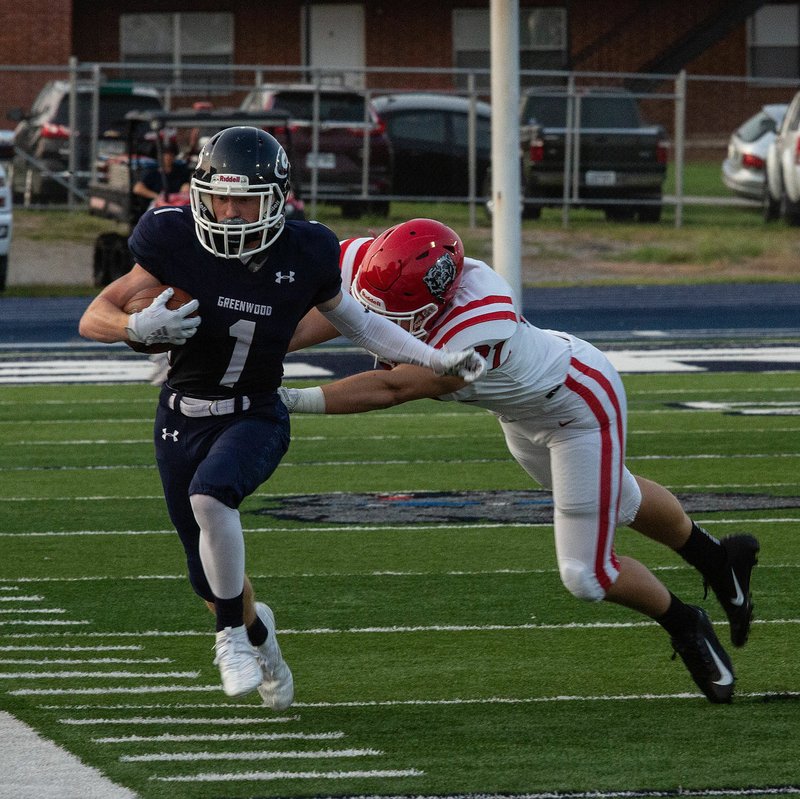 Greenwood’s Caden Brown (1) is forced out of bounds by Fort Smith Northside’s Stenson Van Matre on Friday during the first quarter of the Bulldogs’ 38-10 victory over the Grizzlies in Greenwood.

GREENWOOD -- The Greenwood defense forced three turnovers, and that was all the Bulldogs' offense needed.

Jace Presley threw for four touchdowns in his first start to lead Greenwood to a 38-10 victory over Fort Smith Northside on Friday at Smith-Robinson Stadium.

The Bulldogs (1-0) converted all three turnovers by the Grizzlies into touchdowns and shut out Northside (1-1) in the second half. Greenwood led 13-10 at halftime, then pulled away in the third quarter.

"It was good to be in that situation [a close game] to see what you are made of," Bulldogs Coach Rick Jones said. "I was proud of how our kids played in the second half. I was pleased with the way our defense created turnovers and the offense capitalized."

Presley was 21-of-33 passing for 274 yards. The Bulldogs' offense gained 413 yards and had no turnovers.

"I thought Jace played awesome for his first rodeo," Jones said. "He made good decisions with the football. They call it 'playing within yourself,' and so he did what he was supposed to do. He didn't take many chances."

Momentum shifted on Northside's two third-quarter turnovers, which helped turn a 13-10 game into a 31-10 game.

After a muffed punt by the Grizzlies placed the ball at the Northside 2, a bad snap fell into the end zone and Greenwood's Logan Workman recovered for the touchdown to make it 20-10 Bulldogs three minutes into the third quarter.

One play after the ensuing kickoff, Northside fumbled again, and Jordan Hanna recovered at the Grizzlies' 38. Presley hit Aaron Ligon for a 14-yard touchdown, then hit Michael Hurt on the two-point conversion for a 31-10 ead with 19 seconds left in the third period.

The Bulldogs scored on their first two possessions of the game to take a 13-0 lead.

Presley was 5-of-7 passing on the opening drive for 59 yards, capped by a 28-yard pass to Hunter Wilkinson for a 7-0 lead with 8:57 left in the first quarter.

After a Jayden Jasna interception gave Greenwood possession at its 43, the Bulldogs faced a third down at the 45. Presley avoided a sack and hit Caden Brown on the left sideline. Brown broke a tackle that would have forced a fourth down and raced down the sideline for a 55-yard touchdown.

The PAT kick was wide left, leaving Greenwood up 13-0 with 3:44 left in the opening quarter.

The Grizzlies' offense awakened on its fourth possession, marching to the Greenwood 2 before an intentional grounding call on third down moved the ball back to the Bulldogs' 25. Dagon Moore booted a 42-yard field goal with 11:44 left in the first half to get Northside on the board, though still trailing 13-3.

After the Northside defense stiffened, the Grizzlies marched 86 yards in seven rushing plays, capped by Dreyden Norwood's 7-yard keeper. Moore's kick got Northside to within 13-10 with 6:26 left in the half.