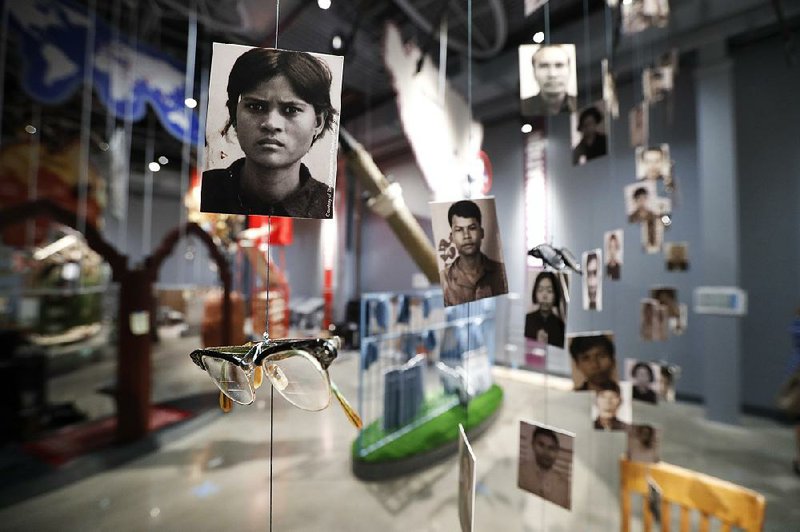 An exhibit hangs from the ceiling in part of the Dallas Holocaust and Human Rights Museum in Dallas. This area of the museum educates visitors of genocide.

DALLAS -- When the Holocaust museum in Dallas opens the doors to its new building, visitors will be not only learning about the mass murder of Jews during World War II but also other genocides that have happened around the world, as well as human rights struggles in the U.S.

The newly renamed Dallas Holocaust and Human Rights Museum is the latest in the U.S. to broaden its permanent exhibit and embolden its efforts to inspire visitors to take action to make the world a better place.

"We're hoping that in the moments that they finish this journey they will be thinking: What can I do? How can I make a difference in my community?" said Mary Pat Higgins, the museum's president and CEO.

Expanding the focus to include more recent atrocities and human rights struggles helps draw in more visitors to be reminded that the lessons from the Holocaust are still relevant.

The museum opening Sept. 18 in Dallas is five times bigger than its previous location -- a jump from 6,000 square feet to 55,000 square feet. Museum officials said they are aiming for 200,000 visitors a year -- more than double the previous figure.

The Holocaust Museum Houston has already seen a jump in visitors since reopening in June after a renovation and expansion that more than doubled its size. The primary focus of the original museum was the Holocaust, but it now details other genocides and has tributes to human rights leaders including Nobel Prize laureate Malala Yousafzai, who as a child in Pakistan began advocating for girls' education.

"We look at it like as: if we can get them in the door and attract them on -- it might be something like a social activism -- then they can also benefit from learning about the Holocaust when they're here," said Kelly Zuniga, CEO of the Houston museum.

In Cincinnati, the Nancy and David Wolf Holocaust and Humanity Center's move in January into Union Terminal train station meant that it could include a gallery showcasing people who have made positive changes in their community. "We examine individuals who stood up and who seized the moment and we talk about their character strengths," said Jodi Elowitz, the center's education director.

Two years ago the Illinois Holocaust Museum and Education Center in Skokie opened as part of its permanent exhibit the Take a Stand Center, which is focused on human rights. "Hopefully they're getting knowledge, they're finding their passion or their particular cause or issue that they're interested in," said Kelley Szany, vice president of education and exhibitions for the museum.

The Dallas museum's orientation video asks the question: Why should visitors care?

"The rest of the museum goes on to not answer the question because we don't provide answers. We do provide direction. We expect you to be able to answer the question however you were impacted," said Eddie Jacobs, who designed the exhibit with fellow Berenbaum Jacobs Associates founder Michael Berenbaum.

The gallery detailing genocides that happened before and after the Holocaust uses sculpture and graphic novels to help visitors understand the tactics that led to the mass killings. The sculpture on the mass murder of Tutsis by the Hutus in Rwanda in 1994 includes machetes and victims' racial identification cards. A graphic novel notes that polarization tactics that led to the genocide included Tutsis being referred to as cockroaches, pointing out that the Nazis portrayed Jews as rats and poisonous mushrooms.

The last stage of the visit turns to the U.S. for an exploration of how American ideals compare to reality, Berenbaum said. Visitors use interactive touchscreens to explore their own attitudes and biases. As they end their visit, they can learn about volunteer opportunities.

"The Holocaust is remembered. The question then becomes deeper: How is it remembered and what are we to do with that memory?" Berenbaum said.

Max Glauben, who as a Jewish teenager from Poland spent time in Nazi concentration camps, where his parents and brother were killed, helped found the Dallas museum. Glauben, who immigrated to the U.S. after WWII, hopes the museum inspires people to take inventory of their own lives.

"Maybe after seeing all this they realize that maybe we should become better," said Glauben, 91. 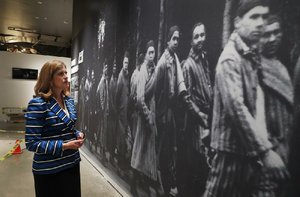 Photo by AP/TONY GUTIERREZ
Dallas Holocaust and Human Rights Museum President and CEO, Mary Pat Higgins, pauses as she gives a tour of the museum in Dallas, to look at a wall size image of Jews marching. When Dallas’s Holocaust museum reopens Sept. 18 it will not only be in a new building five times the size of its previous location, but will take visitors on a journey that also includes modern-day genocides and the evolution of human and civil rights in the U.S.