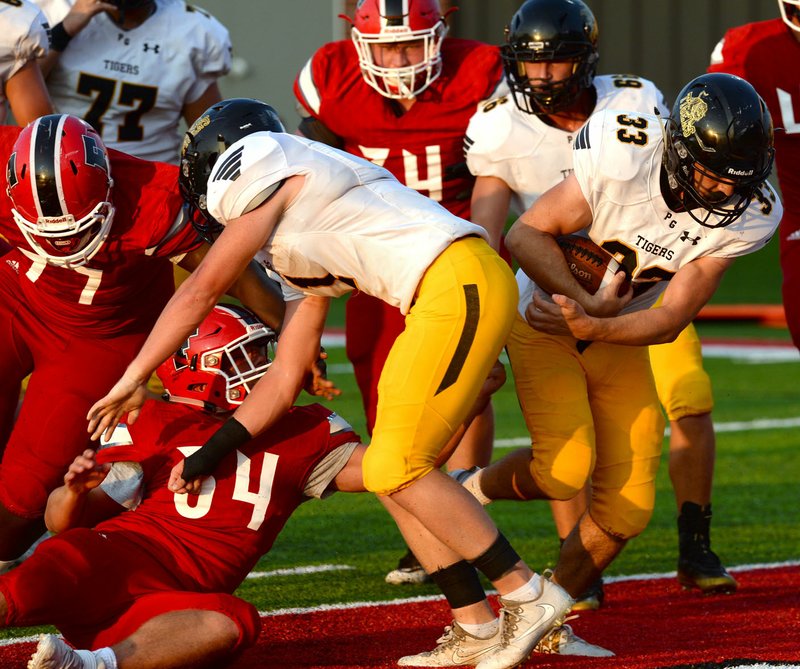 NWA Democrat-Gazette/ANDY SHUPE Prairie Grove fullback Foster Layman (33) carries the ball into the end zone Friday, Sept. 6, 2019, past Farmington linebacker Hayden Cox (34) during the first half of play at Cardinal Stadium in Farmington. Visit nwadg.com/photos to see more photographs from the game.

FARMINGTON -- Drew Sturgeon scored a pair of touchdowns, and the Farmington defense did its job as the Cardinals knocked off their rivals in the season opener for both teams at Cardinal Stadium.

After Farmington took a 7-0 lead, the Cardinals had an answer on their opening drive. Quarterback Marqwaveon Watson hit Sturgeon for 19 yards on a third and 6, then Watson ripped off a 22-yard run on a second and long. On fourth down at the Prairie Grove 5, Watson hit Sturgeon on a slant for a touchdown to tie the game at 7-7 with 9:52 left in the second quarter

Farmington (1-0) took the opening drive of the second 81 yards to take the lead. Farmington moved ahead on Ian Cartwright's 1-yard run with 9:04 left in the third quarter.