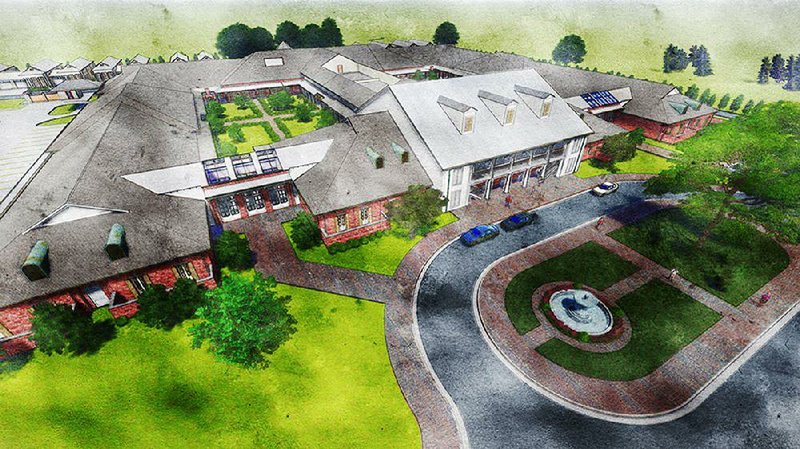 P. Allen Smith is teaming up with Arkansas real estate developers to build the Gardens of Somerset, a $32 million retirement community in Sterlington, La., about 50 miles south of El Dorado.

Two well-known Arkansas developers and a nationally recognized landscape designer are working together to breathe new life into senior-citizen communities.

Construction begins next week on the $32 million project in Sterlington, La., that is described as a "multi-generational community" that will encourage senior citizens and residents to learn, live and play together. Sterlington is about 15 miles north of Monroe, La.

"I've watched over the years how my residents interacted with the community," Thomason said. "They did things together, but they weren't really engaged in the community. I'm trying to create purpose in their life. Just because they're aged and may need a little help, it doesn't mean they don't have a lot to contribute."

"This is more than sticks and bricks," Smith said. "We're trying to create a vital community -- one that is engaging and integrated into the existing community."

Somerset is designed with formal and informal gardens, green spaces, walking paths, water elements and nature preserves. The property will have a main building with 80 apartments to provide independent living, assisted living and memory care. That building also will provide event and meeting facilities and a large kitchen. There will be 20 independent-living cottages on the property.

"We're basically developing a new assisted-living concept and something that hasn't been done before," said Moses, whose firm is the second-largest commercial brokerage and management company in Arkansas. "The way we're doing it is to test the concept there and take it to other markets."

Members of 4-H Clubs will be on the property to work with a flock of chickens that Smith is providing. Students also will be invited to help with produce grown on the site and to cook meals for residents. "Those interactions will give residents purpose and a reason to get up in the morning," Thomason said.

The main house will host weddings, anniversary parties and other special events. "Our residents could create flower arrangements, help set up tables, or show people where to park," Thomason said.

"I needed to have a differentiator, and that's what we're creating. You can go look at some facilities and they may look like the Taj Mahal, but if the residents are just sitting there, they're not really interacting with the community," he added. "Going to a Walmart on a Saturday is not an activity."

Thomason said the next project is targeted for Flowood, Miss., and he expects work on it will begin early next year.

To build interest with neighbors, Smith has conducted a series of meetings to explain the project and ask for feedback. "We've talked about what kinds of things would be interesting enough to bring them to our site and interact with our residents, and vice versa," he said.

Other Arkansas companies working on the Somerset project include Harco Constructors of North Little Rock and Cromwell Architects Engineers of Little Rock.