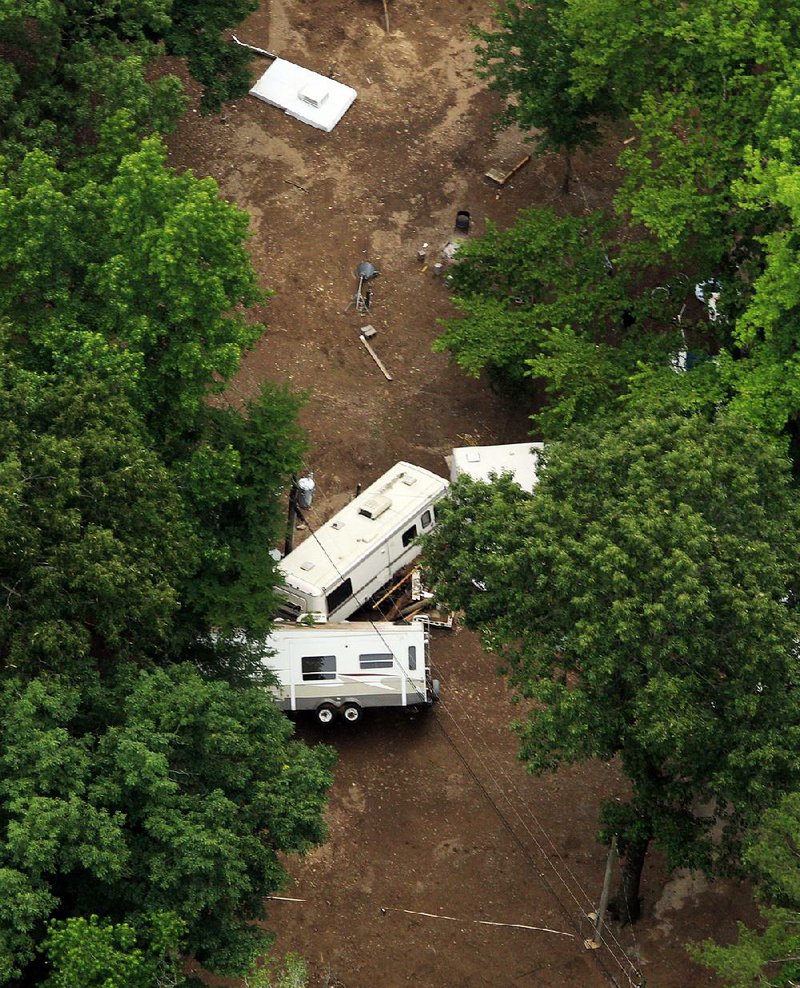 An aerial photograph taken June 11, 2010, shows recreational vehicles and camper trailers strewn through a campground at the Albert Pike Recreation Area in Montgomery County after the Little Missouri river flooded before dawn that day, catching campers without warning and killing 20 people. The once popular recreation area has been closed since then, but the U.S. Forest Service is studying the possibility of reopening it with safeguards.

Nine years after 20 people died in a flash flood at the Albert Pike Recreation Area, the U.S. Forest Service is considering reopening the area to overnight camping.

The Forest Service says it will conduct an environmental analysis to determine the future use of the recreation area, which is in a remote and rugged section of the Ouachita Mountains in Montgomery County.

There will be several opportunities for public engagement, according to a news release. The environmental analysis will begin in late fall.

But U.S. Rep. Bruce Westerman, R-Ark., couldn't wait that long. He held a meeting Tuesday at the Glenwood Public Library to hear from the public. About 50 people attended. Several said the park should be reopened for camping, citing family vacations going back generations.

Walker started a Facebook page called Save Camp Albert Pike. He also got 1,456 people to sign a petition asking that Albert Pike be reopened to camping.

Don Watson, a Glenwood artist, shot video of the meeting and posted it on his Facebook page.

Westerman told the crowd that he was for overnight camping at Albert Pike.

"We need to come up with a way to meet people's needs," he said. "We have an inherent risk when we're out recreating in public lands, or any kind of lands. And these are public lands. I think we should have access to public lands. ... Twenty people lost their lives at that campground. I don't ever want to make light of that and not be respectful of those families and what happened."

Westerman said lawsuits concerning the disaster had run their course.

"We need to get back in there and come up with a plan for Albert Pike," he said. "But with those legal issues out there it was really not very good timing to start working on doing anything with the park. But that has since passed."

Westerman said the campground is important for residents of southwest Arkansas as well as to visitors from neighboring Louisiana, Texas and Oklahoma.

Some people who spoke at the meeting had reservations about reopening all of the campgrounds, particularly Loop D, where 17 people died in floodwaters that roared down the Little Missouri River in the predawn hours of June 11, 2010.

"If you are going to have a cemetery where you mourn the dead, you mow it, you keep it clean," said Phyllis Disotell of Taylor. "We have an Albert Pike that has turned into a cemetery. That's what I'm most hurt about. I'm not here to fight to have that park reopened to overnight camping. I'm here to say I want it cleaned up."

Disotell said the state should build a playground for kids at Albert Pike and a "good campground," perhaps in a safer area nearby.

Janice McRae, who lives near the park and owns Camp Albert Pike Cabins, remembers the flood of 2010. She called 911 and helped victims afterward.

"I'm against overnight camping there in the camping area in the same situation that it was nine years ago," she told the crowd at the Glenwood library. She said there wasn't enough law enforcement coverage at the campground.

On Wednesday, McRae posted "random thoughts" on her Facebook page about people's passionate efforts to save the campground -- to camp "at a certain spot in the summertime."

"Friends, it really isn't the place that was important," she wrote. "It was the time spent there with family and friends. The memories are of happier, simpler, more innocent times. I think we all yearn for that."

On Thursday, McRae said she had mixed feelings about Albert Pike being reopened to overnight camping.

"Selfishly, I do not [want it reopened to camping]," she said. "Realistically, I do not. But I do understand why others want to camp here and why they long for the peacefulness and simplicity of this area. I want it to be a perfect world where skies are always sunny and mothers always smile when their children are in the waters of the Little Missouri River. ...

"I want many generations to love these mountains, just as many generations have before me. I want it to be known for its peacefulness and beauty, not as 'the place where all those people drowned.'"

Two of the recreation area's four "loops" -- C and D -- are closed. Loops A and B are open for seasonal day use, normally from mid-April to mid-September, said Tracy Farley, a spokesman for the Forest Service.

McRae said a woman and child were stranded recently in the park during a day trip after the river rose quickly.

Others at the meeting said Loop D should remain closed to overnight camping because it's still susceptible to flooding. It was the only part of the federal park that offered RV hookups.

Loop C was being renovated to accommodate RV sites and hookups when the flood occurred.

Loops A and B were assigned to tent campers.

The Albert Pike Recreation Area was developed by the Forest Service in 1934 and improved over the years.

Kenn Green, a member of the Montgomery County Quorum Court, said he hoped there would be similar meetings in Mount Ida and Mena as well.

"We would like to see the campground opened back up for economic reasons," he said.

Kevin Mitchell of DeSoto Parish, La., said he has been going to Albert Pike for 51 years.

Mitchell said he could camp off by himself, but he felt safer camping in a designated campground.

"My idea of being in that park area is safety in numbers," he said. "You feel more safe when you've got people all around you than I am when I'm camped up there on the side of the mountain."

In a telephone conversation, Doug Sinks said the Albert Pike campground provided affordable family vacations for many in the Arkansas, Louisiana, Texas region.

"A place the common ordinary working guy can stay and not spend a fortune," said Sinks, who for 17 years owned the Langley Store 6 miles south of Albert Pike.

Sinks sold the store last month. He and his wife, Toy Sinks, are moving to Arizona. But Doug Sinks said he'll continue to fight for the return of camping at Albert Pike.

"Having grown up recreating in the outdoors, I know how important campgrounds like Albert Pike are to recreational enthusiasts," Westerman said Friday. "Public meetings are an important step in making sure I hear from the community and have an open dialogue on concerns and paths forward. I was glad for the opportunity to meet with constituents this week as they voiced their input."

Westerman said anyone who wasn't able to attend the meeting and would like to share their thoughts on the issue can call his office at (202) 225-3772. 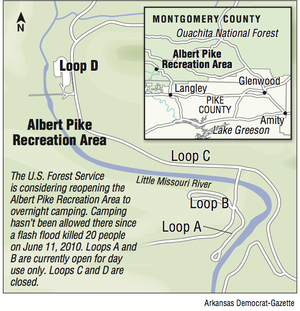