Coach Blake Anderson -- who was on a leave of absence for nearly three weeks after his wife, Wendy, died of cancer Aug. 19 -- announced he was returning to the sidelines to coach the Red Wolves, an ASU team spokesperson confirmed to the Arkansas Democrat-Gazette.

"Leave of absence is over," the spokesperson said.

Anderson surprised the Red Wolves with the news during a meeting at the team hotel before they headed to Sam Boyd Stadium.

ASU football's Twitter account later tweeted out a video of Anderson unexpectedly walking into the team's pregame meeting at the hotel. Red Wolves players were ecstatic and mobbed their head coach.

"Y'all got room for one more?" Anderson said in the video as he entered the room.

There had been no indication this week of a possible return by Anderson, nor was there a long-term timeline. The prevailing consensus from ASU Chancellor Kelly Damphousse, Athletic Director Terry Mohajir and interim Coach David Duggan had been that Anderson would return to coach whenever he felt ready. 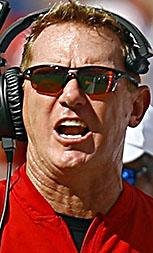