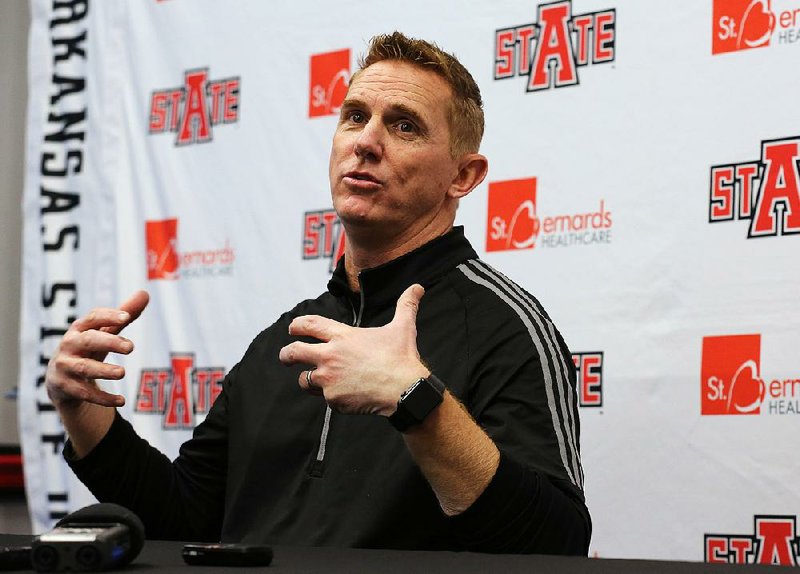 In a stunning twist Saturday night, Arkansas State University Coach Blake Anderson returned to lead the Red Wolves after nearly a three-week absence as a result of the death of his wife, Wendy, to cancer on Aug. 19.

“Y’all got room for one more?” Anderson said as he walked into ASU’s pregame meeting at the team hotel over two hours before kickoff.

ASU players had no idea their head coach would be joining them in Las Vegas. In Anderson’s return, ASU shook off last week’s shaky season-opening loss and delivered a 43-17 victory over UNLV at Sam Boyd Stadium. ASU moved to 1-1, with a road trip to face No. 3 Georgia looming Saturday.

“It’s hard to put into words,” Anderson said in postgame remarks on the Facebook stream of the game. “It’s been a lot for [the players] to do, been really proud of them.

"They wanted to win last week, and we didn’t get it done. Just thought if I showed up today, maybe it’d lift their spirits a little bit. It definitely lifted mine, and [we] found a way to play exactly the way we needed to. Just a great group of dudes. I love them to death. I’m proud of them.”

It was a complete performance by the Red Wolves from start to finish. ASU put up 498 yards of offense, junior quarterback Logan Bonner completed 22 of 37 passes for 284 yards and 2 touchdowns, senior wide receiver Omar Bayless tallied 6 catches for 149 yards and a touchdown, and junior running back Ryan Graham rushed for 103 yards and a score.

Defensively, ASU shut down the Rebels’ offense for most of the night, limiting them to 219 yards through three quarters. UNLV quarterback Armani Rogers completed 8 of 23 throws for 42 yards and an interception while rushing for 4 yards. ASU’s defensive line was relentless as the Red Wolves posted six sacks.

Just like the season opener against SMU, the Red Wolves’ defense provided a spark on the opening drive. Last week, senior nickel back Darreon Jackson came away with an early interception. On Saturday night, senior cornerback Jeremy Smith picked off Rogers on the third play from scrimmage and returned it 35 yards for a touchdown, giving ASU a 7-0 lead with 13:45 left in the opening quarter.

Later in the quarter, sophomore kicker Blake Grupe tacked on a 26-yard field goal to make the Red Wolves’ lead 10-0 with 4:40 remaining.

Besides a 16-play, 64-yard that covered nearly six minutes and ended with a 27-yard field goal, UNLV’s offense was stifled in the first half. After the Rebels’ field goal with 13:42 left in the second quarter, which cut the deficit to 10-3, ASU drove down the field on the ensuing drive to UNLV’s 14. But the Red Wolves were stopped on fourth and 4 after Bonner’s pass to junior receiver Jonathan Adams in the end zone was batted away.

The Rebels had some momentum, but it didn’t last long.

UNLV’s ensuing drive went three-and-out, and a shanked 17-yard punt allowed ASU to start its next drive at the Rebels’ 31. Five plays later, Bonner walked into the end zone untouched on a read option play for a 1-yard touchdown run, putting the Red Wolves up 17-3 with 8:45 left before halftime.

From there, the Red Wolves stayed in control. ASU took a 23-3 lead into the half thanks to a 9-yard rushing touchdown by Graham.

On the opening drive of the third quarter, Bonner and senior receiver Kirk Merritt — who returned to the starting lineup Saturday after being knocked out of the season opener in the first quarter with an injury — connected on a 37-yard touchdown pass. The Red Wolves took a 30-3 lead with 12:30 left in the quarter.

Grupe booted a pair of field goals, but ASU’s exclamation point came early in the fourth quarter. Facing a third and 11 from the ASU 29, Bonner hit Bayless down the sideline before he turned up field and sprinted for a 71-yard touchdown, giving ASU a 40-10 lead with 12:58 remaining.