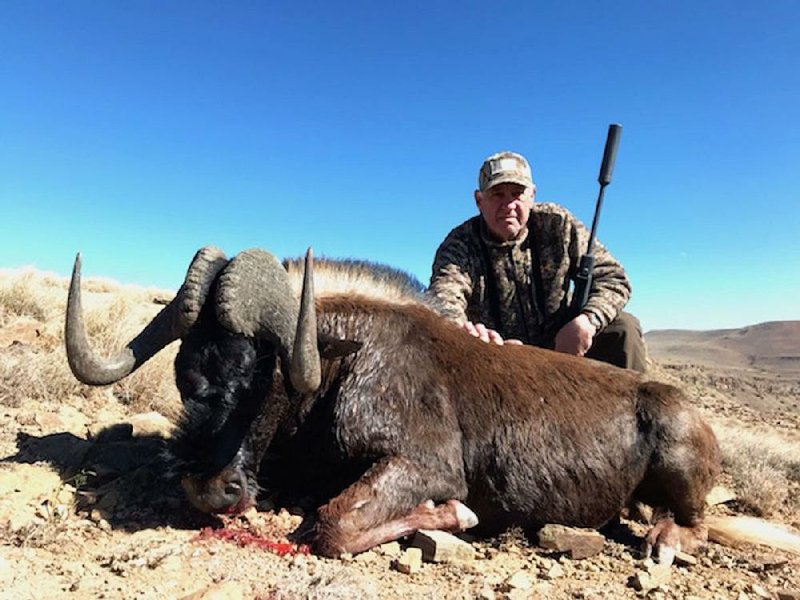 Bob Rogers of Maumelle took his first safari to South Africa on July 18-29. He killed five animals, including a black wildebeest (shown), greater kudu and impala. Rogers said nothing prepares a first-time visitor for the majesty of seeing African game animals up close in their native habitat.

No matter how many videos you watch, Bob Rogers of Maumelle says nothing prepares you for seeing the majesty of African big game in person.

Rogers, an avid duck and deer hunter, has long wanted to hunt plains game in Africa. He finally got the opportunity July 18-29 after winning a safari at a Safari Club International auction in Kansas City, Mo.

"It's funny the way it happened," Rogers said. "A friend of mine lives in Kansas City, and he's a member of the Kansas City Safari Club. He told me they were going to auction off this hunt in South Africa."

The friend said many of the club's members would be attending a bigger Safari Club meeting in Las Vegas, so Kansas City would have a small pool of bidders. He said the auction would probably top out at $1,500-$2,500.

"That is just dirt cheap," Rogers said, so he asked his friend to bid as his proxy.

With air fare and lodging, Rogers spent about $8,000. That's expensive until you consider how much it costs for an Arkansan to hunt big game in one of the western states. It costs $660 to buy an over-the-counter bull elk tag in Colorado. A guided hunt for a trophy bull elk in the Rocky Mountains costs $8,000-$10,000. It would cost thousands of dollars to kill an impala, springbok and wildebeest on an exotic game ranch in Texas.

[Video not showing up above? Click here to watch » https://www.youtube.com/watch?v=ZF-02s6eFpQ]

Rogers actually hunted with two outfitters in Africa. One was Wintershoek Safaris and the other was Southern Cross Safaris. Wintershoek's land is at the southern edge of the Kalahari Desert, Rogers said.

"It was like walking on a red sand beach," Rogers said. "It's very dry and very flat. They feed the animals, and they have wells dug for them. They take care of them. If they didn't, there wouldn't be any animals there because there's not enough there for them to eat."

Southern Cross Safari's land is in the mountains.

It is winter in South Africa, Rogers said, so the weather is pleasant. Morning temperatures are in the 30s, rising into the 70s in the afternoons. Regardless of the temperature, the professional hunters that lead the outings always wear short pants, Rogers said.

"One thing I found out real quick over there is that anything that ain't grass has thorns on it," Rogers said.

Even so, Rogers wore tennis shoes instead of hunting boots. Because a hunter stalks game in Africa, the most important consideration is watching your step, Rogers said.

"We grew up hunting whitetails here, but you you don't stalk them. You sit and wait on them," Rogers said. "In Africa, you stalk everything. You have to be quiet. Let the P.H. [professional hunter] worry about the animal. You worry about where you put your feet."

Upon meeting the professional hunter, a waltz occurs between him and the client. The P.H. asks a lot of questions to find out if the client is safe and proficient with a firearm, and the ranges at which he is comfortable shooting at game. He also wants to know if the client is in suitable physical condition for rigorous stalking.

"He wants to know all this, so he'll know how hard he has to work to get you in range," Rogers said. "If you are comfortable shooting 200 [yards], that's so much better for him. If you're a 100-yard shooter, he's going to have to work harder to get your animals."

The professional hunter and his clients scout from a vehicle. They look at animals through binoculars to find one that a hunter wants to shoot. Hunters do not shoot from vehicles, and animals tend to run when they see a vehicle.

"These animals are wilder than they are in the national parks," Rogers said. "In the parks, animals will just stand there and let you take pictures of them. On these ranches, animals see that truck coming, they're getting out of Dodge."

You must follow them on foot, and that process can cover a lot of time and distance.

"You walk single file," Rogers said. "The P.H. leads you out. The hunter follows him, and the trackers are behind. That way there's only one profile for an animal to see. When you get in range, they set up shooting sticks, kind like a tripod, and you shoot off that."

Rogers said he bought shooting sticks and practiced with them locally before the safari. It was a big help because it's hard to keep a rifle steady amid the excitement and exertion of a big game stalk.

"It's not the easiest thing to do," Rogers said. "Even though you think you've got a good rest, that crosshair is still moving pretty good. If you push down on it with the front of your rifle, it will give you a steadier rest."

Sometimes, a hunter isn't comfortable with the shot. Even though it means more work, Rogers said the professional hunter respects an honest hunter that recognizes his limitations.

"The first P.H. we had was a German guy in his 40s named Willy," Rogers said. "He's a great guy, easy to talk to. Sometimes I just had to say, 'I'm not comfortable with the shot, Willy. Let's find another one,' and he was OK with it."

Some hunters say that a 375 Holland and Holland magnum is the minimum power cartridge for African game. Rogers shot his wildebeest, impala and springbok with a 300 Winchester Magnum. He shot his kudu with a 30-06 and his warthog with a 22-250.

Rogers advises leaving your own guns at home.

"If you take a gun, you have to take it through customs," Rogers said. "You've got to worry about how it was treated by baggage handlers and how it rode in the plane. You have to worry about how long it will take [to] sight it back in. Shoot their ammunition and their guns."

Set a budget, Rogers said, but leave some latitude to be opportunistic. Don't nickel and dime yourself out of an opportunity to take a bucket-list animal.

"Ask your P.H., 'What's it going to cost to shoot that?'" Rogers said. "Think about it for a second, but don't think about it long because that animal isn't going to sit there and let you check your bank account."

Most of all, be prepared to be awestruck. 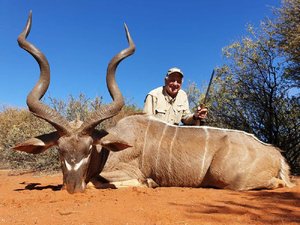 Photo by Photos submitted by Bob Rogers
Bob Rogers of Maumelle took his first safari to South Africa on July 18-29. He killed five animals, including a black wildebeest, greater kudu (shown) and impala. Rogers said nothing prepares a first-time visitor for the majesty of seeing African game animals up close in their native habitat.

Photo by Photos submitted by Bob Rogers
Bob Rogers of Maumelle took his first safari to South Africa on July 18-29. He killed five animals, including a black wildebeest (left), greater kudu (middle) and impala. Rogers said nothing prepares a first-time visitor for the majesty of seeing African game animals up close in their native habitat.