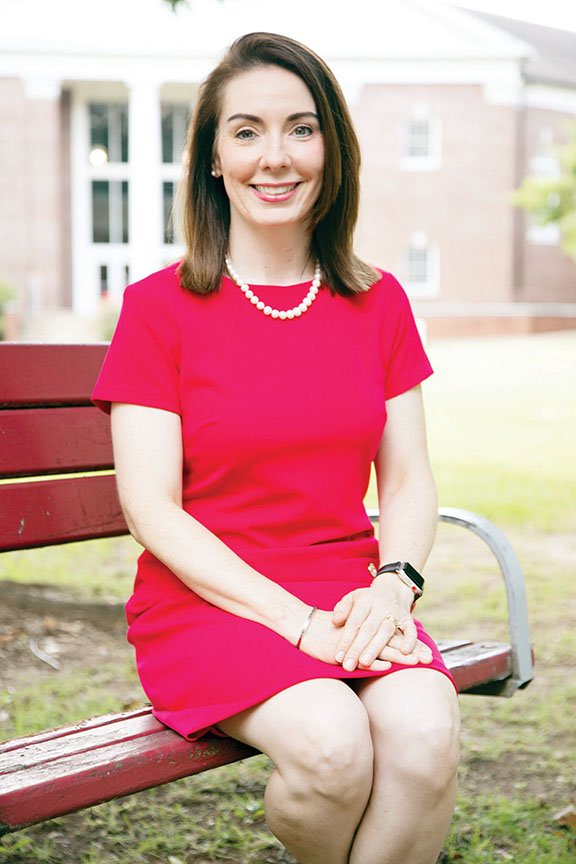 On the lock screen of her phone, Elaine Kneebone has a quote from Dr. Seuss’ The Lorax. It says, “Unless someone like you cares a whole awful lot, nothing is going to get better. It’s not.”

Kneebone said it is one of her favorite quotes, but it could not ring truer for the position she currently finds herself in. In July, Kneebone was selected as the interim president for Henderson State University in Arkadelphia, following the resignation of former president Glen Jones Jr., who served in the position for seven years.

“The university has been such a big part of my life from the very beginning that I wanted to do everything I could to help get it through this transition and to see it grow,” Kneebone said. “We know that what is good for Henderson is also good for Arkadelphia, so I’m not only doing it for my university, but I’m also doing it for my hometown and my community.”

According to an Arkansas Democrat-Gazette story, Jones resigned July 19 “after weeks of questions concerning debt the university faces that resulted in part from students not paying their bills to the school.”

“Elaine knows and loves Henderson. She is committed to the success of this campus, especially our students,” said Johnny Hudson, chair of the Henderson State University Board of Trustees. “I am grateful for her leadership and willingness to serve this university as acting president.”

Jones, who is on sabbatical, plans to return to the university as a business-school faculty member for the next academic year.

“The university was facing some difficulties, and [Glen] felt it was time to step aside,” Kneebone said.

Kneebone was born and raised in Arkadelphia. Her dad, Ed Martin, came to Henderson in 1967 and was a professor of art and chairman of the art department. He is now retired.

“I literally grew up on this campus,” she said.

Kneebone is the first female to be named president of the school. She said it is a tremendous honor to be selected.

“I didn’t really have time to think about it,” she said. “I have had some of our faculty and staff bring it to my attention as a point of pride for the women who work on this campus, and some people in the community have pointed it out as well.”

Kneebone said working in education was a surprise career turn for her.

“The first thing I wanted to do [as interim president] is to reassure our campus community, as well as the wider community in Arkadelphia, that Henderson is here now and will move forward into the future,” Kneebone said. “We know this institution has faced challenges in its 129-year history, and we will get through this challenge this time as well.

“The only way to do that is to communicate better so that everyone understands the situation, and we can work together to address the issues that we have.”

Kneebone graduated from Arkadelphia High School in 1993 and earned her bachelor’s degree from Henderson State in 1997. She went to law school at the University of Arkansas at Fayetteville and graduated in 2001. She was practicing at the McMillan, McCorkle & Curry law firm in Arkadelphia before she was hired to serve as the university general counsel in 2010.

Tom Curry, a partner at the law firm, has known Kneebone since she was a senior at the high school. Curry coached the mock trial team at Arkadelphia, and the two worked together at the firm.

“I’m a Henderson alum, and when I got the message that she was acting president, I was thrilled,” he said. “She is one of the smartest people I have ever known, and she is a very hard worker. It gave me a lot of confidence that Henderson is going to be in good hands while they go through the search for a permanent president.”

He said that when Kneebone was in high school, she was the person he bet on who would go to law school and become a lawyer.

“She was just a natural,” he said. “She worked really hard and did a bang-up job then. I knew she needed to go to law school because she is good at it.”

He said the firm hated to see her go.

“She lives and breathes Henderson, so when the opportunity came up for her to go there, there is no place she’d rather be,” he said. “I grew up here, and I have been around Henderson and Ouachita people my whole life.

“I have never seen anyone as committed to the institution as Elaine has always been. She bleeds red and gray. She is a Reddie.”

Kneebone came on staff at Henderson when former President Charles Dunn offered her the job as interim general counsel for the last six months of his presidency, and she enjoyed serving the campus and the people, she said.

“When you practice as a lawyer on a college campus, you get to do a wide variety of things and all kinds of work,” Kneebone said. “You get to solve all kinds of problems and work with very smart people all day long — it is a great career.

“At the end of the day, everyone is trying to help students make a better life for themselves, even on the very worst day. We are part of something that is making lives better, communities better and, ultimately, the world better.”

She said that as the attorney for the university, she usually works directly with the president and vice president of the college, but also works closely with deans and faculty members as well, on “whatever legal issues are facing the university, or on understanding certain policies, or helping them deal with difficult situations or problems. You get to learn a lot about how the university functions as a whole, and you get to meet a lot of the people who work here.

“That’s been pretty helpful for me, stepping into this role as acting president.”

She said that as the acting president, one of the things she wants to do is make sure the university’s expenses are aligned with its revenues “so we have a budget that balances, and we make decisions that are aligned with what the university is teaching and learning,” Kneebone said. “We want to continue to serve the state of Arkansas in educating the next generation of pilots, teachers and nurses — all the things that we have done so well for so many years.”

$4 million-plus deficit for the past school year, and “students owe the university about

Curry said he hasn’t talked to Kneebone about the possibility of her taking on the presidency in a permanent role, but he said, “I think that would be a good decision for Henderson.”

“I don’t want to speak for her, but as an alumni, I think that would be great,” he said. “I can’t imagine Henderson could have done better [than naming her as interim president]. I’m concerned about what’s going on at the school, and when I saw she was appointed, I felt a lot better.”

Kneebone said the board of trustees has not set a timeline for the hiring of a permanent president.

“What I told them is that I am willing to serve as long as they need me to serve,” she said, “but in terms of me wanting to stay in this role, I am taking it day by day.”

She said whoever is hired as president needs to know that Henderson is a place of history and traditions.

“This school has meant a lot to people throughout the years,” she said. “One of the things I got to do this year was deliver the Pine Tree speech, which has been given to our freshmen since 1916.

“It is the most traditional and old-school thing that we do, and it still resonates today. … This place has spirit and soul that I think make it unique.”