Oft-forgotten city stands in the shadow of other Georgia locales but shouldn't by Mary Ann Anderson Tribune News Service | September 8, 2019 at 2:17 a.m. 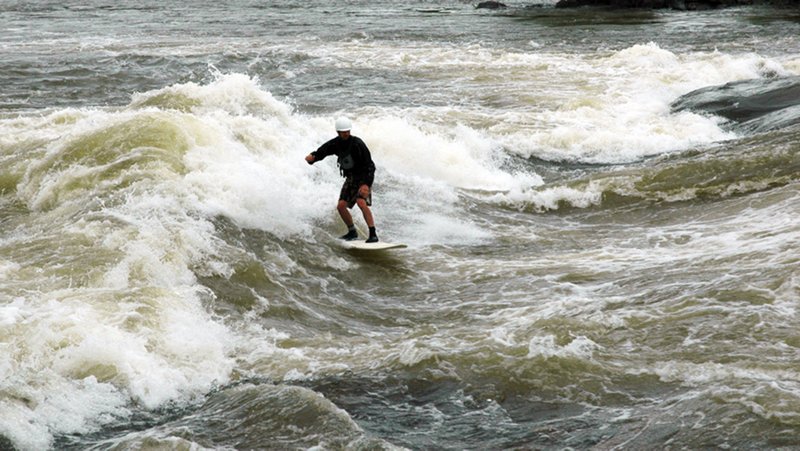 The adventurous can surf in Columbus without the benefit of ocean waves. Wave Shaper Island creates the waves and are a part of the 2.5 mile whitewater course on the Chattahoochee River. (Visit Columbus/TNS)

Columbus, on the far western side of Georgia, isn't near an ocean, a sea or even the Gulf of Mexico. So, then, you might think it odd to see a tanned surfer dude — or maybe a surfer chick — strolling around downtown with a surfboard under one arm and a wetsuit under the other.

That's because Columbus, the second-largest city in Georgia after Atlanta, is anchored by the Chattahoochee River, the dividing line between the Peach State and Alabama. Columbus is so close to Alabama that you can throw a rock across the river and hit a Crimson Tide or Auburn fan.

On the river, you can actually go whitewater rafting and surfing right past downtown and all of its historic buildings. Yes, surfing, as in surf's up. River surfing, it's called. The Chattahoochee has the longest urban whitewater rafting course in the world — you can shoot the 'Hooch for about 2.5 miles — with a pocket of the rapids providing the perfect opportunity for pretty decent surfing.

While river surfing on the 'Hooch may not quite be the caliber of, say, Oahu or Malibu, at least you don't have to worry about a great white making you its ichthyological entree.

And if you dare, you can even zipline across the Chattahoochee from Georgia to Alabama and back again on the Blue Heron Zip Line, named for one of the river's most famous denizens that congregate among its rocks and shallows, the stately blue heron.

"It's the only place in the U.S. where you can zipline from state to state," pointed out Shelby Guest of the very modern, very snazzy Visit Columbus Welcome Center, where I stopped to load up on brochures.

Here's the thing about Columbus and its downtown, especially if you've explored Atlanta and Savannah but still want to see a different facet of Georgia. Columbus may well be the coolest cat in Georgia at the moment. The core of Columbus is history and can best be described as having all the architecture, museums, attractions and captivating array of restaurants of its Peach State cousins but without Atlanta's notorious traffic and Savannah's even more notorious gnats and humidity.

"Columbus has one of the largest contiguous historic districts in the U.S.," Guest said as she pointed out sites on a map. "It goes on for 28 blocks and has lots of antebellum architecture."

Very long story short. Columbus, once the site of a Creek Indian village before the Creek and Cherokee were, um, er, forced out of Georgia in the infamous Trail of Tears. It was established in 1828 as a frontier trading post, primarily for King Cotton, with the Chattahoochee as its focal point. The Civil War came and went, and then Reconstruction brought textile mills, and a little later Coca-Cola fizzed up, its formula the creation of Dr. John Pemberton of Columbus.

Then World War I came to Camp Benning, named after Confederate Gen. Henry Benning, and which would metamorphose into the U.S. Army's Fort Benning, which has trained untold thousands of soldiers, including the likes of Omar Bradley, Colin Powell, George S. Patton and Dwight Eisenhower. Then World War II and the civil rights movement happened, and most recently a renaissance of downtown that managed to put Columbus on cuisine and cultural maps.

The history of Columbus is told through the Columbus Museum, the second-largest museum in Georgia and with a focus toward the Chattahoochee River Valley. Two museums are just on the edge of downtown, the National Infantry Museum and the National Civil War Naval Museum, where you can plan to spend at least a day seeing both.

Whether you have kids or no kids, the Coca-Cola Space Science Center is filled with NASA artifacts from the space shuttle program, with its cool-cat centerpiece of a space shuttle main engine nozzle that has flown into space on nine NASA missions. The Lunchbox Museum, the world's largest collection of lunchboxes, is also in Columbus, and for those of — ahem! — a certain age is guaranteed to spark a sense of nostalgia. 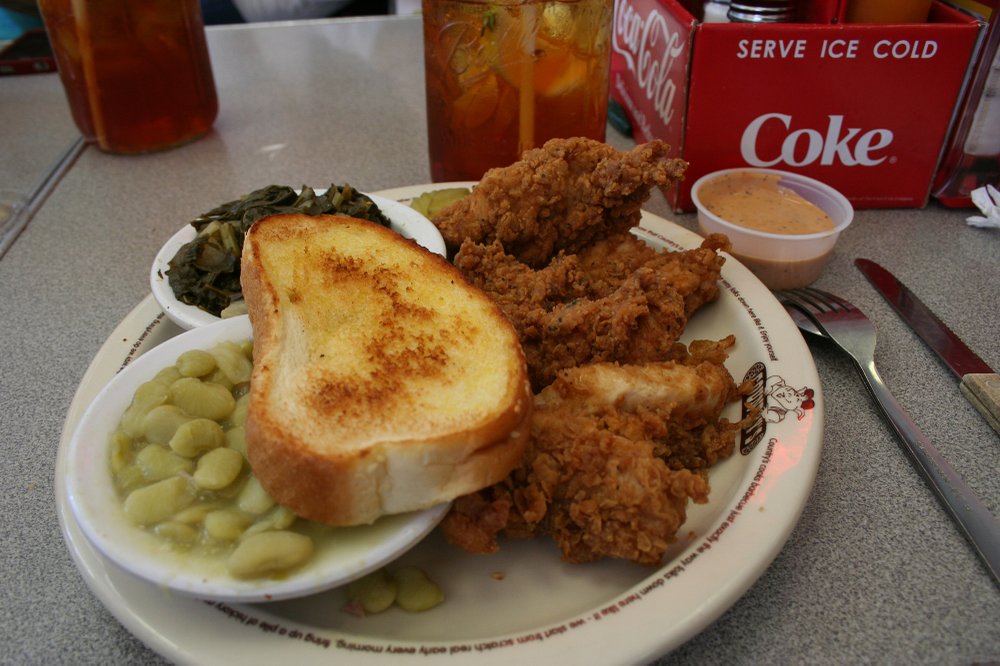 Country's on Broad, a former bus station, has been a downtown restaurant since 1975 and is known for its comfort food of barbecue, ribs and chicken. (Mary Ann Anderson/TNS)

I'll start with a really, really casual restaurant, and that would be Country's on Broad. A former Greyhound bus station — a vintage bus is part of its decor — Country's has been serving Columbus comfort food of ribs, barbecue and chicken for decades. Just about everybody loves its banana pudding in a jar, but its made-from-scratch lemon pie was recently named to Georgia's prestigious "100 Plates Locals Love" for 2019.

The macaroni and cheese at Minnie's Uptown Restaurant, a meat 'n' three that may very well serve the best fried chicken in all of Columbus, also made the "100 Plates Locals Love" a few years back.

For a casual restaurant, mosey on over to Smoke Bourbon and BBQ where the brisket is as fine as any you would find west of the Mississippi and the barbecue as slow-cooked and sweet as any in the entire state of Georgia. Start with the appetizer of pimento cheese wontons, though, before moving to Smoke's rooftop patio to sip some mighty fine bourbon.

A step up from casual is trendy. Saltcellar is the third in a sisterhood of locally owned upscale restaurants that include the long-established The Loft and Mabella. At Saltcellar, snack on crispy chickpeas seasoned with Spanish paprika before moving on to an appetizer of chilled smoked shrimp in strawberry cocktail sauce. Entrees include chicken, steak and grilled seafood that changes seasonally.

For an extra-special dinner, the choice is EPIC Restaurant. EPIC has tons of accolades, but being the recipient of Wine Spectator's "Award of Excellence" and the AAA Four-Diamond Award tells you the menu is outstanding. The highlight is probably Chef Jamie Keating's Chef's Table, an eight-course tasting event that some would call, well, epic, and which takes place, appropriately so, in the kitchen. The courses, as well as the regular menu, change with what's locally and seasonally available but expect anything from lobster and bison to kangaroo.

No matter where you dine for lunch or dinner, sweet dreams are made at The Loft, and that's where you should go for dessert. Its sweet treats are huge. The confections are amazing. Four of us at one table shared two desserts, a rich carrot cake and a slice of strawberry cheesecake, and we still had leftovers. 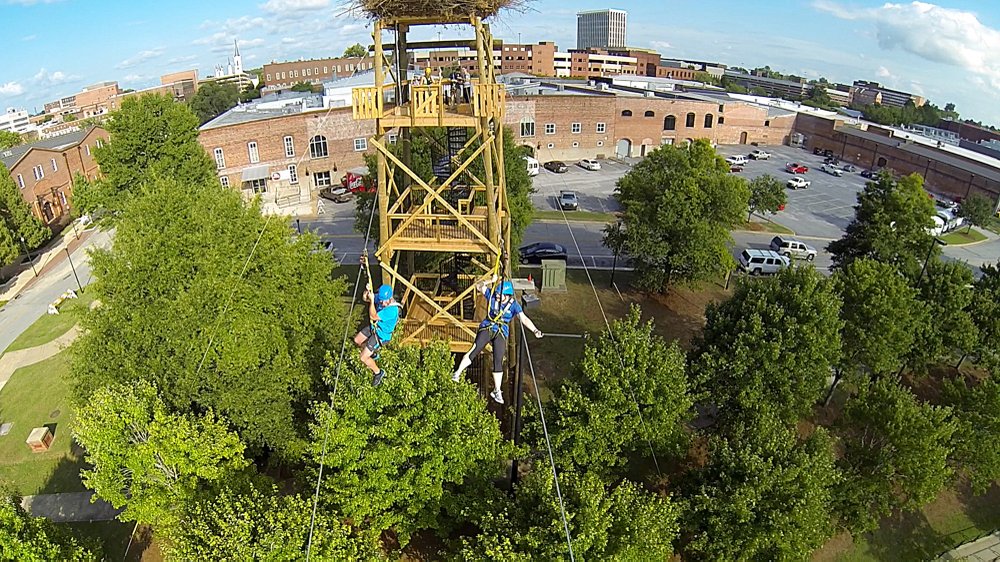 The Chattahoochee River in Columbus is the only place in the U.S. where you can zipline from state to state between Georgia and Alabama and back again. (Visit Columbus/TNS)

The 22-mile Chattahoochee RiverWalk meanders past downtown. Take the little ones to play in its splash pad while you relax in its many green spaces. Or you can just bike or walk the RiverWalk and enjoy the blue herons and other birds soaring above the river.

"It's natural and quiet, even though parts of it run close to uptown's entertainment district," said Guest.

Although I didn't stay there, Guest said I should see the Rothschild Pound House, the only bed-and-breakfast in the historic district. She said Bruce Willis had stayed at the inn when he was making The Long Night, and portions of We Were Soldiers, The Fighting Temptations and The Green Berets were filmed in Columbus.

Fan of the blues? Snap a photo of Gertrude Pridgett Rainey's home. That's Ma Rainey to most of us, the Mother of the Blues, who was born in Columbus in 1886.

Do take the time to check which performances are at the Springer Opera House, a National Historic Landmark and the official state theater of Georgia, as well as the RiverCenter for the Performing Arts.

"We do a variety of national Broadway touring productions," says RiverCenter's Norman Easterbrook, its executive director. "We're getting Cats before the Fox Theater in Atlanta gets it. What that means is the quality in Columbus at this particular theater is quite extraordinary."

One of the last cool cat things about pedestrian- and bicycle-friendly Columbus, including its uptown, downtown, and all around, is that it's also car-friendly. Parking is free everywhere, even parking garages, and that's all day, all night, all the time. By the river, by a restaurant, by the historic district or by anywhere, there's nary a parking meter to be found. That means two things to not worry about in Columbus, parking tickets and great white sharks.

Columbus is 90 miles southwest of Atlanta. Delta Air Lines serves Columbus (CSG). Downtown is 3 miles from CSG. For more information, visit visitcolumbusga.com or call (800) 999-1613. The Visitor Center at 900 Front Avenue is a must-visit for comprehensive information about Columbus.

An AAA Four-Diamond Award inn with main house rooms and cottages in the historic district of Columbus. Rates from $165-$320 per night per room include continental breakfast.

Originally constructed as a mid-19th century cotton mill. This historic hotel is within walking distance of all downtown Columbus restaurants and attractions. Rates from $141 per night do not include breakfast.