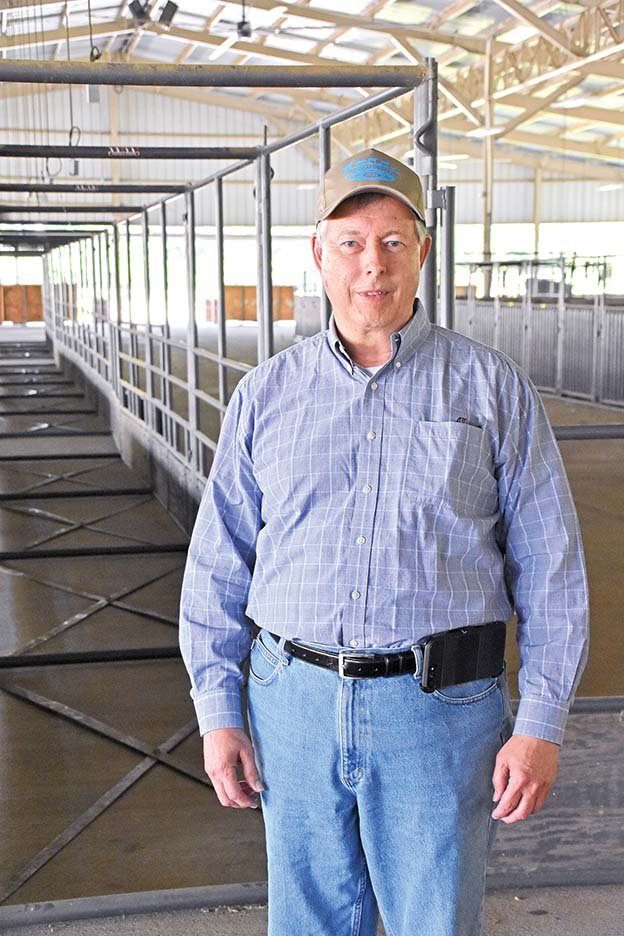 David Henze stands in the livestock barn at the Conway Expo Center and Fairgrounds. Henze grew up a couple of blocks from the former Faulkner County Fairgrounds on South German Lane. He helped write bylaws in 2007 for a new fair board and became its chairman in 2008. The 81st Faulkner County Fair is scheduled for Sept. 17-21. ( Staci Vandagriff)

David Henze grew up in Conway on South German Lane, two blocks from a longtime site of the Faulkner County Fairgrounds.

Even though he and the fair have both moved, he’s closer to it than ever.

Henze helped write the bylaws in 2007 for a new Faulkner County Fair and Livestock Board and has been its chairman since 2008.

The 81st Faulkner County Fair is set for Sept. 17-21, and he said that unlike in some counties, the fair is still going strong. The fair will kick off with a parade at 5 p.m. Sept. 17.

“We have what is arguably the biggest parade in Arkansas, from what we have heard,” he said. This year’s theme is “Lego to the Faulkner County Fair!”

“It’s a good community event, and really, although it’s hard work — we start working the month after the current one ends, in October — it’s a spot you see people you don’t see but once a year,” Henze said.

“This whole thing is for the community, not for [the fair board]. A lot of us are out there till 1, 2 in the morning and back out there the next day.”

Henze, who will be 68 on Sept. 20, graduated from St. Joseph Catholic High School and the University of Central Arkansas in Conway, where he was a member of the Sigma Tau Gamma fraternity. He earned a Bachelor of Science degree in political science and went to law school in Fayetteville for a year before he got disillusioned with it. He compared his experience to the movie The Paper Chase, which featured a stern professor and stressed-out law students.

“It was a whole complete different way of teaching from college. There was one test a semester, and that was the final,” Henze said.

He came back to Conway and went to work as a district underwriter manager for the Farm Bureau in Little Rock but then heard that Acxiom was hiring. He spent 28-plus years as a sales executive/consultant for the company and said he enjoyed the traveling.

“I got to go to places I never dreamed about going,” he said.

He recalled a trip to New York City, where he sat in the “oak-paneled private dining room of Newsweek on Seventh Avenue overlooking Central Park,” meeting with the magazine’s circulation employees and thinking how surreal it was.

“I’d never been able to do that if I’d followed through and become a lawyer,” Henze said.

A member of St. Joseph Catholic Church, Henze had volunteered at the fair, calling bingo at the Knights of Columbus booth, before getting involved on the reorganized fair board.

When he was still living on South German Lane, Henze saw a public-

notice sign posted on the fairgrounds on Robins Street and South German Lane that a public meeting was being held to discuss the future of the fair and its growth. The fair had been at that site since 1946.

The Young Business Men’s Association owned the 40-acre site and ran the fair for years, but the board decided to retire from serving and gave the property to the city. The city used the property to build a baseball park, College Station Park.

A meeting was held in spring 2007 to write the by-laws and form a new board.

“I said, ‘Well, heck, this might be interesting,’” Henze said.

He helped write the bylaws and became the chairman in 2008. The new board shadowed the former YBMA board for 2008-09 and took it over in 2010. That’s when the Conway Exposition Center and Fairgrounds was built at 2505 Oak St.

The nonprofit organization is officially the Faulkner County Fair and Livestock Exposition Inc.

The fair had room to grow in its new location. It has rides, of course. Swyear Amusements of Illinois has been used for 20-something years, Henze said, adding that inspectors have told him, “It’s one of the top-three safest fairs in Arkansas.”

He said the “tamer rides” are open for a couple of hours for residents of the Conway Human Development Center to enjoy for free.

The fair includes fried foods that festivalgoers expect and live music, as well as a dog show, a beauty pageant, special exhibits such as a white tiger, which will be back this year, and the Arkansas ArtMobile. Henze saw the artmobile at the Arkansas State Fair a few years ago.

The livestock show is a huge part of the fair and mainly has small animals, goats, chickens and rabbits, and some cattle.

“There wouldn’t be a livestock show without the 4-H and FFA kids,” Henze said. “Just to see the look on the faces of the kids who show their animals the week of the fair — the intensity and effort they put into it are the same as when you go to a high school sporting event.”

Children in day cares get a special time to see the animals.

“That’s the first time a lot of these kids have seen a cow, a chicken or a pig. That’s part of the [fair board’s] mission — education,” he said.

Henze said he never showed animals at the fair when he was growing up, but in his 20s, he entered a pumpkin that he grew in his parents’ garden.

“I mean, it was huge,” he said, holding his hands wide apart. “It got second place.” He recalled that he received a prize check for 75 cents.

“I never have understood why mine didn’t win. It wasn’t perfect; one side wasn’t completely in a shape of a pumpkin,” because of where it had been on the ground. “It was a beautiful pumpkin.”

He said the crafts and exhibit area of the fair sometimes gets overlooked, but it’s integral, too. It’s organized by the Faulkner County Extension Office and includes canning, quilts, photography, and arts and crafts of all kinds.

“Last year, we gave out $22,000 in prizes to participants in the livestock showing and home economics,” he said.

About five years ago, members of the fair board decided to give scholarships to graduating high school seniors in public, private or home schools. This year, the board gave $5,000, but it’s been as much as $9,000, depending on the number of applicants.

Proceeds from the fair are used to improve the facilities, he said, including investing $80,000-plus in big fans for the livestock barn. The state of Arkansas gives “a little [money] toward prizes” and every other year, the state kicks in some funds for fairground structures, Henze said.

The fair keeps two years’ worth of expenses in the bank, just in case of a rainout.

“Last year, we spent $15,000 more than we made. We had a complete rainout on Saturday. That’s why we put reserves in there.”

A two-year rainout occurred at the former fairgrounds, he said, and the YBMA didn’t have reserves.

“They had 40 acres in collateral; we don’t own anything,” he said.

He said the YBMA did a good job of keeping the fair going. He said the Conway Parks and Recreation Department and Faulkner County government leaders “are all supportive and help us in various ways.”

“The board couldn’t put the fair on without the help of all the volunteers, 4-H leaders, ag teachers, moms and dads. The Faulkner County Extension agents help with livestock, too, and wherever we need them,” he said.

Rick Sublett, vice chairman of the board and parade superintendent, had high praise for Henze’s leadership.

“He does a professional job; he goes above and beyond to make it a good fair and to manage it so we can carry it on year after year, as far as watching the finances, being frugal with what we do. He’s just a good manager,” Sublett said. “He cares a lot about the fair and what it stands for, as far as helping kids in the county.”

Henze believes the fair is more than frivolous fun. That’s why he continues to serve as chairman of the board.

“I think it’s important to the whole community, the whole county,” he said. “It’s basically a civic organization. It’s been going on 81 years; I don’t want to be the person to let it flounder. We look at it as a community event to nurture, grow and carry into the future.”

And chances are, he’ll be there all the way.