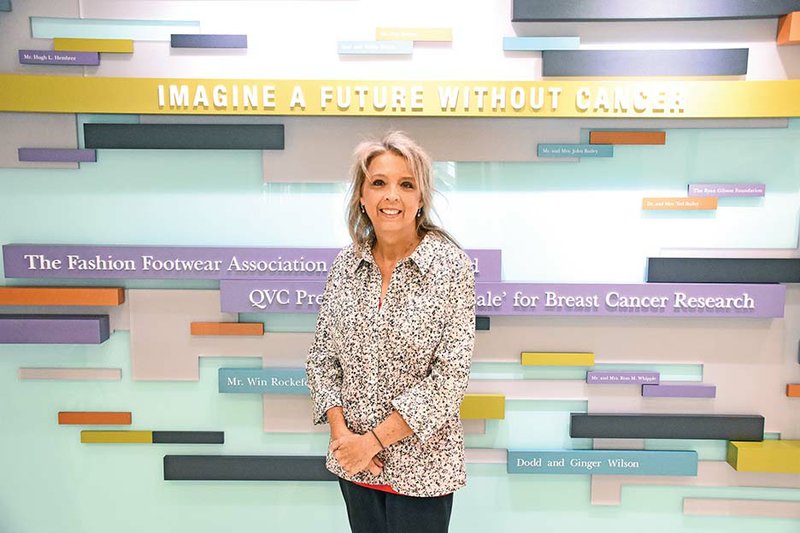 Lisa Garner of Conway, shown at the University of Arkansas for Medical Sciences in Little Rock, said her doctors are pleased with the results of her kidney transplant at the UAMS Medical Center in August. She had another transplant 12 years ago, but she went into kidney failure. Garner received a cadaver kidney. “I am eternally, eternally grateful for that donor and that family,” she said. ( Staci Vandagriff)

CONWAY — Lisa Garner said she got her life back Aug. 20, the day she got a new kidney.

“It’s like daylight and dark,” she said of her energy a week to the day after undergoing an almost five-hour surgery.

It was the second kidney transplant for Garner, 51, of Conway.

She has Alport syndrome, a genetic condition that causes kidney disease and other health problems, including deafness. She is deaf in one ear.

The married mother of three underwent a transplant 12 years ago on her left kidney, but she went into kidney failure in October 2018. Garner has been undergoing dialysis three times a week, four hours at a time without getting up, while waiting for a right kidney.

Dialysis is exhausting, expensive — and “it’s barbaric,” she said.

Garner was a busy real estate agent in North Little Rock when she underwent her first kidney transplant. Her husband, David, was all set to donate a kidney to her, but at the last minute, his kidney was deemed not to be a match.

Both of them were devastated, but a homebuilder’s wife heard of her need and was a perfect match, Garner said.

Her first kidney transplant was supposed to last from 12 to 30 years, and she got 12 years.

“A transplant’s not a cure; it’s a treatment,” Garner said.

Since she went into kidney failure a year ago, Garner has been on the University of Arkansas for Medical Sciences list for a cadaver kidney, although she could have accepted a kidney from a living donor.

Garner got the long-awaited phone call from UAMS at 11:30 p.m. Aug. 19. Because she has gotten so many false alarms — going to the hospital only to find out the kidney wasn’t viable — she was a little nonchalant when she got the call.

Still, Garner said she told her husband she’d go to the hospital by herself, and for him to stay and take their 16-year-old son, Cole, to school.

By 9 a.m. Aug. 20, the medical-center team said the kidney transplant was a go, so she called her husband and told him to come to the hospital.

She said the kidney came from a cadaver, but that’s all she knows.

“I am eternally, eternally grateful for that donor and that family,” Garner said. She can find out in a year who donated the kidney, if the family agrees. “I can write them a letter, but they don’t have to respond.”

She said she felt better immediately after surgery.

“Oh, my gosh, yes. The next morning, I was sitting up in my chair, and I walked down the hallway. … You get color in your face. You go from ‘Ahh, I’m so tired I can’t open my eyes’ to instantly sitting up in the bed. It’s just crazy.”

The biggest difference in the second kidney transplant compared to the first is less pain, she said.

“I expected pain. I am sore, but no pain. That’s been the biggest surprise. I can get out of bed by myself. The first one, I couldn’t get out of bed,” she said.

The incision is larger this time, Garner said, because it was her right kidney, and there were more internal organs to work around than on the left side. However, she said, the use of glue to close the incision, rather than staples, is a big advancement.

She went back to the doctor Aug. 26 for blood work.

“They said, ‘I cannot believe your numbers.’ I was walking around like I’d had a kidney for years,”she said. “I hope this one lasts the rest of my life; I really do.”

It’s the first time in 10 months she hasn’t had a port somewhere on her body for dialysis, and she said that is a huge relief. Taking a shower without worrying about getting the port wet is a simple pleasure.

“I can’t wait to have enough energy to really savor the shower,” she said.

Despite her health challenges, Garner has remained a member of the Conway Noon Rotary Club, where she was named 2018-19 Rotarian of the Year. She was named a Paul Harris Fellow for District 6170 on June 22 at a conference in Hot Springs, but she was too sick to attend.

Garner also served as an assistant district governor, as well as district trainer.

The Rotary Club has held fundraisers to help defray her medical costs.

“She has waited a long time for that kidney, and dialysis didn’t go great,” Linck said. “She had a lot of difficulties from that, lots of trips to the hospital. … I think a lot of us were very, very worried about her, beyond just being sick. You could tell it was really taking a toll on her.

“The crazy part is, her spirits were extremely high the entire time. At least, that’s what she showed to us. … I was amazed at how positive and how thoughtful she was of others during that time.”

Garner is also passionate about her work to pass the Living

“The way FMLA (the Family Medical Leave Act) is written right now, it’s not going to protect somebody for going to give a kidney. They can’t guarantee your job,” Garner said.

Garner wants people to be aware of living kidney donations, too. It only takes a simple blood test to find out if a person is a match and is eligible to donate a kidney, she said. More information is available on the UAMS website, she said, or the American Association of Kidney Patients website, aakp.org.

She is a member of the association, which is celebrating its 50th anniversary. She was chairwoman of the National Patient Meeting, scheduled for Sept. 6 through today. in Washington, D.C. Garner said it was too soon after her transplant to attend.

“I’m sad,” she said. “I’m still on the board and actively involved. I just won’t physically be there.”

Garner said the days of missing events should be over.

“I’m not going to do anything too fast,” she said. “I went downhill so fast, I want to take some time and get me better — mentally, physically.”

Garner said her husband was the ultimate caregiver all these months.

“I applaud him; I feel like I can’t thank him enough,” she said. “His thing is, ‘I’m just glad you’re better.’ I just want to gain my life back. I feel like life left me behind, and I want to catch up.”

Garner said she and her husband used to enjoy activities such as kayaking, “and I haven’t been able to do that in a year.”

The couple, who were high school sweethearts, will celebrate their 33rd wedding anniversary Sept. 20.

“I feel like we’re getting his life back, too,” she said. “That’s truly in sickness and health.”