New director getting senior center up and running 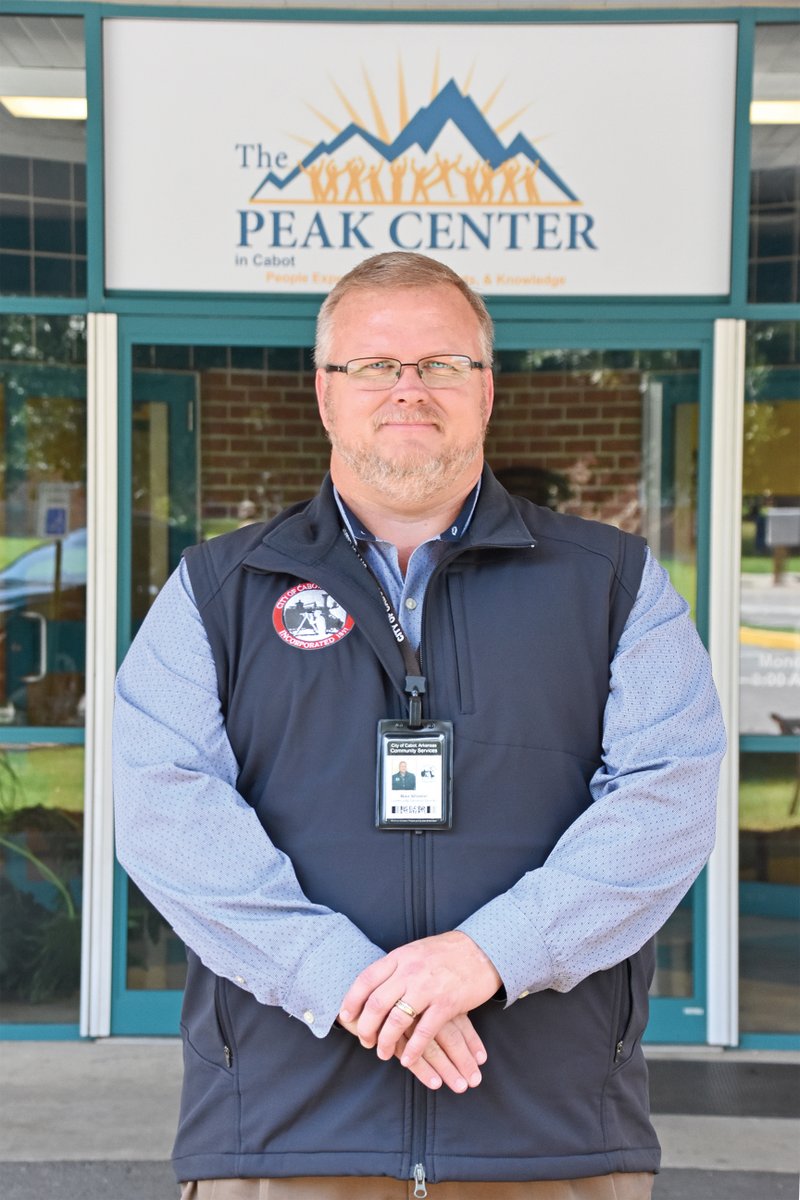 Mike Wheeler stands in front of the new Peak Center, which opened last week for the senior citizens of Cabot. Wheeler was recently named director of Community Services, which covers the Peak Center. He is still director of Cabot Animal Services. ( Staci Vandagriff)

Cabot Animal Services Director Mike Wheeler recently had a new title added to his duties with the city.

“This is a new department that the city created,” Wheeler said. “I’m still over animal control and animal services. I’m also in charge of senior services.”

Wheeler said the new job became necessary when the city canceled its contract with the Lonoke County Council on Aging to run the Cabot Senior Citizens Center.

“I’m definitely excited about this,” Wheeler said. “[Seniors] are an underserved part of the community. The previous senior center had only 18 to 25 people a day. That’s all that came through here. In a town of 25,000 to 30,000, we have a lot more seniors than that.”

Wheeler said the city notified the Lonoke County Council on Aging that Cabot would terminate the council’s services by Monday. He said it pulled out of Cabot on July 31.

“We’re looking at a way of looking at seniors,” Wheeler said. “I’m almost to that age myself. A lot of folks don’t like to be called seniors. We want to go out and make people feel that they are still alive and not just sitting in a room, playing cards and waiting for something else to happen. We’re going to get them active, get them out. We want to make sure they understand that they can feel 18 when they wake up in the morning. I feel that way. We need to respect that.”

The new Peak Center, which stands for people experiencing activities, arts and knowledge, opened Wednesday. The center is using its existing facility, along with the former Cabot Public Library building. The library moved across town a few years ago. Wheeler said the city has spent about $300,000 in renovations to the senior center over the past couple of years, including adding a full-service kitchen.

“We’re now going to cook there,” Wheeler said “Before, all meals were brought in from Lonoke. We also have a minimum of five programs a day for seniors that include basic stretching, Zumba, yoga and beanbag baseball. We will also have bingo. Everybody loves bingo.”

Additionally, Wheeler said, other classes will be offered.

“We’re going to bring in folks to talk about fraud,” he said. “We’ve been in contact with the Cabot post office to talk about mail fraud. We’ll also have some genealogy classes. They are packed up full.”

Wheeler said there will be day trips for the seniors.

Wheeler said anyone 50 or older is welcome at the center.

“We’re going to make sure if they need to have classes on the smartphone, we’re going to have them,” he said. “Whatever they want — and it’s their center — we’re going to find a way to provide that and make sure they are enjoying themselves.”

Wheeler said he thought the city would be further along with the building by now.

“We’ve had to put in a full kitchen, do some maintenance on the building and things that haven’t been taken care of,” he said. “It will take up to the very last minute to get everything done.”

“If Mike is in charge of a certain department, his passion for that department is uncontrollable,” Kincade said. “He will make it a point to make his department the best in the state of Arkansas. That’s the kind of director any CEO or mayor would love to have by his side.

“I am very lucky to have him on my team.”

Wheeler was born in Oklahoma but grew up in Cabot, graduating from Cabot High School in 1990. After graduation, he joined the Army.

“I didn’t know college was an option for me back then,” he said. “I was a decent student, but they didn’t have the facilities back then that they do now, such as great counselors. I didn’t think I had a choice. We didn’t have any money. I grew up with my grandparents. The military was my only option, or stay and go the route of some of the other folks I knew, and that wasn’t a great route to go.”

Wheeler was stationed in Colorado, where he met his wife. He worked as an intelligence analyst. He retired from the Army after 15 years, then worked as an insurance agent with his father-in-law before moving back to Cabot in 2008. That’s when he started working as an animal control officer for the city of Cabot. He was promoted to director of animal services in 2012.

“I thoroughly enjoyed my time in the Army,” Wheeler said. “I probably would have still been in the Army. My goal was to retire in the Army. I had that fatal flaw of being stationed in a group where there were no military people. I was with National Security Agency folks. That ruined me on re-enlisting. If I had been with military folks, I would have stayed.”

Wheeler said moving back to Cabot was the best decision he ever made.

“I moved back to Cabot for the schools for my kids,” he said. “My oldest was getting ready for high school. I have four kids, and I wanted to make sure they had a good leg up in life.”

Since moving back to Cabot, Wheeler has obtained three college degrees — an associate degree in criminal justice, a Bachelor of Business Administration degree in human resources and a master’s degree in public administration. All these came through Columbia Southern University.

“I’ve done it,” he said. “My kids are in college, and one is still in high school. I made a vow to them that if they finished college, I’d finish, too.”

He said he enjoys working in his hometown.

“We’re still small enough to be a hometown but large enough to have all the amenities we need,” Wheeler said. “I started out writing citations to people. When you have a conversation with people and you write them a citation because their dog is running loose, they shake your hand afterward and say ‘thank you’ because you kept their dog from getting it.

“That is what we have here, and it’s beautiful. There are a lot of places in Arkansas that have this. Cabot has that ‘everybody wants to help everybody’ mentality. That is why this has been such a blessing here. Everybody has come out in support of the Peak Center.”

Wheeler said the city hosted town-hall meetings regarding the center, and more than 100 people showed up.

“They were all in support of what we’re doing for the center,” he said. “I’ve got volunteers lined up to come help.”

While he has diverted his time from the animal-services side of his job while getting the Peak Center ready, things have still gone smoothly for Wheeler, he said.

“I have a great staff on the animal-services side,” he said. “They’ve taken on a burden there in my absence. It’s been good, and it’s exciting.”