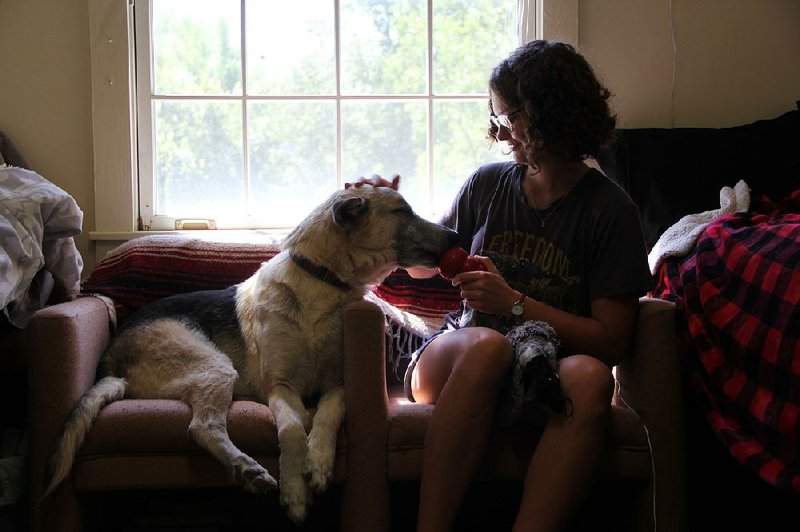 Shelby Medlock, 20, a junior at Lyon College, and Dirk, her German shepherd mix emotional-support dog, relax in her dormitory room. More photos are available at arkansasonline.com/98dogs/

BATESVILLE -- The dogs who attend Lyon College keep their owners on top of their schoolwork.

Heaven, a 10-year-old yellow Labrador, soothes Christen Johnson and her friends, who visit Heaven when they're feeling tense. She also makes sure Johnson, her 20-year-old companion, stays on schedule.

Heaven expects to play fetch every night at Schram Bark Park on campus. So Johnson has learned to stop taking on so many activities that she struggled to keep up with before Heaven arrived on campus.

"I feel like I was a lot more stressed before I got my dog on campus," Johnson said.

"But this year I have a dog, and so I can't overload myself," she added.

Johnson is one of 20 students who have taken their dogs or cats to campus this fall, a year since Lyon College announced that it had become the state's first campus to have a dog- and cat-friendly dormitory.

Several colleges and universities told the Arkansas Democrat-Gazette that they do not allow cats or dogs but allow fish, and several noted that as far as they knew, Lyon College allows only dogs and cats. Lyon also allows fish in 10-gallon tanks in any dormitory.

[Video not showing up above? Click here to watch » https://www.youtube.com/watch?v=JByZcVBwX4w]

Lyon has 15 emotional-support animals this year, said Patrick Mulick, vice president of student life and dean of students. The school had its first such animal only four or five years ago, he said.

Lyon College's uptick in emotional-support animals inspired school leaders to take that openness to pets one step further and turn the 25-room Bryan Hall into a dog- and cat-friendly zone.

Pets weren't just good for their owners. They increased socialization among students, many of whom introduced themselves to the pet owners when they asked to greet the pets.

This year, 21 pets are registered on campus -- 14 dogs, six cats and one hamster.

Lyon, a college of more than 600 students, modeled its policy after Eckerd College in St. Petersburg, Fla., one of the first in the nation to allow pets on campus. Eckerd took that step in 1973 after students petitioned for it.

Lyon allows student owners of dogs weighing less than 50 pounds to apply to have the pets on campus with them, regardless of the reason.

If approved, students must register their pet with the college's residence life office and pay $50 for each semester their pet lives on campus. Students must apply each year, even if their pets were approved the previous year.

The dogs and cats don't have to fill out paperwork, but they go through a quasi-interview process, Mulick said. Once school starts, a dog trainer meets with the students and their dogs to get a sense of whether the dogs are ready for college life. There's no guarantee a pet will be successful, Mulick said.

"So in that sense it's kind of trial and error," he said.

The pet program has become popular at Eckerd, said spokeswoman Robbyn Hopewell. The school even hosts a graduation ceremony for pets and a pet blessing in honor of St. Francis of Assisi, the patron saint of animals, every October. Dozens of pets attend each, Hopewell said.

Also, students who need emotional-support animals don't face any stigma associated with it. They don't stand out among hundreds of other students who have pets, said Jacob Browne, Eckerd College director of admissions. The college's pet policy also has attracted students to attend the college, he said.

About half of Eckerd students' pets are dogs and cats, Hopewell said, but the next-most-popular pet is a Florida staple -- 37 snakes were allowed on campus last year. That's because the school has an active herpetology club and a strong sciences program, Hopewell said. Lizards are also popular.

For Bryan Hall, Lyon College stuck with dogs and cats and limited pets that are not support animals, though the college may allow pets in other dormitories if more students' four-legged friends are approved than can fit in Bryan Hall. Pets that are not support animals can't go into classrooms, but they are free to roam outdoors, including in a dog park.

The park opened last year. It has two hoops -- one for bigger pups and another for smaller ones -- as well as a tunnel and a water fountain.

The college works to protect students who have allergies to pet dander, Mulick said, by placing them in pet-free dorm rooms.

All in all, dogs have had a positive effect on campus.

Dog owners say they meet a lot of new people through their pups. Students can be heard shouting pets' names across campus when they see them and waving hello.

Recently at the dog park, four women -- all juniors or higher -- said they knew one another mainly through their dogs.

"I feel like it helps you get to know people better," said Destiny Nunez, a 21-year-old senior who has a Great Pyrenees-golden retriever mix named Honey. She's an emotional-support dog.

"Hi, Honey!" a fellow student called as she walked past the dog park, waving. Nunez smiled, and Honey watched the student walk by.

Her emotional-support dog, Pitch, a Goldendoodle, likes to look out her dorm room window during the day. People recognize him from seeing him in the window and ask about him, she said.

Shelby Medlock, a 20-year-old junior, takes Dirk, her German shepherd mix and emotional-support dog, to the nearby lake and on the bike trail.

Medlock and Dirk share a dorm room with another student. Dirk has several toys stored under Medlock's bed, and he appears to be comfortable in the close quarters, where he can still perch on his pillow and sit on a love seat by the window.

She also takes him to other parts of campus and even took him to her on-campus job this summer.

"He likes to be with me all the time," she said.

Medlock likes having him around, too.

"It just relaxes me more," she said.