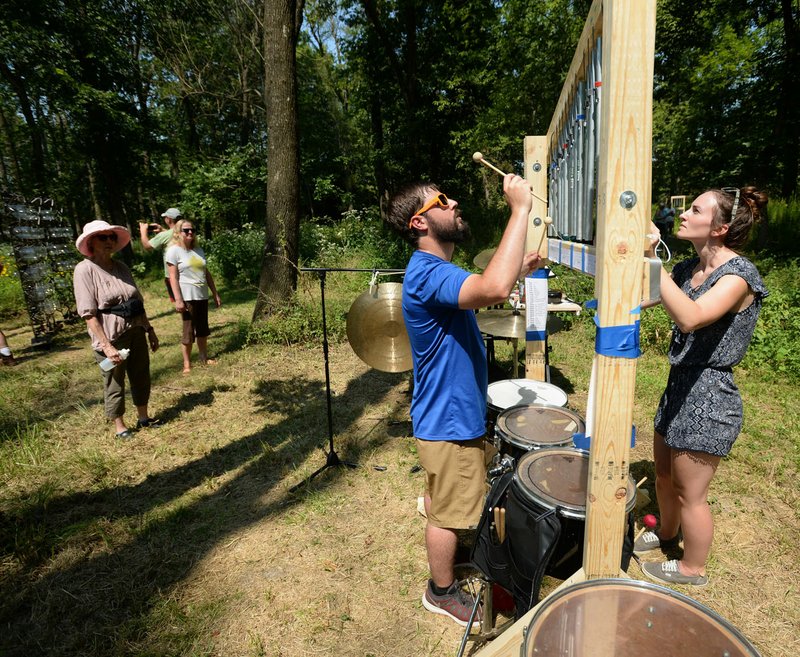 NWA Democrat-Gazette/ANDY SHUPE Chris Scherer (center) and Tanna Waltman (right), both musicians with the Fayetteville band Thought Form Collective, perform Saturday for visitors during a tour of the Wilson Springs Preserve in Fayetteville. The Northwest Arkansas Land Trust has been working for seven years to preserve and restore the 121-acre prairie wetland.

The 121-acre wetland preserve south of Sam's Club serves as home to a plethora of vegetation and wildlife. Rare species such as the Arkansas darter fish and Henslow sparrow live with deer, bobcats, coyotes, owls and ducks. Spring-fed streams converge to form Clabber Creek.

To get more information on Immerse: Wilson Springs as events are updated, go to nwalandtrust.org/immerseschedule.

The class will progress through the fundamental theory and movement-breathing of qigong. About a dozen different movements will be taught and practiced during the duration of the class. All movements will involve the standing position, no mats are needed. Comfortable apparel and shoes are recommended. Class limited to 24 participants.

This three-hour workshop led by Lela Besom and Virginia Hickman will give participants an opportunity to practice awareness, yoga, butoh dance techniques and creative movement exploration through deep listening to their bodies, their inner voice and the Wilson Springs environment. Class limited to 18 participants.

Poet Gwen Mauroner will lead participants through a 90-minute poetry writing workshop, focused on practicing deep observation of the place around them through the writing of odes. Odes, as a poetic form, describe their subject in detail, looking for hidden worth and praising the subject. Each participant in the workshop will be asked to write an ode about something found at Wilson Springs preserve. Poets will have a chance to read their works during the festival closing reception on Sept. 28. Class limited to 20 participants.

Herpetologist JD Willson will lead a small group through the preserve in search of the amphibians and reptiles making their home in the wetland. Hike is limited to 25 participants.

Participants can welcome the start of fall with a yoga session nestled among Craig Colorusso’s sunboxes installation.

Art created during the month will be on display at Fenix Fayetteville on the downtown square, alongside performances by select festival artists.

The flora has resprouted and grown in place of the non-native plants and trees depriving the streams and undergrowth of sunlight.

The transformation took seven years. Walls of privet and bush honeysuckle stifled the area's natural beauty. Volunteers with the Northwest Arkansas Land Trust removed the invasive overgrowth, both by hand and, sometimes, with heavy equipment requiring a contractor.

Work happened in chunks as grants came in from the Arkansas Game and Fish Commission and U.S. Fish and Wildlife Service.

"It's just a really magical, natural oasis in the middle of an urban matrix," she said.

The land trust decided a monthlong celebration is in order. The Immerse: Wilson Springs nature and arts festival kicked off Saturday.

"The performance, the music and the different art options being integrated with nature is been a really positive thing," Lane said, noting as many as 100 people attended the event.

Luciennahum Isaac of Fayetteville visited the wetland Saturday with his wife, Julie, and daughter, Alina, 16 months.

"My wife was looking for something fun to do today, and she's really into nature," Isaac said. "We thought it would be really neat to come and enjoy what's starting here."

Julie Isaac is a nature photographer, who took plenty of photos at the event.

"The profusion of yellow flowers is gorgeous," she said.

Isaac said the wetland is close to their home.

That sense of refreshment is precisely what Lane said she hoped visitors would discover at the event.

"Here's this preserve where you can find some peace and quiet and watch birds and butterflies," she said, noting the value of getting out of urban environments and out into nature. "There aren't a lot of opportunities like this that are so close that you can be immersed in nature and a special environment like a wetland," she said.

How we got here

The land trust acquired the property through a deed transfer from a charitable trust established by developer Collins Haynes and Audubon Arkansas in 2011. The county assessor removed a tax lien against the charitable trust because the property's deed restricted it from being used for commercial purposes. That action reduced the land's monetary value to virtually nothing.

Haynes in 2003 bought 289 acres from the city for $5.2 million, which included the 121 acres of the preserve and more land to the south. Audubon Arkansas originally was going to manage the site, Lane said.

Much of the land to the south became houses and car dealerships. Land to the northwest became Sam's Club in 2006.

Fran Alexander was part of a group of local activists dubbing themselves the Mudwamps who tried to get the city to preserve the entire acreage before the 2003 sale. It proved difficult because of politics and competing interests at the time, she said.

Plus, Alexander added, most people who drive by a wetland are likely to think of it as a weed patch or swamp. It can be a hard sell to galvanize support to preserve a wetland, as opposed to a mountain with hiking and biking trails, she said.

"These things are not aesthetically and emotionally appetizing to Johnny Public because they're not recreating in it, and they're not familiar with any of the scientific value of things like that," she said.

The most extensive areas of wetland in Arkansas lie along the major rivers running through the state, according to the Association of State Wetland Managers, a national nonprofit group promoting and enhancing protection and management of wetland resources. Other wetland is scattered throughout the state and is associated with springs and seeps in the Ouachita Mountains and Ozarks.

Fayetteville has two other wetland areas. The World Peace wetland prairie is about 2½ acres near South Duncan Avenue. The Woolsey wet prairie is a 44-acre restoration project adjoining the Westside Wastewater Treatment Facility near North Broyles Avenue and West Persimmon Street. It was meant to offset the 10 acres of wetland lost from the construction of the wastewater treatment plant, according to the city's website.

The Searles Prairie Natural Area in Rogers is a 12½-acre remnant of a 10,000-acre tallgrass prairie that once occupied part of the Springfield Plateau of the Ozarks around the city, according to the Arkansas Natural Heritage Commission. The area features a number of rare plant species and allows for environmental education.

A conservation project is under way in Bentonville near its municipal airport. Work includes improvements to Lake Bentonville and its park. North of the park is wetland. The wetland is privately owned, but will be known as Osage Park. The public will have access to the 55-acre area, said David Wright, parks and recreation director for the city. The dam at Lake Bentonville will come down, bringing more water over to the wetland area, he said.

"The goal is to make it a better habitat for the wildlife that's already there," he said.

Wilson Springs is the largest protected wetland in the region, Lane said. Aside from providing crucial habitat for wildlife, wetland serves as natural filtration systems for stormwater. It clears pollutants before they reach the waterways, and in this instance, Clabber Creek serves as a tributary of the Illinois River, she said. Pollinators also thrive in the area, as does milkweed, a nutrition source for butterflies.

Urban runoff flows right into Wilson Springs. The land trust has a mailing list of nearby homeowners to tell them about the best ways to keep from harming the area. The group recommends they reduce the use of pesticides and fertilizers, put in a rain garden, keep drainage ways vegetated and clean pet waste and leaves.

The land trust will continually monitor the water quality and flora and fauna, in addition to general upkeep and maintenance, Lane said.

Visitors to the Wilson Springs preserve can walk the mowed trails on the northern end of the property, take pictures, go birding and observe the wildlife. Recreation more intense than that would have a detrimental effect, Lane said. Dogs aren't allowed because of the danger of running into animals that live south of the trails, she said.

The idea was to encourage low-impact use. Hopefully the visitors will serve as stewards of the property, especially those who live close by, and report any misuse, Lane said.

"When you first start getting onto the property, you can hear the highway," she said. "But as you get in a little bit, that all melts away, and you really do feel immersed in nature. And that's what we want people to have access to."