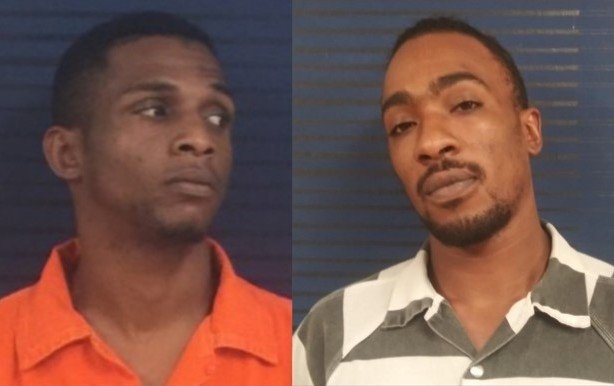 Jerry Marshall, 28, (left) and Nicholas Robinson, 27, (right) are accused of raping two teenagers after being involved in a shootout at a gas station, authorities said. Photos courtesy of Dallas County sheriff's office

Two Dallas County men arrested Friday are accused of raping two teenagers after being involved in a shootout at a gas station, authorities said.

Jerry Marshall, 28, and Nicholas Robinson, 27, both of Fordyce, are accused of using social media to lure two minors, 15 and 13, to meet them for sex, according to a news release by the Dallas County sheriff’s office.

Once Marshall and Robinson got the teens into their vehicle, they drove to a gas station and reportedly got in a shootout there with another party while the two minors took cover in the vehicle’s floorboards, authorities said. The shootout happened around August 9, authorities said.

The release doesn’t describe anyone receiving injuries from gunfire.

Authorities said the two men then drove their vehicle to a local motel, where they used drugs and kept the children over the course of two nights.

The teens received medical treatment and will receive “follow up services” from the Department of Human Services, the release states.

Marshall and Robinson were transported to the Dallas County jail, where they remained on Monday on $100,000 bonds, according to authorities.

Charges against the two include multiple counts of rape, internet stalking of a child, first-degree endangering the welfare of a minor and introducing a controlled substance into the body of another person, the release states.

Authorities said more arrests are expected in the case, though the release didn’t name any additional suspects.