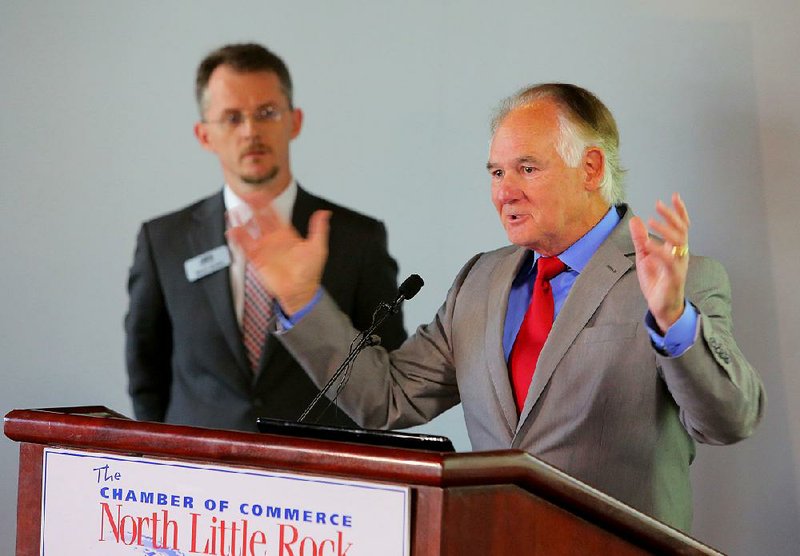 FILE – Terry Hartwick (right), president and CEO of the North Little Rock Chamber of Commerce, and Mitch Bettis announce the launch of the Arkansas Women’s Hall of Fame in North Little Rock in 2014. ( Stephen B. Thornton)

Terry Hartwick, North Little Rock's Parks and Recreation director and a former mayor, is easily spotted around the city, on the job and off, shaking hands and articulating his ideas for the city's parks and the city itself.

"I've got a vision," Hartwick said in an interview last week.

That vision includes wanting another chance as North Little Rock's mayor, a desire Hartwick, 70, hasn't kept quiet. A "Terry Hartwick for Mayor" page showed up on Facebook in late July and had 1,167 followers as of Friday morning.

That's even though Mayor Joe Smith -- Hartwick's boss as a city department head -- hasn't officially declared that he won't seek re-election next year.

"I'm sure his pat answer is going to be, if I run, he's not going to, that he's kind of wanting to test the waters," Smith said about Hartwick's early campaigning. "I don't have a problem with that until I make my mind up publicly."

As noted, Hartwick explained that his campaign jump onto social media is just that -- testing the political waters.

"I think that's what we've got to call it until the mayor says he's not running, publicly," Hartwick said, alluding to speculation that Smith, who turns 68 this month, doesn't plan to seek a third term. "I don't want to do anything publicly myself.

"It's more or less an exploratory thing," he said of the web page, which also includes an email address of Thartwick4mayor@gmail.com. "Wait to see what kind of response I'm getting.

"It's not a secret that I'm very interested in running," Hartwick said. "I think there are a lot of things the current administration has done and is doing that will carry forward to the next administration, and I'd like to be a part of it."

Smith, who hired Hartwick as city Parks director, starting Jan. 1, 2016, said he's known of Hartwick's intentions but would rather everyone wait until he publicly announces his own plans.

"He's a campaigner, no doubt," Smith said of Hartwick. "He wanted to start in June.

"The longer he holds off, the better it is," Smith said. "When he gears up, everybody is going to gear up."

Hartwick was North Little Rock's mayor from 1984 to 1988 but was rocked by an investigation of his acceptance of free vacations from contractors doing business with the city and by his publicized relationship with a University of Arkansas, Fayetteville, student and subsequent divorce in 1987. An ethics inquiry concluded Hartwick didn't violate any laws.

After leaving office, Hartwick became store manager at Haverty's Furniture and returned to the public eye when he was named executive director of the North Little Rock Chamber of Commerce in January 2001.

"I think the biggest thing that knocked me out of office was maybe my divorce," Hartwick said last week, dismissing "things that happened 30 years ago" from being an obstacle. "I think I was a pretty good mayor, overall."

"I'm smarter now," he said. "I've had a pretty good record for the last 32 years or so. When I took over the Chamber it had 288 members. When I left it was the third-largest chamber in the state with 1,500 to 1,600 members. At Parks, I'm proud of what we've done and I think people see the difference.

"I get the job done, that's what I'm trying to focus on," he said. "There are a lot more things I want to do."