Arkansas Department of Transportation plans '20 meetings to focus on benefits of 0.5% sales tax 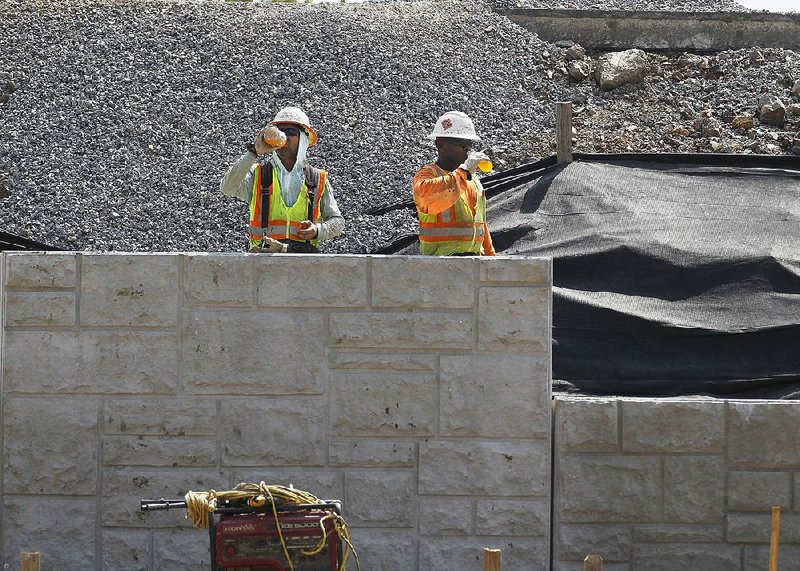 FILE — A pair of construction workers with Manhattan Road and Bridge sip on sports drinks while waiting to put another concrete barrier into place at the Rodney Parham exit on I-630 on Friday, Sept. 6, 2019, in Little Rock. ( Arkansas Democrat-Gazette / Thomas Metthe)

The Arkansas Department of Transportation will hold a dozen town hall-style meetings around the state early next year to tell potential voters what roads and bridges they will improve if voters approve extending the 0.5% sales tax in November 2020.

The department will also allow time for an "open-mic night" format in which people can provide comments or ask questions of state transportation officials about what projects the money raised -- an estimated $205 million annually -- would be spent.

Meanwhile, members of what will be the legislative question committee are meeting with potential political consultants to prepare a campaign to promote passage of the proposal, according to Shannon Newton, executive director of the Arkansas Trucking Association. The committee won't become a formal entity until it begins raising money, she said.

"At this point it is still a working group," Newton said in an interview last week. " There is no official paperwork, titles or names. I am participating in that effort, yes."

Bennett said the department's effort is modeled after previous outreach campaigns in 1998 and 2005 "for taking this out to the public and showing them what our proposal would be."

Under a preliminary schedule Bennett discussed at a meeting of the Arkansas Highway Commission last week, the town hall meetings would take place largely in January, February and March, before the Arkansas Legislature holds its fiscal session.

"This covers a good part of the state," Bennett said.

No venues have been confirmed, but Bennett said he hopes to hold them at night in locations that include a lobby where interested people can view map displays and talk one-on-one with state transportation officials. A more formal presentation would then be held in an auditorium or large room that would leave time for people to ask questions or make comments.

The department also will make presentations to local civic clubs and local chambers of commerce meetings.

The town-hall meetings would be in advance or in conjunction with the separate political campaign that would be mounted to persuade Arkansans to vote for the tax, Bennett said.

In her interview, Newton said she also expected little activity before the beginning of the new year.

"We are meeting with some campaign consultants this week, and I think we will have a better idea of the timeline after those meetings," she said. "It's not on the ballot at this point for another 17 months. I think generally speaking, voters are not tuned into the issues that are going to be on the ballot in November of 2020."

The campaign will parallel the department's education effort, Newton said.

"We will be working alongside them," she said. "They are the ones with the true expertise on projects and budgets. They can answer the specific questions and details about the issues in those communities.

"From the campaign side, you are going to see a more broad-based effort on what the state needs are from a more macro perspective and educating and trying to provide potential voters with the cover they are looking for, giving them assurances that there are real needs."

Newton said she sees the campaign for extension of the 0.5% increase in the state sales tax as part of Gov. Asa Hutchinson's overall effort to pass a program to improve highways in the last legislative session.

The first fruits of that effort take affect on Oct. 1, which include increases in the tax on gasoline and diesel.

Oct. 1 also will see increases in the registration fees on electric and hybrid vehicles and the transfer of at least $35 million annually in casino revenue and/or other funds to the Transportation Department.

All told, the tax and registration fee increase and transfers will raise an additional $95 million annually for the department, which under the proposal is required to spend the revenue on pavement preservation projects. Bennett told the commission last week he anticipates soon having a list of projects to which the money would go.

That money would be combined with the department's regular construction program, which relies on revenue largely from state fuel taxes and registration fees and its share of federal fuel taxes.

That would leave about $3 billion over 20 years to spend on a new Connecting Arkansas Program and focus on capital projects. Another $500 million would be set aside over that span for unanticipated congestion-relief projects, acquiring rights of way and relocating utilities.

"Our support has been for the plan as a whole and the half-cent has been a major component of that plan," Newton said. "We are continuing to see through this effort on the half-cent campaign as part of the plan we supported in the legislative session..."