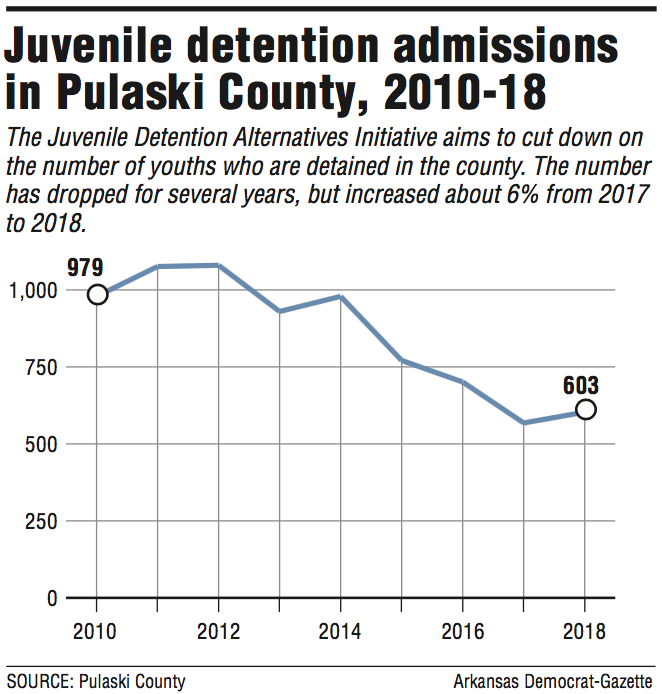 Dwindling participation and simmering political tensions have left a Pulaski County program that aims to decrease arrests and detentions of children teetering on the edge of demise.

Mistrust among the Juvenile Detention Alternatives Initiative members arose after the county's attempts to create a juvenile justice director position outside the courts. And squabbles about conclusions drawn from data mean members of the working group have been unable to approve expert-recommended policy.

At the Aug. 30 meeting of the initiative's working group, Juvenile Public Defender Dorcy Corbin motioned to dissolve the group. The motion failed because no one seconded it, but attendees said they left unsure of what the future holds for the initiative.

"I'm tired. I don't see a whole lot of progress being made," juvenile court Judge Joyce Warren said. "We come, dwindling down to just a few, and I'm going to say this: Judges cannot do it by ourselves. ... It is a collective group effort.

"It's hard to turn the ship around if you're just pushing with one finger."

Judge Wiley Branton said at the meeting that he wanted to take some time to think about Corbin's motion. 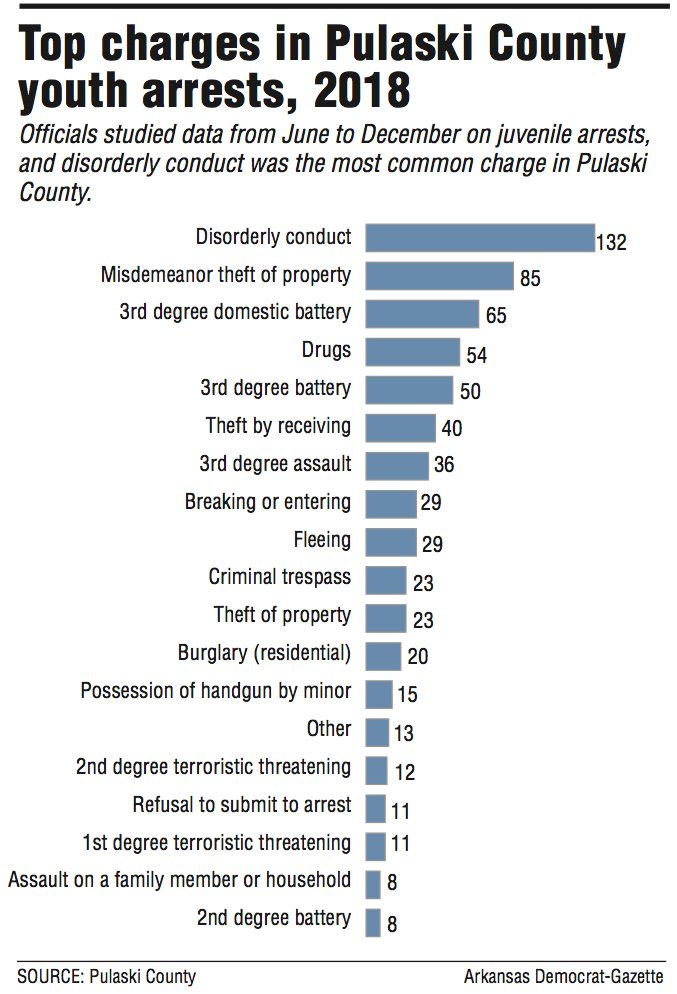 Pulaski County launched its initiative, which has eight core principles to improve outcomes for children in the juvenile justice system, in December 2017. It was the third site in Arkansas to begin such a program; the others were in Washington and Benton counties.

[NEWSLETTER: Sign up for the Week in Little Rock and Week in North Little Rock emails at arkansasonline.com/emails]

The Annie E. Casey Foundation, a national group that advocates for the well-being of children, founded the program in the early 1990s.

The eight core strategies are:

• Using risk-assessment tools to determine whether youths should be put into detention facilities.

• Expediting the flow of cases through the system.

• Reducing the number of children who are detained.

The program's working group has 21 members, but only four went to the Aug. 30 meeting. The groups that signed a memorandum of understanding to be a part of the initiative include law enforcement members, school districts, juvenile judges, the public defender's office and the prosecutor's office, among others.

Members who attended the August meeting said attendance has dwindled for months.

"Everyone who signed the MOU in the beginning needs to be there," Warren said in an interview. "I know people are busy, but after a while you just make a priority for something to happen."

Juvenile court Judge Patricia James was not at the Aug. 30 meeting and has rarely signed in for a meeting, according to documents. James was not available for comment Friday.

No school districts were represented at the August gathering, and only North Little Rock and Jacksonville police had attendees.

The three schools where the most arrests occurred from June to December 2018 -- McClellan High School, J.A. Fair High School and Hall High School -- are all in the Little Rock School District. McClellan had 52 arrests, J.A. Fair had 48 and Hall had 44 during the time period studied.

"Ms. [Lisa] Williams will continue her representation of the Little Rock School District with fidelity and enthusiasm," Frederick Fields, the district's director of student services, said in an emailed statement.

Williams has signed in for nearly every initiative meeting, according to sign-in sheets.

Fields added that because of the detentions initiative, district social workers had a meeting with intake officers in order to track students who needed services rather than detention.

The Little Rock Police Department arrested the most children over that 2018 period in Pulaski County, at 384. The next closest was Jacksonville, at 138.

Little Rock police representatives have signed in for about four meetings since the initiative began.

The lack of attendance, among other issues, has stalled the process of creating new policies, said Chastity Scifres, the chief deputy county attorney. Scifres analyzed county data on juvenile arrests and detentions.

"All three judges need to agree on a policy, and that hasn't happened to date," Scifres said.

Scifres said that because policies haven't been approved, the county is in danger of losing technical support from the Center for Children's Law and Policy.

"You have to translate that data into formal policy decisions," Scifres said.

Drew Shover, the chief probation officer in Benton County, said in an interview that collaboration was the most important piece in establishing an effective Juvenile Detention Alternatives Initiative.

"It's still growing. Our community couldn't be more engaged," Shover said. "You've got to drink the Kool-Aid."

Through the initiative, stakeholders have increased data collection and created more programs, such as equine therapy and mural painting, to help children who have gone through trauma, he said.

Shover said detentions have gone down and that officers are more focused on holistically helping families so children are going home to positive environments. Meeting attendance has increased from about eight people to more than 20 on average, he added.

Earlier this year, County Judge Barry Hyde tried to create a position in Pulaski County similar to Shover's that would be under the control of the county, rather than the district judges. The juvenile judges opposed the measure, and the Pulaski County Quorum Court voted it down.

But judges still said they need to meet with county staff members to clear the air and move forward.

"That really kind of threw a bucket of cold water on the process," Branton said. "I think it demoralized the juvenile intake and probation staff. ... That set us back a whole lot. Even though it was put to rest, I believe the issue will re-arise."

At least seven Arkansas counties have such a position.

Tuell said he supported the county position. The resource center conducted an assessment of Pulaski County's juvenile justice system that was published in 2016.

But Corbin said she thought that because the judges interact with probation officers regularly, it made more sense to leave the position in the control of the three judges.

"I think that no matter how competent one county judge may be, that doesn't mean the next county judge will be competent to supervise such a position," Corbin said. "The judges see the probation officers, they see the result of their work every day."

Both Warren and Branton said they didn't like or agree with the county's idea, but they hoped to move forward.

"Even though I have sort of dirt in my mouth ... I still continue to come back to the table," Branton said.

Warren said she also took issue with a presentation Scifres gave to the Quorum Court because she thought it painted an incomplete picture of the programs the court already has and the lack of transportation for children to get to county-created programs.

But Scifres said she was asked give a presentation on the county's work and didn't see a need to expand that presentation. She added that there are opportunities for youths to take the bus to programs.

Corbin said she disagreed with some of the conclusions drawn from the data, notably the need to shorten case-processing times. She said she thinks it could violate children's due-process rights.

Scifres said that was a legal gray area and that she wants to see the case-processing effort expedited.

Both said more efficiency could be positive for children, but they have differing ideas about doing that.

Tuell said it's not uncommon for jurisdictions to stop working on the initiative, adding that Pulaski County took on a lot of work at the start.

"They had broadened their scope, and unfortunately they've continued what I've seen as a troubling pattern in Arkansas, which is 'What we do is OK,'" he said.

Various people interviewed said they wanted to see a youth shelter established through the initiative, as well as fewer detentions and written-out policies.

As long as efforts are stalled, Tuell said, it's the children who suffer.

"I'm very concerned about how many kids we're leaving behind because of the current system," he said. "This is just an opportunity lost. There needs to be some significant leadership at the state level that realizes how far behind we are."

Scifres said the county can continue the program without the participation of other stakeholders and that it'll be considered if the working group disbands.

"We've got to get all the players back on the ship," Corbin said of the initiative. "We've got to clear out all the undertones, and people need to be open and honest."

CORRECTION: The Robert F. Kennedy National Resource Center for Juvenile Justice is a resource center. The center was incorrectly described as another type of organization in an earlier version of this article.