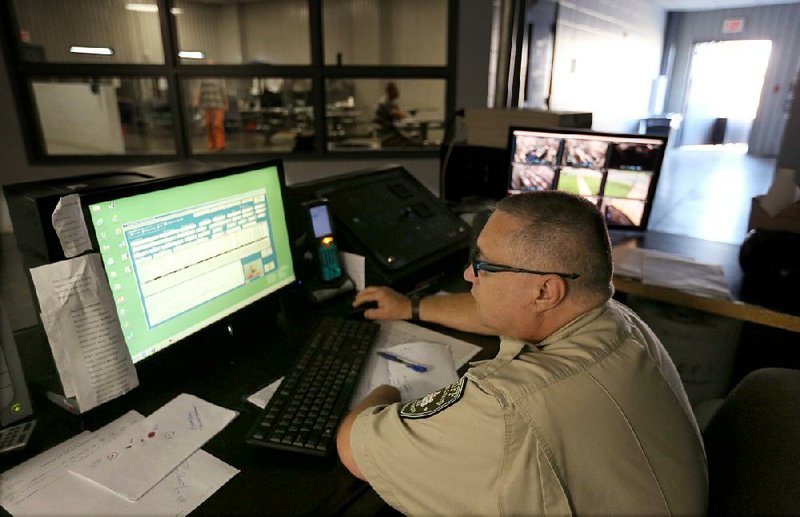 FAYETTEVILLE -- Justice of the Peace Ann Harbison said crowding at the Washington County jail is a crisis and the county needs to build more space now.

Harbison said the Quorum Court should consider asking voters March 1 to decide on a temporary solution for the situation. Harbison, whose District 14 covers much of the southern part of the county, is chairwoman of the Finance and Budget Committee.

She said adding jail space could require a sales tax increase or other funding method that would need voter approval. She asked county attorney Brian Lester to explore funding options, and Lester said he's working on her request.

Harbison said she might raise the idea when her committee meets Tuesday.

"The Jail Committee is not on the schedule to meet this month, so I don't know how we're going to do this unless I bring it up in finance," Harbison said. She said the recent murder in the jail prompted her to push the Quorum Court to take action.

Last year, Washington County Sheriff Tim Helder proposed a 600-bed expansion. The Quorum Court has asked for a study of the county's criminal justice system and for time to see if alternatives to incarceration can help reduce crowding.

The study hasn't begun. The county has advertised for proposals but hasn't chosen anyone to do the study.

Stan Adelman, a Fayetteville lawyer and law professor teaching in Oklahoma City, has been hired as an ombudsman for the jail. Adelman and a group of law students will review detainees and possibly recommend that some be released without bail or on lower bail amounts.

The county has also begun working with The Bail Project, a nonprofit group that assists detainees who cannot afford bail. The group helps detainees obtain release through a revolving bail fund and then provides support so those released can comply with the laws and make their way through the legal system.

Harbison said she doubts those efforts will be sufficient because the sheriff's office is already releasing nearly 200 detainees a month, and close to 100 prisoners are sleeping on the floor. Harbison said 200 more beds are needed as a short-term measure while discussing a long-term solution.

"We either need to do the expansion or we need to find the money for additional cells, for a Band-Aid fix," Harbison said. "Professor Adelman and this Bail Project may help, but I don't think it's going to succeed to the level of 200 prisoners a month, and that's what we need."

Helder said Harbison hadn't talked with him about her proposal or asked him for information. He said the county has a 96-bed facility used for the work release program and estimated a similar, but larger, minimum-security facility could be built for $2.5 million to $3 million. Helder said the cost to operate it would be considerable.

"You're looking at four shifts of five people each," Helder said. "That's about $1 million a year. Then you'd need another eight sergeants. That's about half a million dollars there. Utilities would be around $150,000 a year and food around $300,000 a year. You'd have medical expenses for that many prisoners of probably $250,000 a year. So, other than construction costs, you're looking at $2.2 million to $2.5 million annually."

The reaction of other justices of the peace ranged from support for Harbison's idea, to a willingness to listen, to outright opposition.

Eva Madison, justice of the peace for District 9 in Fayetteville, said she didn't think the idea should even be considered yet.

"I feel like the Jail Committee was pretty clear that it didn't want this to go on, didn't want this to go to the Quorum Court now," Madison said. "We're like a rudderless ship. We have no idea what we're doing. We make a decision and now a single JP wants to do something entirely different. I can understand why people get frustrated with politicians. I'm one of the politicians, and this frustrates me. At a minimum I think we have to give Professor Adelman and the study some time before we even think about an expansion."

Harvey Bowman, justice of the peace for District 3 in Springdale, said he too has been thinking about a short-term jail expansion.

"I would prefer not to do that," Bowman said. "But I think we're going to have to. We're at the point where we desperately need to do something."

Judith Yanez, justice of the peace for District 4 in Springdale, said she wants to give Adelman time to work and to see what the study of the criminal justice system might recommend. She said she wants to hear Harbison's proposal but will need lots of information to persuade her to support it.

"We have to look at all the available options and see if they're viable options," Yanez said. "None of us are experts, and we need to see what the experts recommend. We have to decide if [Harbison's proposal] would be beneficial, or would we be wasting money doing that. We have to be sure we're not going to be in this same situation in a couple of years."

Patrick Deakins, justice of the peace for District 5 in northeastern Washington County, said he's not ready to consider Harbison's proposal. Deakins said the county needs to consider possible alternatives before asking voters to increase taxes for a bigger jail.

Deakins said he sees Harbison's proposal as an example of inefficiency in government.

"I feel like we've committed ourselves to this grand plan of doing the study and hiring the ombudsman and giving them time to work," he said. "Then somebody goes rogue cowboy and threatens to derail us."