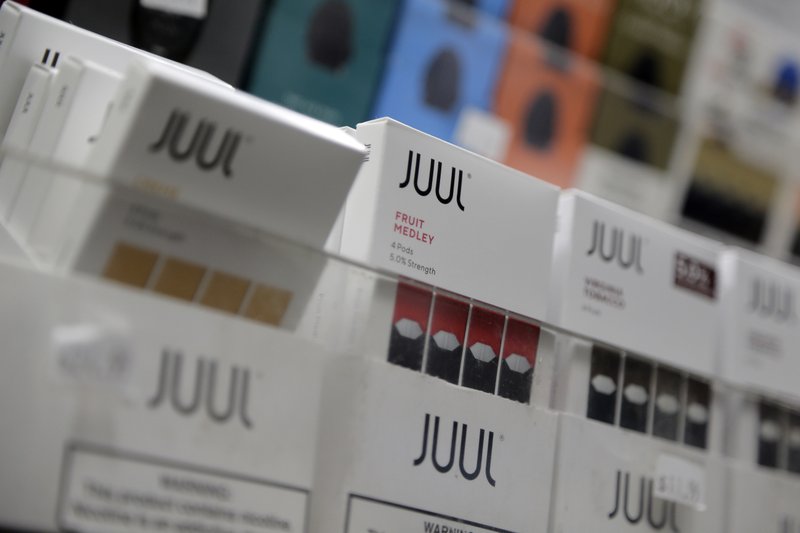 Some state lawmakers' resistance toward taxing and further regulating electronic cigarettes is changing after the recent public health outcry over the products, the leader of the Senate said Monday.

Legislators on Monday began considering how to address e-cigarette use, commonly called vaping, as the House and Senate Public Health, Welfare, and Labor committees heard from two doctors and a public school superintendent about the rising use, particularly among minors.

The witnesses offered a handful of public policy solutions, such as raising taxes on the products and tightening regulations on marketing from the vaping industry.

Senate President Pro Tempore Jim Hendren, R-Sulphur Springs, and the Senate public health committee chairwoman, Sen. Missy Irvin, R-Mountain View, have proposed a study of the matter before the next legislative session to build consensus around bills to address vaping.

The state Legislature earlier this year declined to pass any bills aimed specifically at curtailing e-cigarette use despite calls for stricter regulations or higher taxes from public health advocates and public school administrators.

Hendren, whose bill to impose higher taxes on vaping products died in the House of Representatives earlier this year, said in an interview after Monday's hearing that some lawmakers' attitudes toward such legislation are softening as state and federal public health officials have become more alarmed in recent weeks about the negative health effects of vaping.

"I sense more support than there was six months ago during the session, particularly in the House," he said. "There continues to be more and more evidence of long-term health care costs and a huge presence in schools."

E-cigarette use has steadily increased over the past decade and has surged in the past several years. Typically, e-cigarettes consist of nicotine contained in a liquid that is aerosolized and inhaled.

Indeed, on Monday, the federal agency sent a warning letter to Juul -- the most prominent e-cigarette company -- accusing it of illegally marketing its products as safer than cigarettes.

Public health advocates have said that the risks of vaping are still unknown. Federal health officials on Aug. 30 released a report on the first death that could be vaping-related, issuing a warning about the use of vaping products. Five deaths and more than 450 cases of suspected illnesses associated with e-cigarette use are being studied nationwide. The cases include six in Arkansas.

Officials are investigating the specific causes, including links to products that have been infused with cannabinoids or other chemicals.

Dr. Joe Thompson, president and CEO of the Arkansas Center for Health Improvement, said that a month ago he may have recommended vaping to a heavy smoker, but he wouldn't today in light of the mounting illness reports from around the country.

Thompson said the lungs are one of the human body's most sensitive organs and that inhaling any chemical can have detrimental effects.

Debbie Jones, superintendent of the Bentonville School District, told lawmakers that teachers across the state are confiscating 420% more vaping products than in 2016. She added that teachers can only catch a fraction of the e-cigarettes in schools because they're designed to be hidden. Some of the most popular products resemble computer flash drives.

Nearly half of high school seniors have reported using e-cigarettes at least once, according to the Arkansas Center for Health Improvement -- an 11 percentage point increase from 2016. This is despite state law, which prohibits the sale of e-cigarette products to minors.

"We're losing this fight in the schools," Jones said.

He said the Legislature could amend the state's Clean Indoor Air Act to make it illegal to use e-cigarettes in most public buildings. Traditional cigarettes and other smoke-producing tobacco products are illegal in such places.

Fifteen states, including Louisiana and Kansas, have approved excise taxes on e-cigarettes in recent years.

Smith also noted that Michigan and several individual cities across the U.S. have banned flavored "e-liquids."

Gov. Asa Hutchinson said in a statement Monday that his focus is on addressing e-cigarette use among minors, which he said has become a serious issue.

"The key is to reduce usage by our teens, and this starts with education, reducing access and proper monitoring in schools. Dr. Smith's recommendations will be a guide as I work with members of the legislature to reduce the harm among our young people," the Republican governor said.

Hendren said he hopes the General Assembly can find some consensus to pass legislation to address the matter before the next regular session in 2021. If lawmakers can agree, Hendren said, then vaping-related legislation could be considered in a special session or during next year's fiscal session.