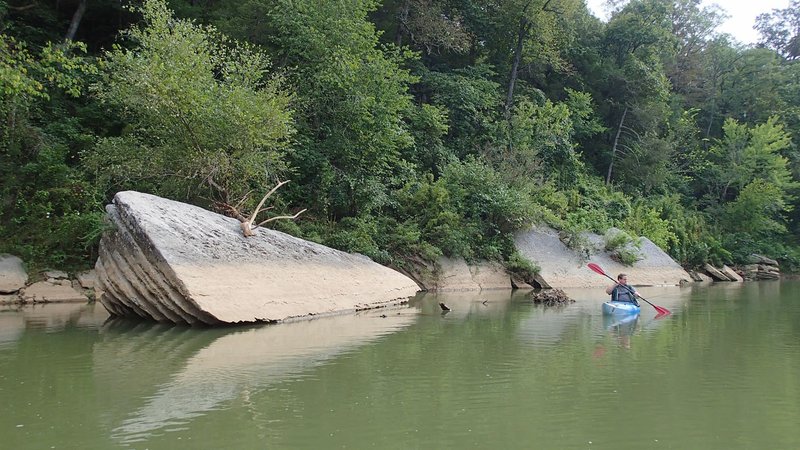 NWA Democrat-Gazette/FLIP PUTTHOFF Slabs of rock add to the scenery and provide cover for fish Aug. 16 2019 on the War Eagle River. Alan Bland of Rogers paddles on the quiet river.

The wrong weather forecast can make conditions right for floating and fishing an Ozark stream.

A sunny and hot forecast meant a big hat, sunscreen and ice cold water were must-have items for a summertime float on the War Eagle River. There's barely enough water in the creek to wet a sandal sole some August days. On this mid-August day, the flow of the War Eagle was picture perfect.

Shoals shimmered with plenty of water for Alan Bland's kayak and for his fishing buddy paddling solo in a canoe. The promised heat wave never accompanied the rising sun. Instead, cool, cloudy weather with drizzle and rain ushered the two downstream.

Bland, of Rogers, chose this War Eagle float trip to break in a new rod and reel he'd received at his retirement party. The shindig celebrated Bland's 41 years with the Army Corps of Engineers, most of them as a park ranger at Beaver Lake.

The trip covered his favorite stretch of War Eagle water, from the Gar Hole low-water bridge to a friend's property near the historic War Eagle bridge where Bland has permission to take out.

Upstream from the Gar Hole is good fishing, too. Another floater arrived and unloaded his canoe and tackle. He planned to fish Lewis and Clark style, paddling upstream then floating back down to the low-water bridge.

"The fourth hole up from here has been really good," he testified. Our friend paddled upstream as we drifted down.

Current carried Bland's kayak around a gentle bend, then another. An hour passed without so much as a kiss on his lure from a fish. No matter, the river was beautiful with low rocky bluffs, wildflowers and bird life ton his gray day. Trees were so summertime lush, green practically dripped from their leaves.

Fishing picked up when the rain started. The gentle shower didn't require a rain jacket and felt divine on faces and shoulders.

Bland cast what may be the best lure going on any Ozark stream -- a little Rebel-brand crawdad crank bait. It'll catch anything that swims. In the next hour Bland caught smallmouth bass, all types of sunfish and some Ozark bass, which most anglers call goggle-eye.

A 15-inch smallmouth got Bland's new rod kinked over double, a righteous way to break in that new pole.

"Can you believe the fight in these fish? And on an ultra-light rod," Bland piped. "It's perfect for these smallmouths."

Three miles into the five-mile float, the two friends gazed at the top of a 100-foot bluff, one of the tallest rock walls on the War Eagle. Decades of ranger work put a heart full of love for Beaver Lake in Bland's soul, but he loves this War Eagle tributary, too.

"This is why we live here. This is why we love Arkansas," he said. War Eagle and the White River are the primary tributaries of the lake, which is where Northwest Arkansas draws its drinking water.

The War Eagle offers a lazy, laid-back river trip perfect for families. Fishing is a main attraction for anglers, with smallmouth bass the prized catch. But they aren't the only fish that prowl the depths.

Proof of the War Eagle's healthy largemouth fishery is in the photos of anglers. Mark Oliver of the Eureka Springs area is proud to show pictures of a trophy War Eagle largemouth bass he caught in 2015. He guesses it weighed 6 to 7 pounds.

Oliver is a retired fisheries chief with Arkansas Game and Fish and was floating that day with Ron Duncan of Springdale, a former Game and Fish commissioner. Nowadays, Oliver has more time to wet a line and fishes all over the country.

"I've found out I'm a better biologist than angler," he said. "But I cast a grub into some trees on the War Eagle and that fish hit it."

The War Eagle River flows through Withrow Springs State Park five miles north of Huntsville. A popular 4.5-mile float trip starts at the old Arkansas 68 bridge, where U.S. 412 crosses the river just upstream. It ends at the park where Arkansas 23 crosses the river.

Hikers can walk the War Eagle Trail that starts at Arkansas 23 and follows the river upstream. Round trip is a two-mile hike.

Print Headline: Down a lazy river