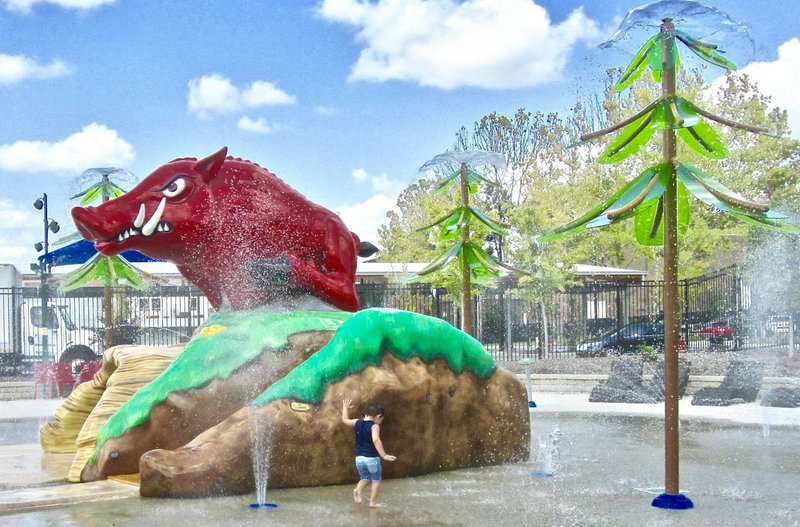 MAD Playscape is a family-friendly attraction in El Dorados Murphy Arts District. (Photo by Marcia Schnedler, special to the Democrat-Gazette)

There's also "a large splash pad with water cascading from imitation pine trees and an oil derrick, as well as from water jets set in the ground." At a time when safety is of so much concern, the fenced site has a single entrance. A concession stand sells snow cones, ice cream, cotton candy — and, for the stray nutrition-minded youngster, "healthy snack options."

MAD Playscape is the final piece in the first of two phases of the $100-million arts district, a venture boldly ambitious for a county seat of 19,000 in an economically straitened part of the state. The kids' park is located just east of Murphy Arts District Amphitheater, the main venue later this month for MAD's annual MusicFest.

The festival's headline acts will be Walk the Moon on Sept. 27 and Brett Young on Sept. 28. Advance-purchase tickets are $50-$90 for one day and $85-$165 for both. There will also be two downtown stages with free performances, plus a mix of other activities.

A year ago, Rolling Stone magazine published a lengthy feature about MusicFest, headlined "El Dorado, Arkansas' New Boom." The story pointed out that MAD Amphitheater's capacity of 7,500 amounts to more than a third of the city's residents. During the oil boom, the population soared from around 4,000 in 1920 to its peak of 30,000 in 1925.

The oil money that fueled El Dorado's halcyon days is playing a major role in the development of the arts district, with substantial funds coming from the nonprofit Murphy Foundation. Notable contributors also include the Walton Family Foundation, the city of El Dorado and the state of Arkansas.

Other completed projects are a 2,000-seat music hall, a cabaret lounge and The Griffin, a well regarded farm-to-table restaurant. These amenities fill the former Griffin Auto Co. Building, whose patio boasts a 110-foot-tall statue of an oil derrick. Phase two's main endeavors will be an 8,000-square-foot art museum and restoration of the landmark Rialto Theatre from the Roaring '20s. 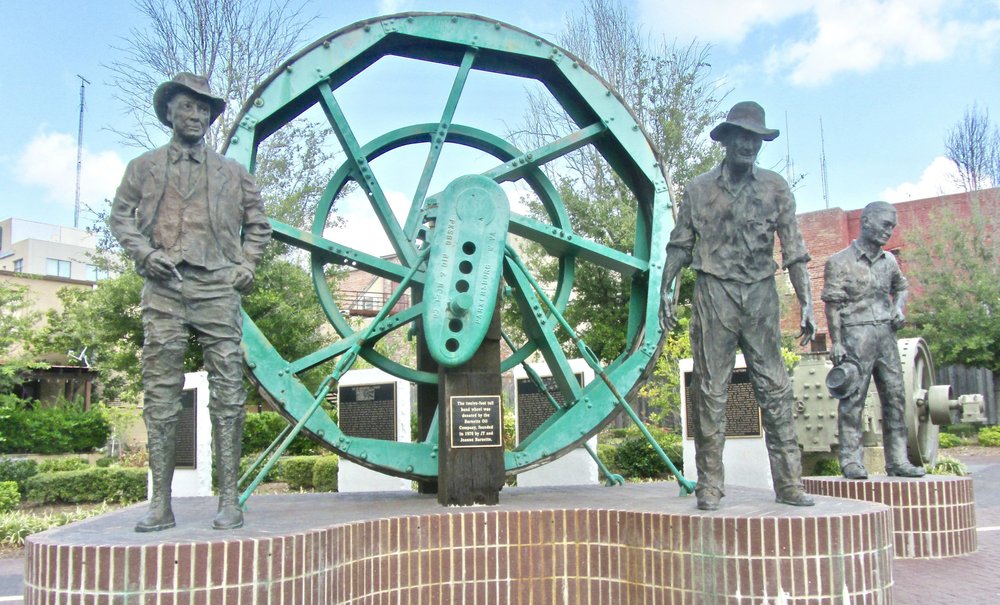 Oil Heritage Park in downtown El Dorado celebrates the oil boom of the 1920s in southern Arkansas. (Photo by Marcia Schnedler, special to the Democrat-Gazette)

El Dorado's oil history is recounted in detail 10 miles north of El Dorado at Arkansas Museum of Natural Resources, a state park at Smackover. The most prominent site in El Dorado itself to evoke those boom years is Oil Heritage Park. At Cedar Street and Jefferson Avenue, it displays vintage extraction gear along with statues of prominent oil men.

A plaque in the park describes in unvarnished terms what it was like here in the early 1920s:

"On street corners, young boys sold moonshine in six-ounce Coca-Cola bottles for $1.25; prostitutes walked the streets and dope peddlers like Smiling Jack and Weasel tugged at people's sleeves. Hamburger Row was filled with characters like Barrelhouse Sue, who had come up from Homer, La., following the boom and sang, danced and solicited in places like Dago Red's, Pistol Hill and Shotgun Valley."

Whatever gentility existed in those madhouse days will be reflected when the Rialto Theater restoration is done. A fine example of Classical Revival architecture, it is part of the El Dorado Commercial Historic District, where churches and office buildings stand as reminders of the short time when El Dorado was ranked as one of the wealthiest American cities.

For information on El Dorado's Murphy Arts District, including tickets and other details for the Sept. 27-28 MusicFest, visit eldomad.com cq or call (870) 444-3007.