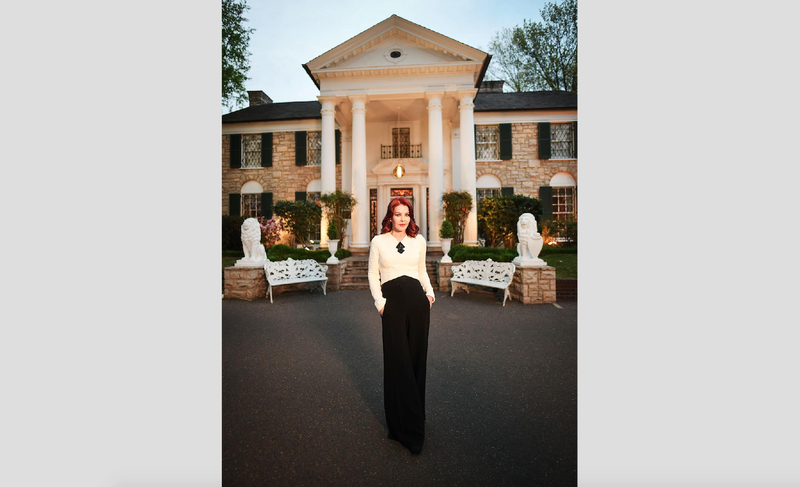 When the teenage girl from Brooklyn visited Memphis in 1962, her boyfriend's home had already been decorated. It didn't need a thing. That was a blessing, probably, because she was so young and hadn't yet honed a sense of style. Her beau, 10 years older, was a rising star, but still a simple Southern man with his own sense of style who liked things clean and free of clutter.

He had bought the house in 1957 with the piles of money he was suddenly making as a breakout singer in the young rock 'n' roll genre. He was a kid who came from nothing who suddenly had something. A kid in a candy store, but one who was always thankful and who liked to share the spoils of his new riches.

That guy, Elvis Aaron Presley, was a Mississippian by birth who had moved to the big city of Memphis to be a singer and musician. Success came for the lanky, handsome guy from Tupelo with the funny moves, and he liked having his mother, father, grandmother and his bandmates and buddies around and wanted to have room for them in his new home. He wanted a nice house, a clean one with everything in its place and furnishings that were modern at the time. A house where he could make a home with a girl he would eventually meet.

The girl, Priscilla Beaulieu, fell in love with him, with the house, with Memphis and with the South, with its old homes that had columns and porches, and the friendly people. The rest of the story is well known, a legend by now, and there's one part of the story that has never changed and probably never will.

The house that Elvis named Graceland looks exactly the same now as it did the first time Priscilla walked in.

"You know, it was actually the way you see it today when I went to Memphis. It was clean, I would definitely say modern. That was the look then, you know. It was a huge change from early American furnishings. This really suited Elvis very well," Presley, now 74, said in a recent phone interview.

The house has become an icon in and of itself. Millions of people from every corner of the Earth have visited and continue to visit every day. Tours go through accessible parts of the house nonstop, yet Graceland never changes.

Today, Graceland is at the center of an empire that keeps the memory of Elvis thriving. It's also a symbol of Southern style, and that's why Presley is so psyched about the new event that she hopes becomes an annual one.

On the weekend of Sept. 27-29, Presley will host "Elegant Southern Style Weekend" at Graceland, which she said is to honor the South and its unique style and also to honor Elvis and his legacy.

In a news release about the event, Presley said: "The years I spent living at Graceland are among the most memorable in my life. There are so many reasons I love Memphis and the entire Southern region of the United States. It's the food, gorgeous homes and gardens, it's the unique combination of style and substance. And, for sure, it's the people. There's just nothing like the warmth of a Southerner. I'm really excited to celebrate Southern Style at Graceland with our amazing lineup of speakers and events."

"I just want to make sure that people know this is going to be a weekend of a lot of different events. There's so many different things to offer and I think there will be something for everyone," Presley said.

Special guests include chef Kelly English, proprietor of Memphis' Restaurant Iris, a popular Creole-French eatery, where Elvis would no doubt dine if he were alive today. It would be hard to compete, though, with the home cooking the star regularly enjoyed at home, though he didn't cook a thing.

"The closest he got to cooking was walking in front of the stove," Presley said, laughing at the question of whether he ever cooked Southern fare for her. That, she said, was covered by Gladys Presley, his mom, and Minnie, his grandmother.

"She was a simple cook, and Grandma Minnie also cooked as well. And it was simple yet all Southern. Baked beans with franks and hush puppies, oh my gosh, minute steaks, I remember minute steaks, and roast! Things that were simple. Corned beef and cabbage, that just came to me! I'm just going off the top of my head trying to remember the things we had. We're going to have all that in the menu [for the weekend]," Presley said.

The menu will have to include iced tea, a Southern delicacy that the New York-born Presley has come to love. After all, she's an honorary Southerner at this point. "I would think so! I have a lot of beautiful memories from there, the South, and of course all my friends. It's in my blood. And I'm still into iced tea. I love all the different variations we have today."

Leigh Anne Tuohy, whose real life inspired the film The Blind Side and who is a motivational speaker and lifestyle expert, will also be on hand for the weekend. American bridal couture designer Pat Kerr, purveyor of antique laces and royal gowns, is also on the guest list, as are Sid and Ann Mashburn, Southern fashion experts who both have lines of clothing at stores in various cities. Expect also Hal Lansky, president of Lansky Bros. Clothier to the King.

Presley knows Elvis would get into the seminars on clothing. She was often ready to go out before Elvis. "I bought a bench and put it at the top of the stairs for when I was waiting for him to get dressed and come downstairs. When he came out, I mean he was really dressed. He was really into the style at that time. That was just him anyway," she said.

Then there is event planner extraordinaire Troy Williams, whose Simply Troy company was recognized by Harper's Bazaar and Brides magazines as one of the world's top event and wedding planners, along with Emmy Award-winning fashion designer Janie Bryant and Southern Living Magazine senior homes editor Zoe Gowan.

The Southern Living event would be a perfect time for Presley to reflect on how she influenced the design of the iconic home. It didn't need much, and she wasn't about to risk cluttering the place up.

"I decorated with pillows, lamps, picture frames. I didn't want to in any way change the style and the love of what he had there already," Presley said.

Presley said her tastes today are definitely a reflection of her unique education at Graceland and Elvis' preferred style followed them through the other homes in Los Angeles the couple would eventually own.

"Elvis and I were looking at homes out here in L.A., back in the, geez, early '60s, '62, '63, '63, '64 ... we changed about three or four times out here. We had an Italian villa in Bel Air where everything was tasteful and clean. I learned a lot along the way. Now, I'm pretty good at it. I do have an eye, and I believe I have good taste to make people feel comfortable."

Today, her home in Los Angeles carries on the King of Rock's love for clean lines. "Very inviting, that was very important for me. Pretty and inviting. I don't mean pretty in too feminine of a way. I don't like things that are too fluffy, you know, where people would think it was too much clutter. Basically, I got all that from Graceland, and learning what taste is and what clutter is and what beauty is," she said.

Beauty, Presley has also learned, is an orchid. She wants everyone at the Elegant Southern Style Weekend to meet The Orchid Guy. That's what Presley calls Art Chadwick, owner of Virginia-based Chadwick & Sons Orchids. "I've known him for quite a few years, and he and I designed my own orchid, the Priscilla orchid. He made that for me," she said. The Priscilla, she said, is violet in color, with a hint of creamy yellow. She has learned to take care of the fragile but beautiful flowers from Chadwick.

"People are a little concerned about their orchids. He's going to change all that. He's going to show you how to do that. People think they are dead when they lose their leaves, but they're just dormant. Don't throw it away!"

The workshops and seminars and speakers will mostly be in the property's new showpiece, The Guest House at Graceland, an elegant hotel with subtle touches of the King throughout and a 450-seat auditorium.

Participants can also find time to tour the other sites on the property — the mansion, Elvis Presley's Memphis entertainment and exhibit complex and the Graceland Exhibition Center.

With all the designers and decorators and experts on hand, one wonders if there is anything about Graceland that Presley would have changed had she had the chance.

You know the room. "That room, the man cave. Well, let's put it this way. When I first went to Memphis in '62, that was a porch, a back porch. We would go out there and sit around, it was enclosed but open. I envisioned a porch swing with flowers and vines, a typical Southern porch, and I'd always wanted that. I don't think Elvis knew what to do with it. It was nice, but we still wanted to close it up in the summertime because, as you know, in the South it gets very hot and there are gnats and flies and things. I really wanted to screen it off ... where you could open the screen in early winter. He just loved to go sit out there but it was just never compatible for all of us.

"I never got my porch. It turned in to the Jungle Room."

A celebration of the food, fashion and design that shapes the modern South

Where: The Guest House at Graceland, 3600 Elvis Presley Blvd., Memphis