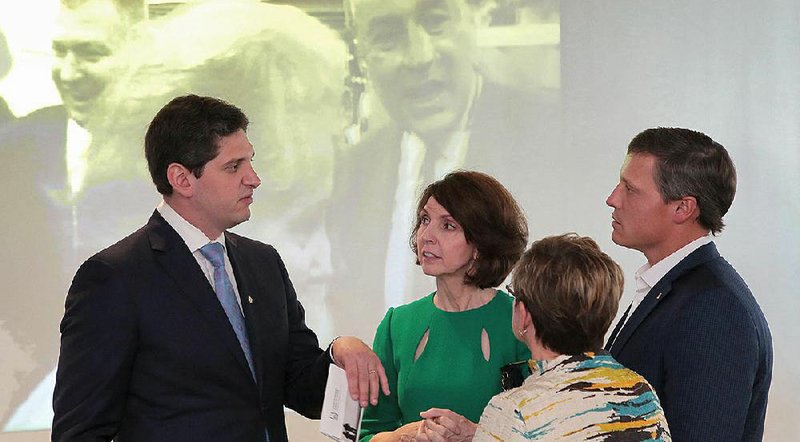 Will Rockefeller (from left); Lisenne Rockefeller; Deborah Baldwin, director of the University of Arkansas at Little Rock Center for Arkansas History and Culture; and Win Rockefeller talk Tuesday at the center while a film about former Gov. Winthrop Rockefeller is screened behind them. UALR announced a $2.25 million gift from the Winthrop Rockefeller Charitable Trust to help the center expand and preserve historical archives and offer learning opportunities and access to grants. More photos available at arkansasonline.com/911rockefeller/ ( John Sykes Jr.)

A $2.25 million gift to the University of Arkansas at Little Rock Center for Arkansas History and Culture will go toward expanding the state historical archives and the opportunity for Arkansans to access them.

The gift from the Winthrop Rockefeller Charitable Trust will allow the center to digitally preserve more records and engage more of the state's residents by offering learning opportunities and access to grants.

The Center for Arkansas History and Culture preserves the papers of former Gov. Winthrop Rockefeller and contains records of other prominent Arkansans, well-known families, organizations and historical events. Archives have been published online in recent years, expanding the center's reach.

"What I am very grateful for is the trust is supportive of the mission of the center, not just the Rockefeller papers," said Deborah Baldwin, director of the center and UALR associate provost for collections and archives.

Rockefeller believed that if more people knew about Arkansas, his adopted home state, "they would value it as much as he did," Marion Burton, the executive trustee, told the audience Tuesday. "They would then want to visit and invest in the place he chose as home."

Bobbitt noted Rockefeller's belief in making information more accessible to Arkansans, something Bobbitt said archives can fulfill in a state with such a diverse history and culture.

In the 42 years of its existence, the Winthrop Rockefeller Charitable Trust has donated more than $300 million, Burton said.

The latest gift will help the Center for Arkansas History and Culture host outreach events and offer opportunities, such as research grants. Baldwin said she wants more hand-on learning to entice more people to access the archives, and she wants to gather archival material from more underrepresented groups.

To do that, she said, staff members are attending neighborhood events in Little Rock and presenting information about the center, as well as reaching out to social and development organizations in the state.

A recent acquisition for the center -- and an example of the center's efforts to include more archives of underrepresented groups -- are papers and photos from the Boys, Girls, Adults Community Development Center in Marvell.

That group develops housing, and provides education for children and practical education for adults in the Delta, said Adrienne Jones, the center's research and scholarly communication archivist. The group has been around for more than 50 years.

Expanding archival material will build a "more complete" historical record of the state's people and organizations, Baldwin said, "so scholars can better explore the 'why' questions of history."

"The center is an active promoter of Arkansas, just like my father and grandfather," he said.

Winthrop Rockefeller was the state's first Republican governor since 1872. He served two terms, from 1967 until early 1971. He lost the 1970 election to Dale Bumpers.

Rockefeller died of pancreatic cancer in 1973.

Winthrop P. Rockefeller was state lieutenant governor from 1996 through 2006, when he died.