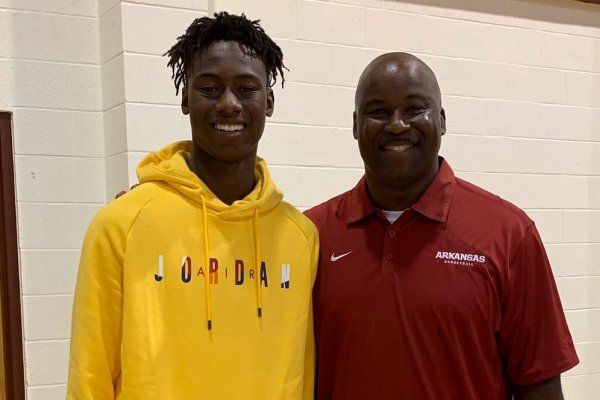 “I mean, it was great,” Robinson said. “A true pleasure for him to come down and see me at school knowing I’m out right now due to a strained hip. We just chatted on how the school year has been so far, and what we’ll look like this year team-wise.”

He made an unofficial visit to Fayetteville in August and called the trip “insane.” He’s looking to making a return trip to Arkansas for the Auburn football game on Oct. 19.

“(I) just (want) to keep growing my relationship with the coaches,” he said.

ESPN also rates Robinson the No. 6 shooting guard and the No. 49 overall prospect in the nation for the 2021 class.

Robinson is one of three members of the 16-under Team Griffin squad with offers from the Razorbacks. Junior guard Trey Alexander and center Daimion Collins also have offers from Arkansas. The three led Team Griffin to a Peach Jam championship in July.

He’s known Crutchfield and his son, Josh, for several years. The younger Crutchfield, who is committed to Northern Oklahoma College, also played for the Team Griffin organization, which allowed Robinson to develop a great relationship with father and son.

“It’s just kind of always been there since me and his son Josh connect so well also,” Robinson said. “I played with him in a few tournaments when I was 15 and he was 17.”